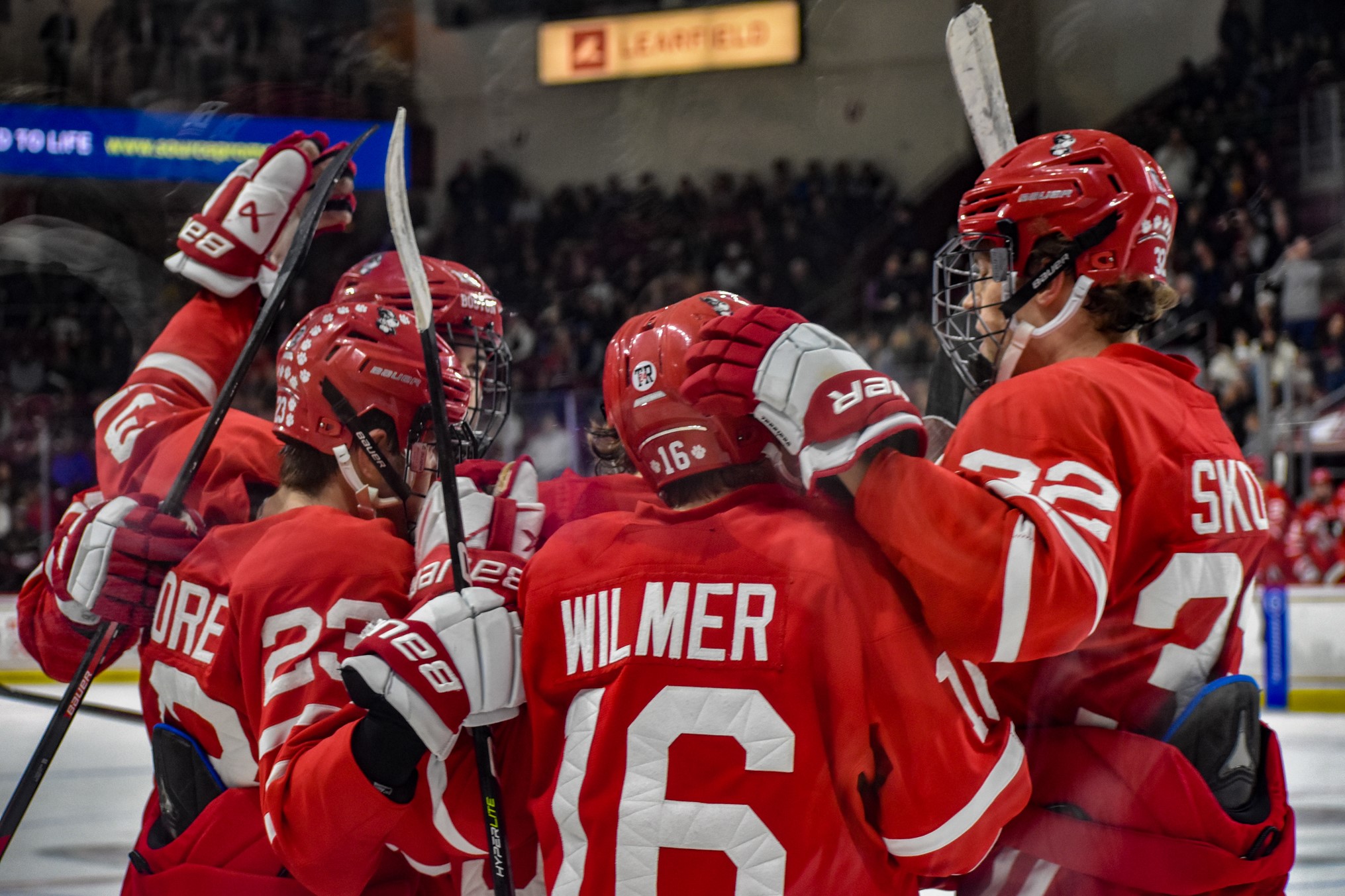 “Wow… that was a heck of a game,” BU Head Coach Jay Pandolfo said. “They’re a really good hockey team.”

Junior goaltender Drew Commesso got the start in net for the Terriers, after stopping 17 of 19 shots against UMass earlier in the week. He responded with a 28-save performance against the Big Red.

“When we struggled for a bit… Drew did a great job,” Pandolfo said. “He did a really great job of holding us in it there for a bit, cause it got a little bit ugly for us for a little while.”

Cornell got the scoring started with less than three minutes to go in the opening frame. After a Cornell face-off win in the offensive zone, the puck was shoveled around the net. Senior defenseman Sam Malinski put a creative move on the BU defense to circle behind the net. Junior forward Gabriel Seger passed the puck across the crease after returning to the front of the net, and after an initial Commesso save, senior forward Ben Berard tapped home the rebound.

BU responded with a goal just five-and-a-half minutes into the second period. Junior forward Nick Zabaneh took the puck from behind the net and skated out toward the right face-off dot before passing the puck to senior defenseman Case McCarthy. McCarthy hammered a one-time shot that senior forward Sam Stevens redirected in front to tie the game. Stevens’ sixth goal of the season established a new collegiate high.

Cornell would respond in the middle portion of the second period to retake the lead, as a misplay by Hutson in the defensive zone gave Cornell another chance. A pretty passing play ended with a goal from Seger, giving the Big Red a 2-1 lead.

“Our power play obviously wasn’t great there in the second period,” Pandolfo said. “Two 5-on-3’s, not getting anything out of it.”

Cornell took their third and final lead on the power play with just over half of the third period left to play. After keeping their passing to the outside, Malinski hammered a slap shot past Commesso to give Cornell a 3-2 lead with just three seconds left on the power play.

BU responded to tie the game for a third time with a power play of their own. After senior forward Matt Brown took an initial shot that was stopped, he cycled the puck back to senior forward Jay O’Brien before getting it back. Brown and captain Domenick Fensore then played catch before Fensore walked in and shot in the top corner for the third-tying goal.

“We have great leaders,” Lane Hutson said. “They show us the way and keep us on board. It’s really helped all of our younger guys a lot.”

With under four seconds to play, BU took their first and only lead in the game. Brown put together a huge keep-in at the blue line before getting the puck over to O’Brien. O’Brien sent a cross-ice pass to Lane Hutson, who put up a quick release that went in and out of the net in the blink of an eye. It was Hutson’s fourth game-winning goal of the season.

“The amount of game-winners he’s had this season, it’s no surprise he netted one of the biggest goals of the year,” Commesso said.

BU’s next game will come against the University of Maine in a home series, beginning on Jan. 20. Puck drop is scheduled for 7 PM.