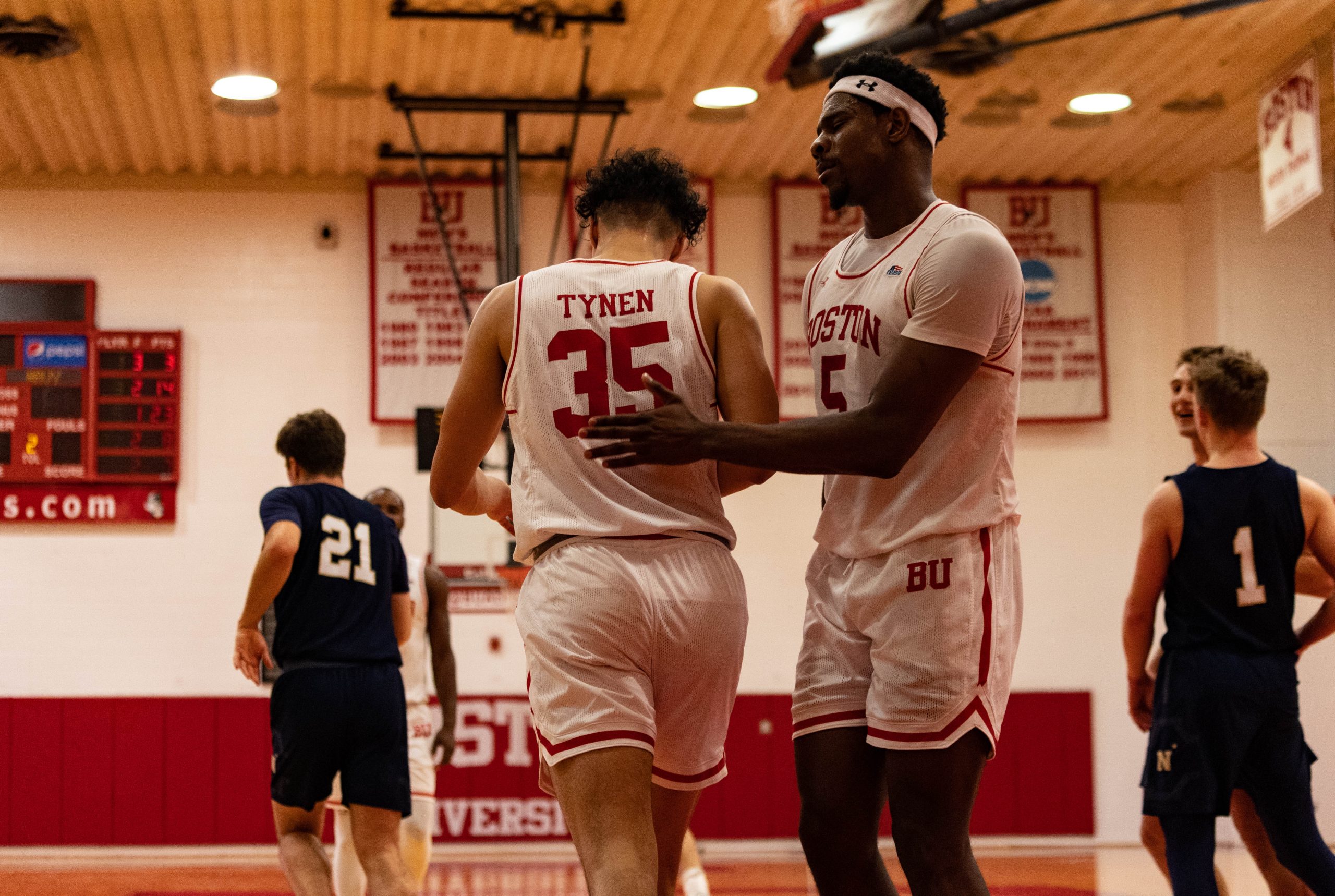 The top two projected teams in the Patriot League preseason poll battled hard from wire-to-wire, as neither team boasted a double-digit lead in the contest.

Early in the game, both teams made it clear that they wanted to attack the paint, as each side had double-digit points in the paint with over seven minutes to play in the first half.

Even though the Terriers were without starting big man Nevin Zink, who missed the game due to illness, they didn’t shy away from getting the ball inside.

Malcolm Chimezie started in Zink’s place. The sophomore forward filled in nicely, as he scored nine points and collected 11 rebounds.

“Malcolm was terrific. This was his best game,” Jones said postgame. “I was really impressed by him.”

Jones also cited that his team missed Zink’s experience, along with his post defense, as he provides size and length to his team.

Both teams struggled immensely from deep in the first half, shooting a combined 6-for-25 from behind the arc in the first 20 minutes of play.

The visiting side took a 32-29 lead into the break, courtesy of a made three from Jonas Harper with just over 30 seconds to play in the half.

Harper, the fifth-year guard for the Terriers, posted a game-high 23 points on 9-for-12 shooting from the floor, along with raining in five 3-pointers.

After conceding a quick 5-0 run to start the half, BU jumped out to a game-high seven-point lead with under 13 minutes left in regulation, highlighted by several Harper threes.

The Raiders fought back to tie the game at 48 with just over 10 minutes to play. They took the lead less than a minute later thanks to a pair of Sam Thompson free throws and never looked back.

Junior forward Jeff Woodward got hot in the second half, pouring in a season-high 14 points on 6-for-8 shooting while adding five rebounds and a pair of blocks.

Along with Woodward’s strong inside play, Colgate found its stroke from outside, shooting 5-for-10 from three in the final 20 minutes.

The Raiders did a great job protecting the ball, registering only three turnovers in the game and none in the second half. On the flip side, the Terriers struggled in that column, turning it over a dozen times.

“We turned the ball over way too much. I thought that really hurt us,” Jones said.

Terriers star wing Walter Whyte struggled from the floor, shooting 3-for-8. Coming back from COVID-19, Jones isn’t worried about Whyte as he continues to work back into his rhythm.

Forward Anthony Morales missed his third straight game, but Jones is hopeful that he will be back soon.

Moving forward, Jones is looking to see some more consistency from his team.

“We play at a really high level and then we can really plummet,” Jones said. “We struggle to play a more consistent game. … I think sometimes the starters struggle with that, and then we bring guys off the bench and then sometimes they struggle. We go through a segment of the game that puts us in a bad spot, and I thought that’s what happened tonight.”

The Terriers can look to find a new level of consistency when they take on Army at home on Saturday at 1 p.m.