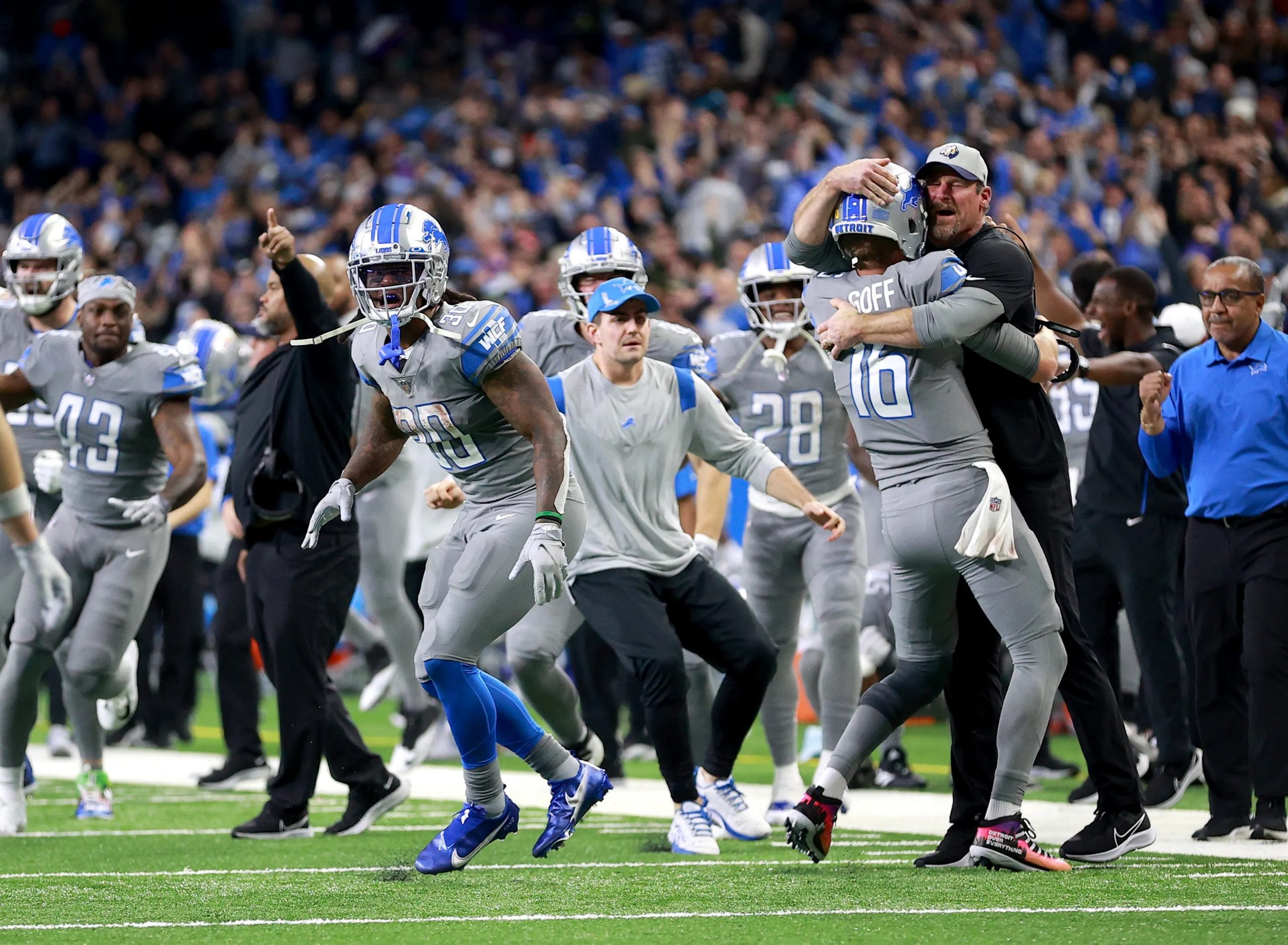 Dr. Dre released his debut album “The Chronic” to critical acclaim; Bill Clinton defeated George H. W. Bush in the presidential election; “Home Alone 2: Lost in New York” was released; and the Detroit Lions defeated the Dallas Cowboys for their first and only playoff win in the Super Bowl era. The commonality in all of this: 1992.

The Lions have endured their fair helping of chagrin over the years. I could mention the 30 years since they last won a playoff game – the longest active drought in the NFL – or the wasted careers of Barry Sanders and Calvin Johnson. What about how they first wore the 0-16 crown of shame? It has reached a point where fans created their own phrase “Same Old Lions” whenever the team inevitably disappoints.

The Lions ended their 2022 campaign on a high note with a win on Sunday Night Football to finish 5-1 against the division and with a winning record for the first time since 2017, falling just short of the postseason.

After hitting one of many franchise lows with the Matt Patricia administration, Dan Campbell and Co. were brought in to clean up the dregs. Campbell expectedly fell flat in his first season, not recording a win until Week 13 against the Vikings en route to a 3-13-1 record.

Season 2 started out much of the same. Untimely fumbles, poor decisions and a defense with more holes than Augusta National led to a “Same Old Lions” performance in an abysmal 1-6 start. Dejected, fans were kicking themselves for once again believing in a product that has far from earned it.

Every week, Campbell stressed how “close” the Lions were, becoming a parody of himself as his seat got hotter. It reached a level of spectacle where owner Sheila Ford had to publicly defend the organization’s direction in the midst of a five-game losing streak. DB coach Aubrey Pleasant was promptly cut loose and tight end TJ Hockenson was shipped up to Minnesota.

Then, momentum shifted. Rookies Kerby Joseph and Aidan Hutchinson combined for three interceptions off Aaron Rodgers in a 15-9 home win against the rival Packers. A fluke win? Maybe, but the defense shut down a Chicago game-winning drive the following week. After that, Jamaal Williams hit the end zone three times to take care of the New York Giants. The Buffalo Bills squeaked out a win on Thanksgiving before Detroit cashed in another three-game winning streak.

With the most national attention on the franchise in recent history, they were gashed by the Carolina run for a 37-23 loss, significantly dropping their playoff chances. Entering Week 18, fate was out of their hands as a Seattle win eliminated them. Not to go without a bang, the Lions went into Lambeau Field in their first primetime game of the season and slayed the heavily favored “team of destiny.” Detroit was playing for nothing but pride and grabbing their division rivals as they fell into the pits of the offseason and out of contention.

What made this team jump six wins in a year and end their season 8-2?

The easiest answer is rookies. Find me another draft class that contributed as much as the 2022 Lions. The defensive rookies were responsible for 20.5 sacks (an NFL record), seven interceptions and four forced fumbles. The star was Michigan’s own Aidan Hutchinson, who is responsible for 9.5 sacks and 3 interceptions, while sixth-rounder James Houston recorded 8.0 sacks in just seven games. With such a successful draft class, Brad Holmes deserves “GM of the Year” if such an award existed.

I mentioned defense, of which all credit goes to defensive coordinator Aaron Glenn. His defense allowed 32.1 points per game in the first eight weeks of the season, while only allowing 20.2 in the final 10.

The hallmark of the team was the offense led by quarterback Jared Goff and offensive coordinator Ben Johnson. In an effort to revive Goff’s career, Johnson tailor-made a system that led to the fourth-most efficient offense in the league.

I can rattle off a number of statistics, but by far the most impressive is Goff’s streak of 324 passes without an interception – the fifth-longest in NFL history. Johnson also expanded Detroit’s playbook with gutsy, inventive calls, putting 335-pound tackle Penei Sewell in motion for a first down, sneaking tight end Brock Wright out the backdoor for a game-winning score and setting up a game-icing play against Green Bay with a bubble screen hook-and-ladder. Additionally, wide receiver Amon-Ra St. Brown eclipsed 1,000 yards, the team set the franchise’s tight end touchdown record and Williams broke Barry Sanders’ franchise touchdown record.

Of course, Campbell deserves all of the flowers he’s receiving. His impassioned speeches and motivation resonate with the young team as they play like they can beat any opponent. Additionally, his timely gambles have ushered in a new era of play-calling.

So, is the notion of “Same Old Lions” dead, and are these the “Brand New Lions?” The answer is no, with an asterisk.

The root of Detroit’s lack of postseason appearance can be traced directly back to their tardiness, starting 1-6. You can’t expect to win nine of your last 10 no matter who you are – even if they should’ve beat Carolina. You can point to millions of minute mistakes across the season, but that’s not why “Same Old Lions” isn’t dead.

You can’t erase over 60 years of shame with nine wins. Linebacker coach Kelvin Sheppard put it best when he said, “to experience six weeks of winning football and think you’ve arrived, that’s a joke to me.” The Calvin Johnson rule, the no-call pass interference against the Cowboys, Aaron Rodgers’ “Miracle in Motown” and more still haunt fans’ nightmares; that’s just the last 12 years. The “Same Old Lions” are a deep cut that needs much more Neosporin.

“Same Old Lions” is not dead, but this season was a symbol of the changing tides, a rise in the “Brand New Lions” moniker. Any other Lions team in my lifetime messes up the Sewell play against the Vikings, lets Zach Wilson come out of the timeout corner with five touchdowns, and lays down for King Rodgers as he leads his team to the promised land.

In order to shed its old skin, Detroit needs to show something besides moral victories. However, this is a “Brand New Lions” team set up to do just that. Campbell and Holmes aren’t going anywhere and the young players on the team are already contributing so much, only developing further with time.

With their quarterback of the future in place and a number of set pieces, the Lions own the No. 6 pick and No. 18 pick in the draft to create depth and fix any lingering problems.Campbell ended HBO’s Hard Knocks by saying the “Detroit Lions will be the team that can and will.” The Lions have proven that they can, it is just a matter of if they will. That answer will come next season.