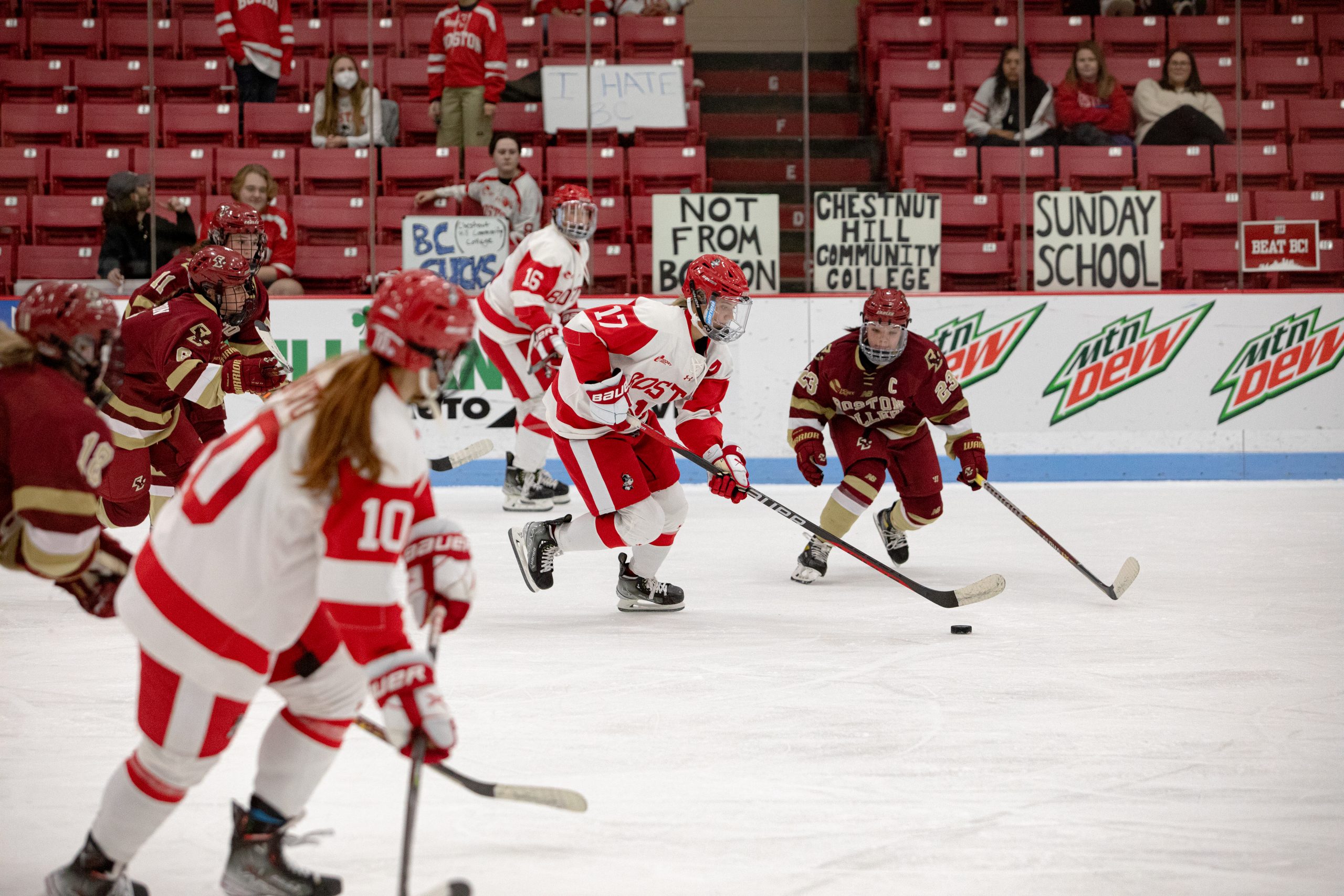 “We just didn’t capitalize; hence we couldn’t change the game’s momentum,” BU Head Coach Brian Durocher said. “We got a goal in the second period and gave ourselves a chance in the third. We just couldn’t cash in. The good news is that we scored a couple of goals tonight to break the streak. But the bad news is that there’s not another game tomorrow.”

After playing eight straight games against nationally ranked women’s hockey teams in November, Durocher exclaimed that these two games against the Black Bears were considered “must-win” situations for the team.

Before Saturday’s tilt, the Terriers had failed to register a single goal for over 200 minutes of game time. As a result, their last goal came against the then-No. 12 UConn Huskies on Nov. 19.

Coming into this game on a three-game losing streak, red-hot forward Haylee Blinkhorn was given a big opportunity as she was elevated to the top line.

With not much action throughout the first half of the opening period, the Terriers made a crucial mistake when they allowed Black Bear sophomore forward Mira Seregély to score a short-handed goal with exactly 10 minutes remaining in the frame. Seregély weaved her way through the whole BU team and scored a beautiful goal, giving her eight points in her past three games.

Freshman forward Luisa Welcke scored with just over two minutes left in the first, giving the Black Bears a 2-0 lead.

Terriers sophomore goaltender Callie Shanahan made 25 saves in the second half of this back-to-back, keeping the Terriers in the game.

“[Shanahan] gave us a chance, like both of our goaltenders always do,” Durocher said.

The Terriers’ hard work and perseverance paid off in the second period when junior forward Madison Cardaci scored her third goal of the season, capitalizing off a Maine turnover behind the Black Bears’ net.

Despite being down 2-1 at the end of the second period, the Terriers generated more chances and got more bodies to the net.

At 13:37 of the third period, BU defender Alex Allan turned the puck over behind her net, allowing Welcke to walk out in front and score her second goal of the afternoon.

Senior Julia Nearis responded quickly for the Terriers, scoring a rebound goal with 10:52 remaining in the contest. The Terriers continued to push for a tying goal only down 3-2, specifically when forward Andi Calderone had two glorious opportunities that were both stymied by Black Bear junior goaltender Jorden Mattison. At the end of the game, Mattison proved to be the difference, as the Terriers failed to capitalize on all of their three breakaway opportunities.

In the third period alone, the Terriers registered a total of 17 shots, 16 of which were stopped by Mattison.

The Terriers will attempt to continue their third-period play in their next game when they host the Holy Cross Crusaders on Friday at Walter Brown Arena. Puck drop is scheduled for 7 p.m.