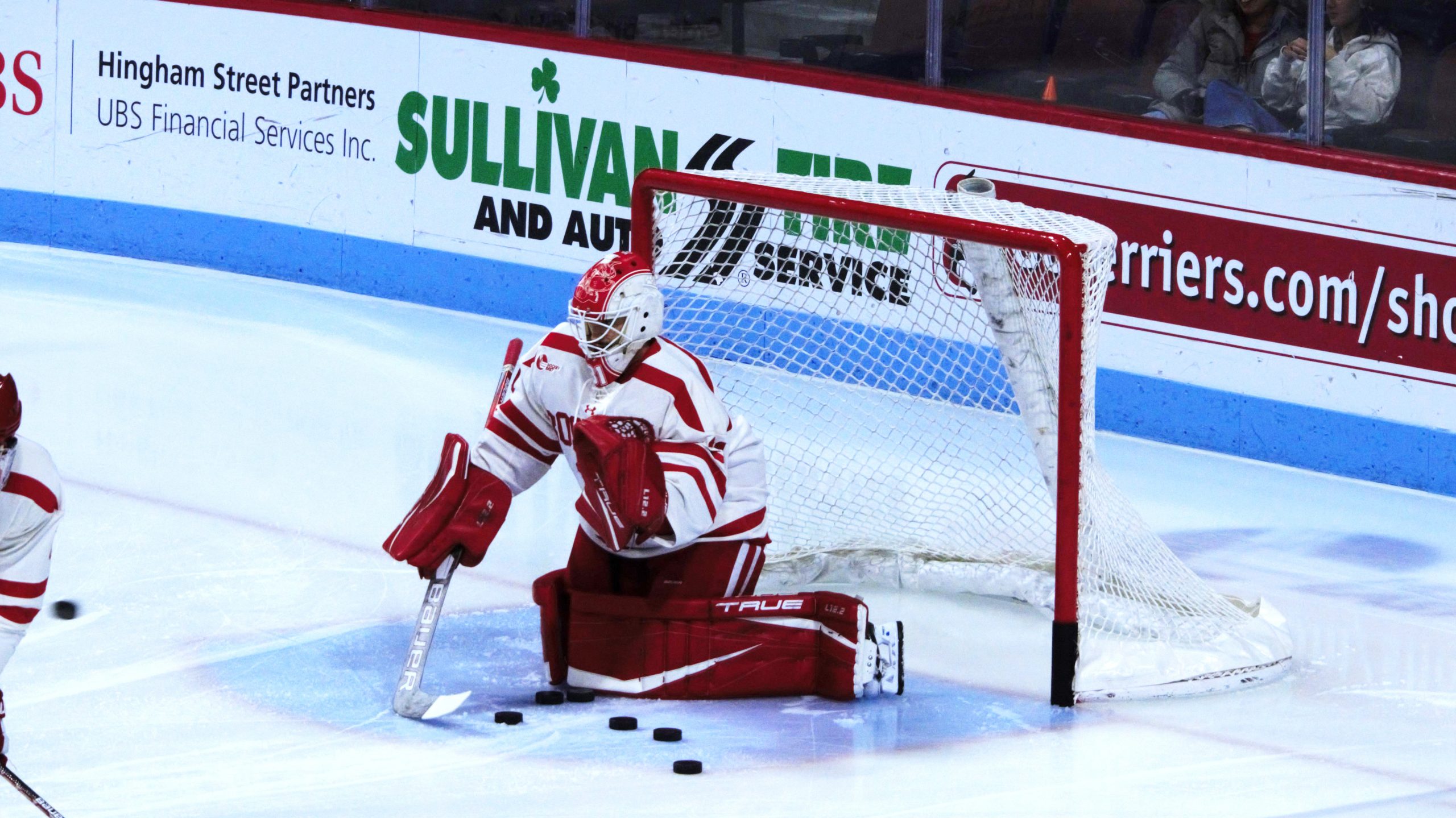 “I think it’s a weekend that we needed to get six points, and we accomplished that,” BU Head Coach Jay Pandolfo said. “I give our guys a lot of credit. We played really well tonight.”

The Terriers dominated play in the first period, leading in shots on net 15-5, but the score remained tied at 0-0 heading into the second.

Sophomore defenseman Ty Gallagher recorded the game’s first shot on net early, but senior goaltender David Fessenden stood strong. The Wildcats did not test junior goaltender Vinny Duplessis until the 11:12 mark. Duplessis made starts on consecutive nights for the first time since Oct. 21 and 22 against UConn, as BU’s starting goaltender Drew Commesso was unavailable this series due to illness.

“I obviously don’t get to play that often, so when I do it’s always a battle,” Duplessis said.

BU largely kept the puck in UNH’s end through the first 20 minutes. When the puck did trickle into their end, the Terriers sacrificed their bodies to block shots in front of Duplessis. They led in blocked shots 7-2 this period.

“I always want to do the best for my team and stand for the guys in front of me because they’ve been blocking shots like crazy all year,” Duplessis said.

The Terriers found themselves short-handed twice in the first half of the second period, but they were able to kill off both penalties. Their penalty kill was a perfect 4-for-4.

“Tonight we took a couple that I’m not sure were definitely penalties, but that’s to the ref’s discretion,” Pandolfo said. “We did a good job. Our penalty kill was excellent tonight, so that was important.”

With 2:26 remaining in the scoreless middle frame, UNH headed to the penalty box for hooking. Every Terrier was active on the man advantage, and senior defenseman Domenick Fensore capitalized one minute into the power play.

Extending his goal streak to four games, Fensore now touts a new season-high in scoring with six goals. Over that four-game stretch, the BU captain has seven points, with five goals and two assists. Senior forwards Jay O’Brien and Wilmer Skoog picked up the assists to give the Terriers the 1-0 lead.

“Dom’s always great on offense. It’s something he works on,” Pandolfo said. “Right now he’s got some confidence, and the puck’s going in.”

In the third period, the Terriers found the back of the net two more times. With less than five minutes to play in regulation, UNH sophomore forward Conor Lovett headed to the penalty box for the second time. BU’s top line was in UNH’s end for a full 90 seconds, and it paid off.

“They’re a talented group,” UNH Head Coach Mike Souza said. “We can’t take that penalty late in the game when [we’re] pressing to come back.”

O’Brien received a pass from Fensore and showed his patience with the puck as he shook off a UNH defender. Opening space in the slot, O’Brien’s wrist shot beat Fessenden to make it 2-0. Fensore and senior forward Matt Brown had the assists. O’Brien also has himself a four-game point streak, but this is his first goal over that period (1g, 4a).

“It’s kind of hockey sometimes. Just got to battle through it,” O’Brien said on his recent puck luck. “It’s nice to just get that goal for the team and just give us a little bit of insurance.”

The Wildcats pulled their goaltender with three minutes to play, and freshman forward Quinn Hutson sent the puck into the empty net to give the Terriers a 3-0 lead.

The Terriers peppered Fessenden with shots all night and led in final shots on net 43-22. Duplessis picked up his fourth career shutout and the Terriers’ first shutout of the season.

“[Vinny’s] a gamer. He enjoys playing in big games,” Pandolfo said. “We know if Drew’s not going to play, Vinny’s going to step in. He’s always going to be good.”

BU now has seven wins in their last eight games as they climb the rankings in their conference and on the national stage.

“Everybody in the locker room is committed to winning,” O’Brien said. “It’s nice to have that kind of confidence as a group going into the third knowing that we know what to do and how to do it.”

Picking up a much-needed six Hockey East points against an unranked-UNH team this weekend, the Terriers will prepare for a conference road trip next weekend against historic rival Boston College. It will be the first matchup without Jack Parker or Jerry York behind the bench for either team in over 50 years as both sides usher in new eras of coaching.

BU will head to BC Friday for the Battle of Comm. Ave at Conte Forum. Puck drop is scheduled for 7 p.m.