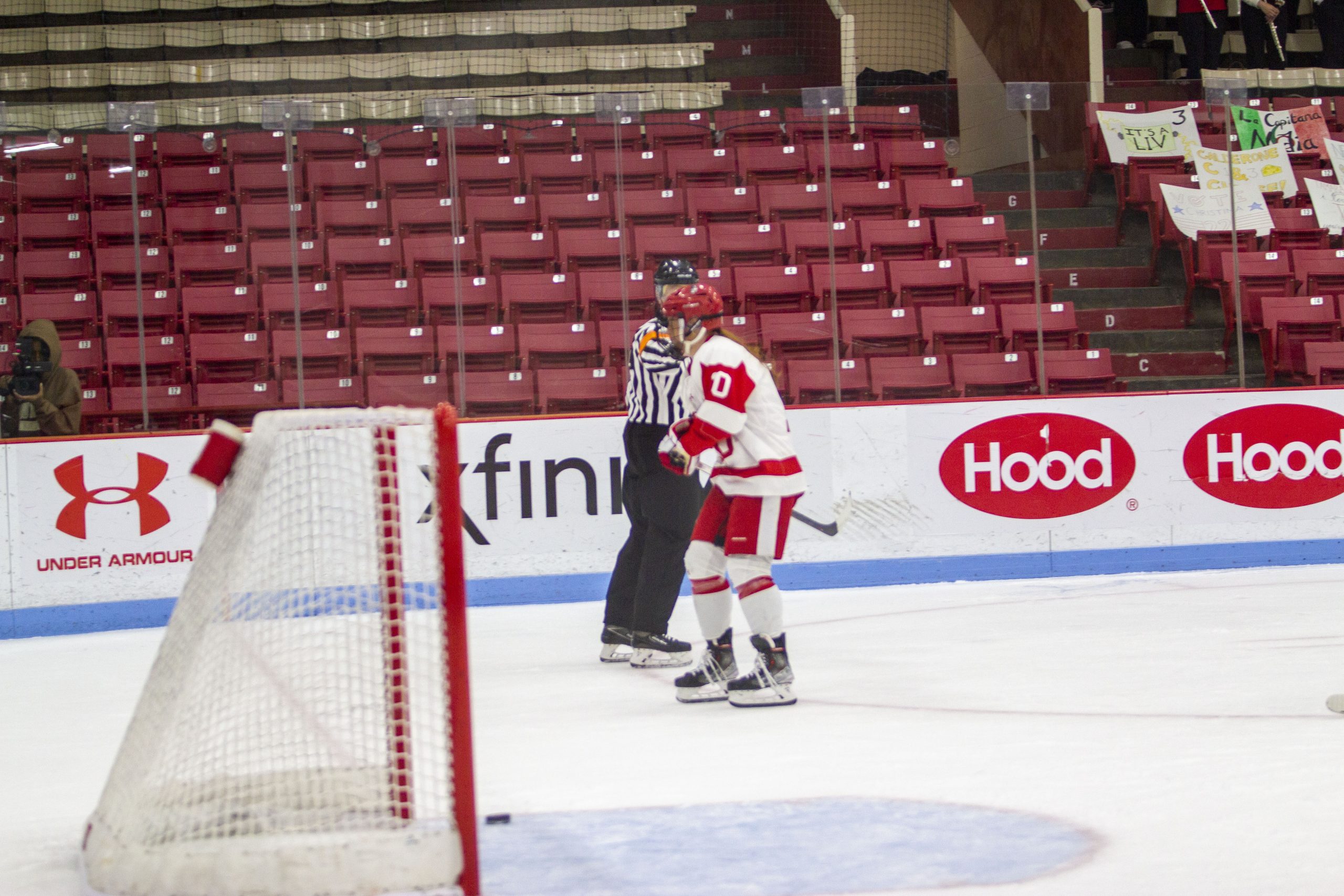 Boston University Women’s Hockey (6-11-0, 5-8-0 HE) was shut out 3-0 by the University of Maine Black Bears (10-10-0, 7-6-0 HE) Friday night at Walter Brown Arena. Following an unsuccessful Thanksgiving tournament in Las Vegas, this marks the third straight scoreless outing for the Terriers.

The first period remained relatively quiet on either side. BU did not record its first shot on net until 8:47 in, which was saved by freshman goaltender Brooklyn Oakes.

Neither team recorded any penalties through the first 20 minutes, and the game remained tied 0-0 going into the first intermission. Although the Terriers sustained more puck possession in the early stages, the period’s shots on net were 8-4 in favor of the Black Bears.

“We came out of the gate pretty well. … I thought we had a lot of the puck position, but we really didn’t turn it into much of anything,” BU Head Coach Brian Durocher said. “We’re disappointed that we couldn’t find a way to execute a little better.”

Starting off the middle frame, BU took an interference minor early. Maine capitalized one minute into the power play to take the 1-0 lead.

Completing a textbook tic-tac-toe goal, freshman forward Luisa Welcke started off the play by making a cross-ice pass to sophomore forward Mira Seregély. From there, Seregély dished it to freshman forward Lilli Welcke, who one-timed it past graduate goaltender Andrea Brändli.

Nine minutes later. Seregély went back to work. Winning a puck battle along the boards, she passed to sophomore forward Alyssa Wruble, who went top-shelf far side on Brändli. After scoring Maine’s game-winner last game, Wruble scored her sixth of the season against BU.

With three minutes left in the second period, the Terriers found themselves in a 5-on-3 penalty kill for a full 1:28. However, the Terriers were able to successfully kill off both penalties unscathed.

“That was the energy boost for us,” Durocher said. “It was a big closing of the period, kept up in the game at two goals.”

In the final 20 minutes, the Terriers found some life, edging the Black Bears in shots 10-7. They received their first power play opportunity early on, but were unable to convert.

Over the middle stretch, neither team’s passes were connecting, and nobody could get set up. With 4:30 remaining in the game, BU received their second power play of the night.

Durocher took the opportunity to pull Brändli early making it a 6-on-4 advantage for the Terriers, and BU had its fair share of scoring chances.

Senior defender Nadia Mattivi made her presence known, taking shots from the blue line. She finished the night with a team-best 10 shots, four on net. At the other end of the ice, the Terriers activated their defensive game preventing four straight Maine scoring attempts on the empty net.

“The third period we threw caution to the wind,” Durocher said. “[We] changed up our system a little more, played a more aggressive forecheck, and got opportunities.”

Nonetheless, in the final four seconds of the game, the Black Bears finally converted on the empty net to put the game away. Lilli Welcke notched her second of the evening to make it 3-0.

Oakes recorded her third shutout of the season, and Brändli finished the night with 26 saves.

“Every game [Brändli] gives us a chance,” Durocher said. “I hope that she’s staying super positive and knows that some good days are ahead.”

The two teams will square off for a rematch Saturday afternoon in the same location. Puck drop at Walter Brown Arena is scheduled for 3 p.m.