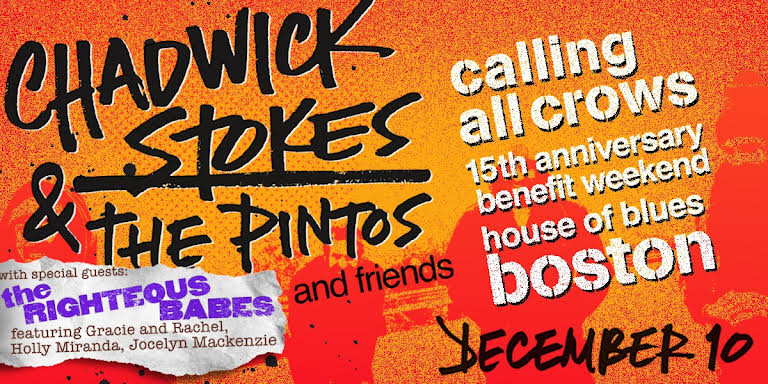 Chadwick Stokes and The Pintos will be performing at the House of Blues on December 10th with special guests, The Righteous Babes. The event is a benefit concert celebrating the fifteenth anniversary of the organization Calling all Crows. Chadwick Stokes Urmston and Sybil Gallagher, his wife and touring manager, started the organization back in 2008 and it has achieved massive success globally.

The non-profit has been created to assist in Feminist Movements and public service. “We have also expanded the number of issues we work on…in 15 years we have worked on a variety of issues from refugee rights to criminalization and mass incarceration, and right now we’re really focused on sexual violence within the music industry,” said Kim Warnick (She/Her), director of Calling All Crows.

Currently two of there major campaigns are “Unlocked Voices” and “#Hereforthemusic.” The first focuses on mass incarceration, and challenges the reality that women are the fastest growing prison population in the United States. This affects the incarcerated well after they do their time with their housing and job security being impacted. “We literally put people out of sight or out of mind when we put them into jail or prison,” said Warnick on the issue. She continued saying, “It disproportionately impacts black and brown people in this country… it mostly is affecting poor people across racial lines.”

Calling All Crows is aiming to bring this to light because of the impact it has on most Americans, including those who have friends or family in the incarceration system.

The “#Hereforthemusic” campaign “works to build true safety with all parties who come together to create a show or festival,” says the organizations website. Warnick states that “We have now worked with over a 100 artists, venues, and festivals.” Artists that the organization has worked with include Clairo, Dispatch, and LAR. It involves asking what harassment policies are in place before performing a show or how they train their staff. “We worked with Courtney Barnett’s team and the Here and There festival…we work with Bonnaroo,” according to Warnick. On top of the staff working at the shows, they also focus on helping fans feel more comfortable at the venues.

The benefit concert at the House of Blues concert is the first big event for the organization in a couple of years. “To get to see our community again and new supporters and old supporters…it’s just very exciting for us,” said Warnick.

Additionally the show lets fans get involved with public service by running a project during the afternoon of December 10th at the Foundation room of the House of Blues. You can sign up to take part in the project here. You can also purchase tickets to the show later that night here.