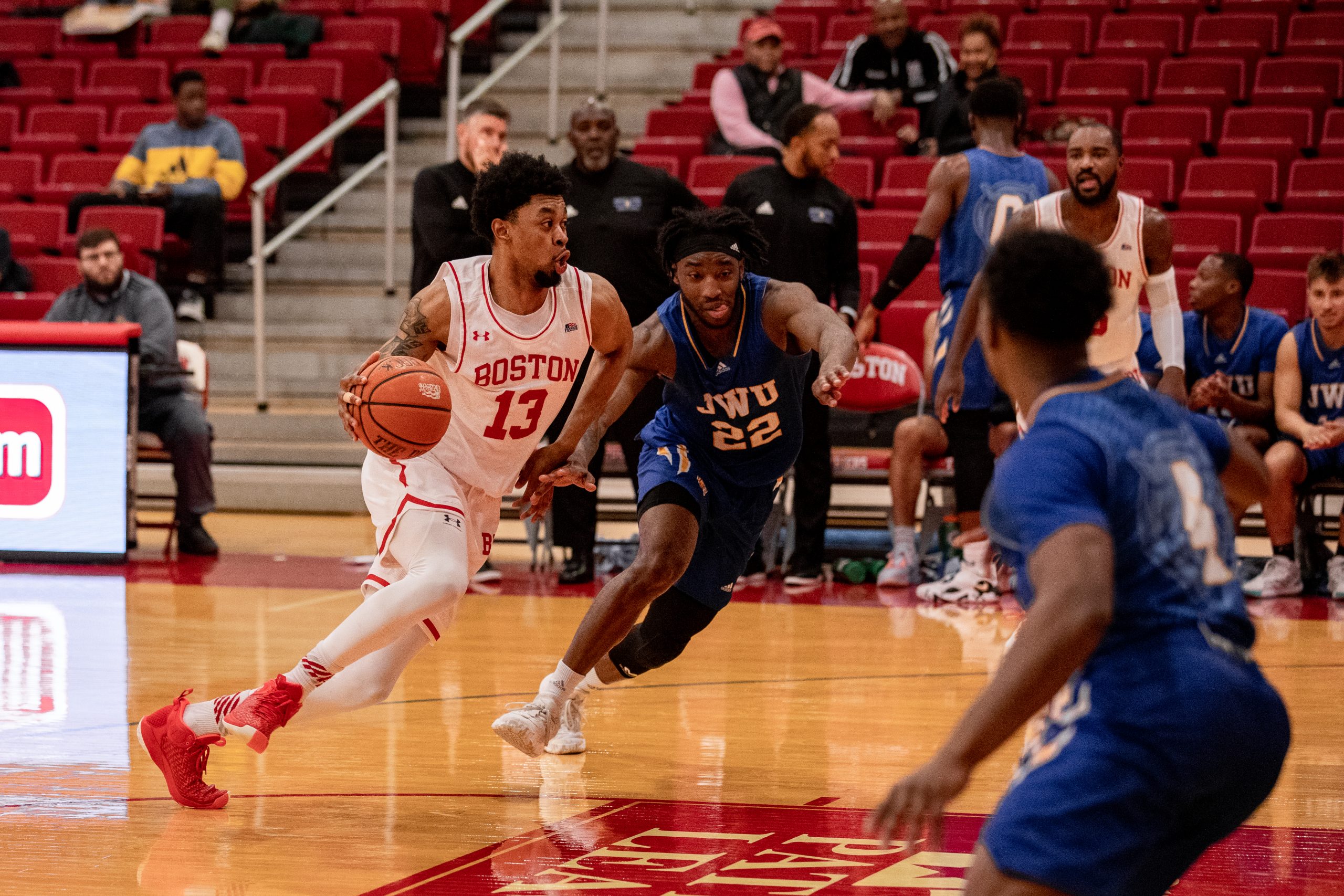 Mid-way through the second half at Lawler Arena in North Andover, BU senior guard Ethan Brittain-Watts drained a corner three to give the Terriers an eight-point lead.

A blown kiss to home fans in the front row followed.

There was no looking back for Boston University Men’s Basketball (5-4), who silenced an energetic Merrimack Warriors (1-8) crowd with a 22-5 run in the second half to win their fifth game of the season 68-54.

After three straight losses at the Cream City Classic in Milwaukee over the weekend, the Terriers finally found their stroke from beyond the arc, making eight 3-pointers from 17 attempts.

“It’s just getting back to playing the way we know we can play,” BU Assistant Coach Curtis Wilson said.

“It was tough sledding out there [in Milwaukee], it was just nice to get back,” Wilson said.

But it wasn’t a cakewalk for Wilson’s team. An invigorated Merrimack, in their first home game against a Division I opponent of the season, held serve with the Terriers throughout the first half.

After a 9-0 Warrior run that started in the last minute of the first half, the game was tied 38-38 with 16 minutes to play.

Then BU put their foot on the gas. An immediate floater from graduate guard Fletcher Tynen followed, and a few possessions later, a three from graduate wing Walter Whyte, his second made-three in 22 attempts over the last four games.

Minutes after that, Brittain-Watts blew the good-bye kiss.

“It does kind of wear on you a little bit, especially shots that you practice every day and you make for the most part,” Wilson said of his team’s recent shooting struggles.

“When you see the ball go through the net, it really helps you mentally in a lot of ways,” Wilson said.

The Terriers shot 50% from the field and 47.1% from three after an ice-cold stretch in Milwaukee, which Wilson credits to his team’s ability to get into the paint.

“Inside out. We wanted to play inside out,” Wilson said. “We just felt like if we can get the ball in [the paint], then we can do some damage.”

Graduate guard Jonas Harper led the way with 15 points, including 3-pointers on three straight possessions late in the second half to extend the Terrier lead to 19 with just over four minutes left.

Britain-Watts provided 12 points off the bench on 5-for-6 shooting as junior guard Damon Tate started for the first time this season, contributing eight points and making two 3-pointers.

Whyte, after his first slump of the season culminated in a 4-for-17 shooting performance against UC Davis on Monday in Milwaukee, responded with a double-double, scoring 12 and hauling in 10 rebounds.

Head Coach Joe Jones was “under the weather” and missed the game, but his condition is not COVID-related, according to sports information director Scott Ellis.

“We know what we’re supposed to do, we’re basically just an extension of him,” Wilson said. “Coach Jones is our leader and he gives us confidence throughout the whole year.”

With three graduates and five seniors on the roster, Wilson acknowledged the experience of his team as an important aid in these types of situations.

Defensively, the Terriers forced 15 turnovers, highlighted by three straight steals in the closing minutes of the first half, including two from Harper, that were finished with a 3-point play to cap a 10-0 run.

Merrimack senior forward Jordan Minor finished with 21 points as the Warriors shot just 40% from the field and 19% from three.

But Wilson left plenty of room for defensive improvement.

“I thought we allowed them to play a little bit too much 1-on-1, and we didn’t do a great job of helping each other early in those situations,” Wilson said.

“They have some pretty talented guys out there, especially Minor inside. If there was one thing I thought tonight we needed to do a better job of that was it.”

And there’s certainly more than one thing the Terriers can improve on:

“All areas,” Wilson said without hesitation.

BU will have a chance to build off their critical, yet imperfect, rebound win as they travel to South Bend for a showdown with Notre Dame on Wednesday at 7 p.m.