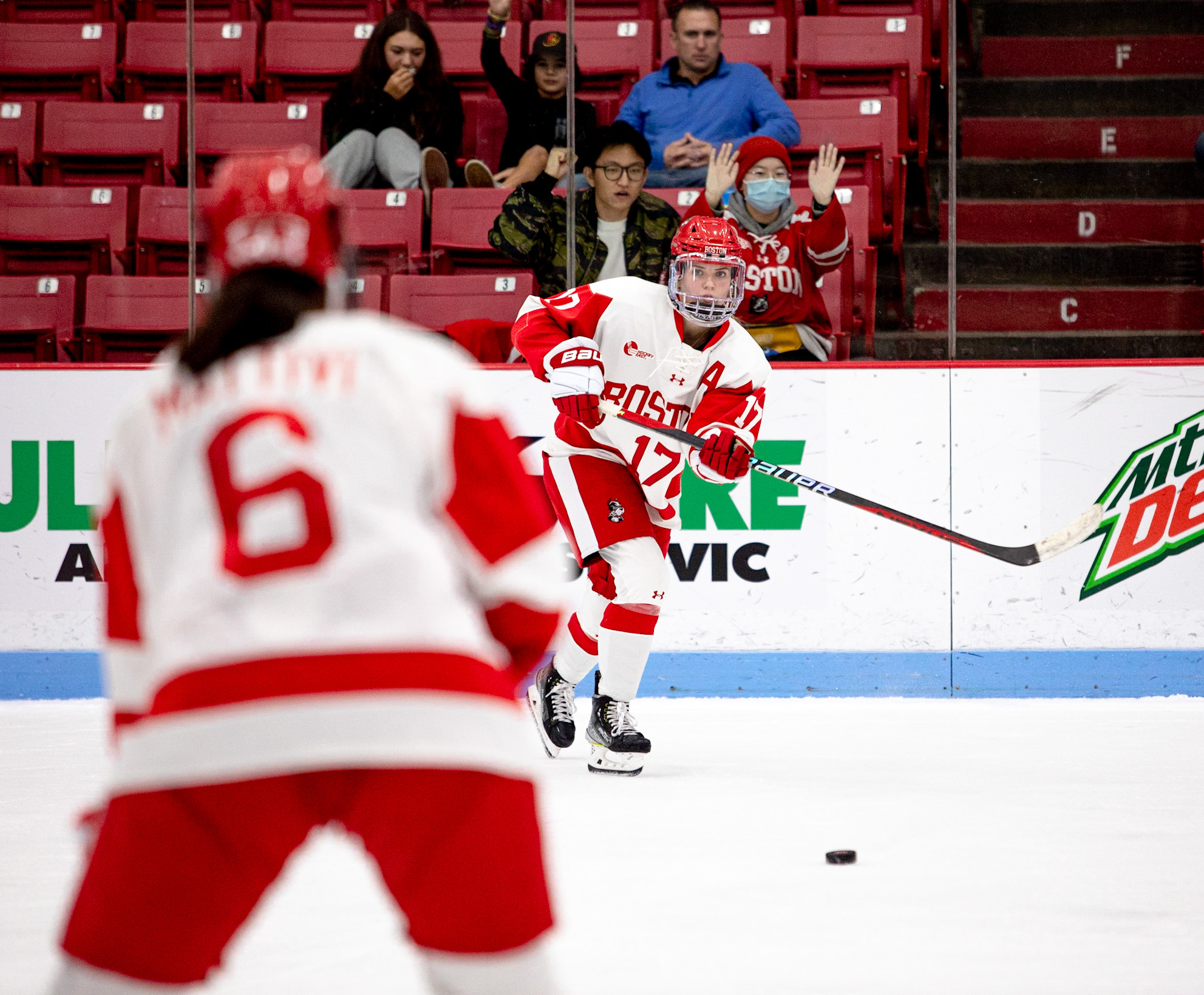 Boston University Women’s Hockey (6-10-0, 5-7-0 HE) was shut out for the second consecutive game, 3-0, against the No. 12 Penn State Nittany Lions (11-8-1) in the consultation game of the Henderson Collegiate Hockey Showcase, which took place at the Dollar Loan Center in Henderson, Nevada.

“I think other than the results of the two games that were disappointing, it’s a fun place,” BU Head Coach Brian Durocher said. “It’s been a lot of fun. You look at Yale, Penn State and Minnesota, who have all been in the top 10 this year, so you’ve got some really good teams, and everybody likes to measure themselves against the top teams.”

After going with graduate goaltender Andrea Brändli in Game 1 of the tournament, BU handed the reins over to sophomore goalie Callie Shanahan. Shanahan responded with one of her best games of the season, stopping 40/43 shots from the Nittany Lions in the loss.

“She gave us a chance to be in this game, to win this game, but we couldn’t get that goal that changes the complexion,” Durocher said.

Penn State got on the board first thanks to the first collegiate goal from freshman forward Maddy Christian. Freshman defender Leah Stecker walked through the open right circle before firing a pass into the slot, and after a scramble, the puck redirected off Christian’s skate and past Shanahan for the game-opening goal.

Despite three power play opportunities in the first period, BU was unable to generate any goals. The shots were 11-10 in favor of Penn State after 20 minutes of play, the Terriers’ best period of the game.

“We did some things right, but we just didn’t put it in and therefore you don’t gain momentum,” Durocher said. “You don’t get confidence and you don’t change the complexion of the game because we got three power plays in the first period and didn’t score, and then they get one off a skate in a scramble around the net and all of a sudden it’s 1-0.”

The middle frame saw the Nittany Lions take over on the shot counter, outshooting the Terriers 18-4 and doubling their lead. After a turnover in the neutral zone by BU, Penn State got some offensive zone time before senior defender Mallory Uihlein sent a pass down low to captain Kiara Zanon. Zanon put a one-touch pass right onto the stick of junior forward Maeve Connolly, who fired it past Shannon for her second of the year to put Penn State up 2-0.

Early in the third period, Penn State got their lead up to three. As the Terriers attempted to enter the offensive zone, Penn State senior defender Izzy Heminger poked the puck right out to the neutral zone.

Zanon and freshman forward Katelyn Roberts went the other way in a 2-on-1, and Zanon got the puck over to Roberts. After being denied by Shanahan on the first opportunity, Roberts put home the rebound for her second of the season.

Despite the 3-0 deficit in the third period, the Terriers fought valiantly to get one on the board. The shots ended 11-7 in favor of Penn State in the final frame, and 43-21 overall. Nittany Lions junior goaltender Josie Bothun stopped all 21 Terrier shots for her third shutout of the season.

“I was disappointed that we didn’t execute real well,” Durocher said. “I don’t think we came out in an intelligent way to start the game, but it was only 1-0 thanks to some good saves by Callie Shanahan, and once we got into the second and third period, I just felt like we sort of shot ourselves in the foot because we did not execute.”

The Terriers return to Walter Brown Arena next weekend, as they take on the University of Maine in a two-game homestand on Dec. 2 and 3. Puck drop for game one is scheduled for 7 p.m.