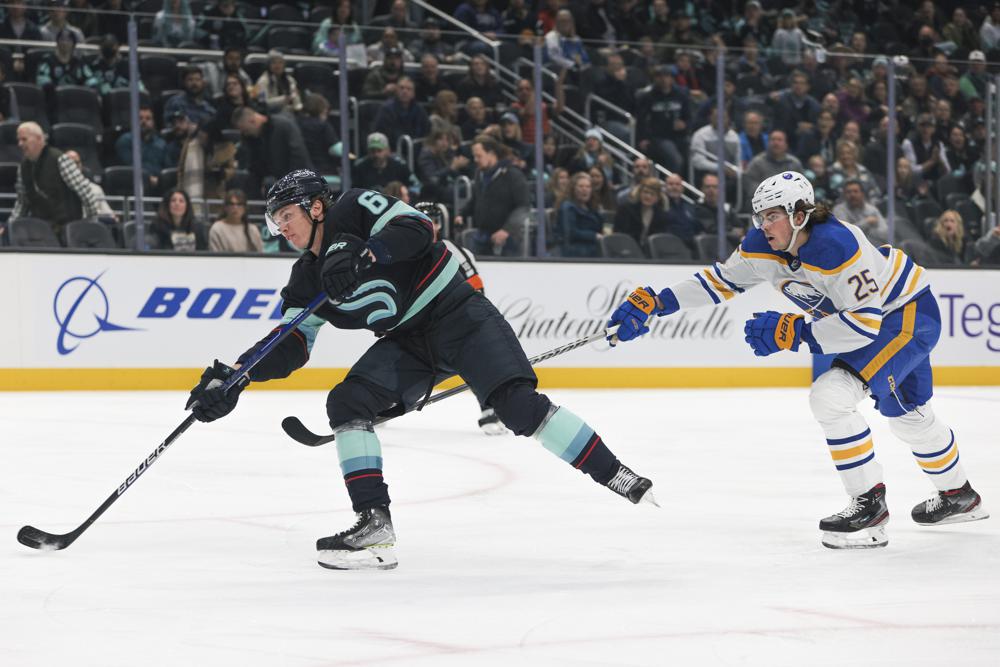 As the 2022-23 NHL season approaches the two-month mark, the rookies have made their presence known. Although there has not been one prominent figure leading the Calder Trophy discussion, many names have still made their case. Here are four of the top rookies who have stood out thus far.

The Seattle Kraken have taken a big step forward from their inaugural season, and forward Matty Beniers has been a big part of that. After finishing dead last in the Pacific Divison last season, the Kraken sit comfortably in second place through seven weeks of gameplay. It took the expansion team 28 games to find their first 10 wins last year, but they already have 11 through 19 games played this season.

Taken second overall in the 2021 NHL Entry Draft, Beniers has lived up to his draft stock. He lit it up for the University of Michigan last season, but has officially made his transition to the NHL. The Massachusetts native is averaging 17:17 time-on-ice a night; the second-highest among rookie forwards. Beniers leads all rookies in points with 14 (6g, 8a) in 19 games played. Slotting in on the second line, the center boasts a 45.2% face-off win percentage.

Beniers’ biggest highlight game came on Nov. 23 during the Kraken’s 8-5 win over the San Jose Sharks. The 20-year-old collected his first career three-point night (1g, 2a) and had a plus-four rating. He registered the first point as a primary assist on Vince Dunn’s goal to tie up the game 2-2. Beniers carried the puck on his stick into the offensive zone and set up a tap-in for Dunn in the slot.

He picked up a secondary assist on Jaden Schwartz’s game-winner, but again, Beniers did most of the work. The young phenom showcased his 200-foot game as he broke up a San Jose play, took possession of the puck, led the Kraken rush and assisted on the goal.

Finally, he sealed the deal with a goal of his own. On a feed from teammate Jared McCann, Beniers’ perfectly placed wrister beat goaltender Kappo Kahkonen. The Kraken will surely depend on Beniers as they attempt to maintain their playoff positioning.

After a strong first month, the Buffalo Sabres have regressed during November, putting up a 3-8 record. Nonetheless, defenseman Owen Power has made the best of his situation and proven why he was drafted so high. Taken first overall by the Sabres in 2021, Power was drafted one spot ahead of former UMich teammate Beniers.

Following the conclusion of his 2021-22 collegiate season, Power got a taste of the NHL, but the newly turned 20-year-old has quickly cemented himself as a cornerstone of Buffalo’s lineup this season. Averaging 23:38 TOI per night, Power ranks first among all rookies in ice time. On his team, he only trails fellow first-overall pick, Rasmus Dahlin.

The two have played a string of games together on the first defensive pairing with defensemen Henri Jokiharju and Mattias Samuelson missing games with injuries. Tasked with this bigger role, the 6-foot-6 blue liner has not faltered.

Dahlin is having a breakout season, ranking second in points among all defensemen, and Power has also tapped into his offensive game. Ranking second among all rookies, the Ontario native has recorded nine assists through 20 games played.

Power had a multi-point effort and standout game on Nov. 2 in Buffalo’s 6-2 win over the Pittsburgh Penguins. Down 2-0 with time expiring in the second, the Sabres cut Pittsburgh’s lead in half thanks to Power’s relentlessness and J. J. Peterka’s finish.

In the third period, Buffalo climbed their way back to tie the game 3-3. In a highlight reel play, Power faked a slap shot before passing to Victor Olofsson, who had a wide-open net. This goal led to the eventual comeback, and he ended the night with four shots and a plus-three rating. If Power continues to find this success, the two-way player will be vying for rookie of the year.

After discussing two of the most coveted rookies in the Calder race, Matias Maccelli is a lesser-known name who warrants the same amount of attention. The 2019 fourth-rounder has been an offensive force for the Arizona Coyotes all season long. Maccelli has posted 11 points (1g, 10a) through 17 games. This ranks him second in points and first in assists among all rookies. In his first multi-point effort of the season, the Finnish forward recorded assists on both of the Coyotes’ goals on Nov. 3 against the Dallas Stars, a 7-2 loss.

Maccelli notched his first goal of the year Nov. 8 in the Coyotes’ 4-1 win over the Sabres. This game-winner came on the power play, an area of the game he has perfected. Seven of Maccelli’s 11 points have come on the man advantage, tying him for first among all rookies.

After tearing it up in the American Hockey League, the 22-year-old drew into the Coyotes’ lineup at the end of last season, picking up six points over 23 games. Arizona will by no means be competitive enough to make the postseason, but Maccelli has already greatly improved his game this season.

While the league gushes over the Vegas Golden Knights’ Logan Thompson, one rookie netminder that also deserves the spotlight is the Edmonton Oilers’ Stuart Skinner.

Born in Edmonton, the hometown kid has put up impressive numbers thus far. The .500 Oilers have not reached their full potential yet this season, but Skinner has done his part to keep them in playoff contention. Through 10 starts (4-5-0), the 2017 third-rounder owns the league’s 11th-best save percentage (.921), which only trails Thompson among all rookies along with his goals against average (2.78).

Skinner had a 40-save performance Nov. 12 in Edmonton’s 4-2 win over the Florida Panthers. The Panthers lead the league in most shots per game with 40.4. In his most recent win, the 6-foot-4 goalie reigned victorious against the Golden Knights on Nov. 19. Handing the leading Western Conference team their first overtime loss of its season, Skinner registered 31 saves in a 4-3 OT win.

As starter Jack Campbell has struggled all season long, Skinner has had to come up big. Campbell holds the league’s third-worst GAA (4.15). However, the Oilers have not exactly been kind to their last line of defense. They rank 28th in the league for most shots against with 34.2; their penalty kill ranks 29th (72.2%). If the Oilers truly want to make a playoff run, they cannot solely rely on Skinner and their top-heavy offense.