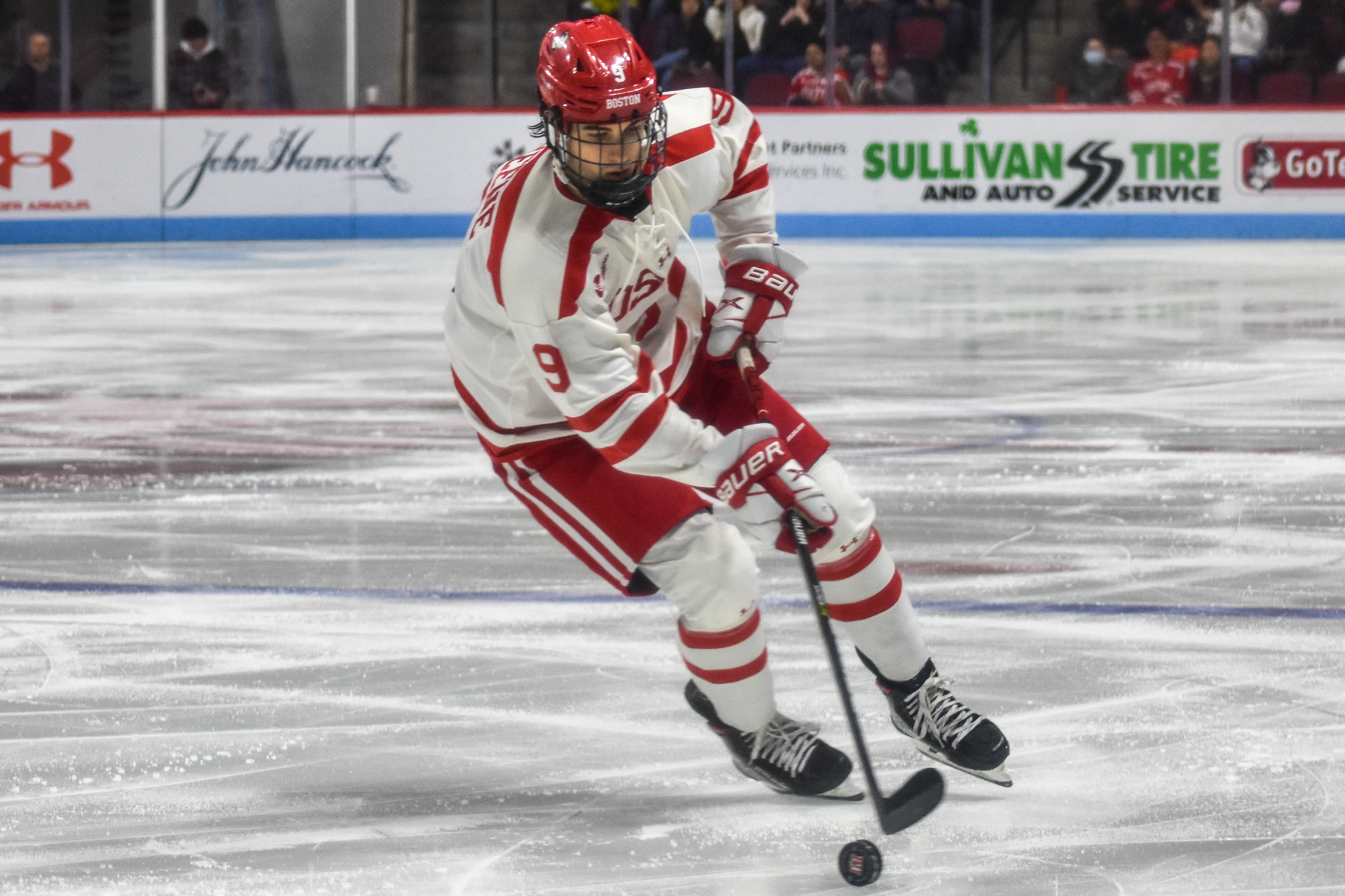 Thanks to two goals from freshman defenseman Lane Hutson and a 26-save performance from junior goaltender Drew Commesso, No. 11 Boston University Men’s Hockey (8-4-0, 5-3-0 HE) defeated the No. 19 Notre Dame Fighting Irish (6-7-2) 5-2 in a pre-Thanksgiving showdown at Agganis Arena.

“Overall, we were pretty good,” BU Head Coach Jay Pandolfo said. “I still think there’s some pockets of our game where we have a chance to put a team away and I thought we let them hang around a little bit too long, but overall, happy with the effort.”

The first period of play was the most even 20 minutes of the matchup between the two teams. BU struck first with a goal by Hutson at 9:34, his fifth of the season. His goal was assisted by senior forward Matt Brown and senior defenseman Case McCarthy.

“[Brown] made a great play to me as I was coming up ice,” Hutson said. “I beat the first forechecker and then I grabbed the middle of the ice, and ‘Brownie’ was there and I knew my gut had told me there was a good chance I’d get it back and it ended up going in.”

Notre Dame tied up the score at 16:23 with a goal by graduate defenseman Ben Brinkman to make it 1-1.

The period ended with the shots at 10-9 in favor of Notre Dame. BU had two power play opportunities in the first and Notre Dame had one, but neither team scored on these chances.

During the second, BU began to gain the momentum that they would hold for the remainder of the game. The Terriers scored the only goal of the middle frame, courtesy of their captain, senior defender Domenick Fensore to take the 2-1 lead. Fensore scored at 7:49 into the period and was assisted by sophomore defenseman Ty Gallagher and junior forward Luke Tuch.

BU’s biggest play came when they were up 2-1. After an initial save from Commesso, the puck trickled behind him and into the blue paint. Junior defender Cade Webber dove behind Commesso and swiped the puck out of danger before Notre Dame could tie the game.

BU outshot the Fighting Irish in the second period 16-11. Both teams got two penalties each, but the only goal of the period was scored at even strength.

Hutson got his second tally of the night just 35 seconds into the third period, with the teams at 4-on-4, to put BU up 3-1.

“We wanted to make sure we had a really good third period,” Pandolfo said. “We only have an exhibition game this weekend, so we know we wanted to end this stretch playing the right way and doing the right things, and it’s obviously nice to get a [goal] there to start the third, gives you a little confidence as a team.”

Notre Dame junior forward Landon Slaggert netted what would be the Fighting Irish’s second and final goal of the night at 4:36.

At 7:39, Fighting Irish graduate forward Jackson Pierson was sent to the box for two minutes for cross-checking. Brown took advantage of the Terriers’ opportunity and got his third point of the night and BU’s fourth goal at 8:36.

The final goal of the night was scored roughly halfway through the third at 10:40 by senior forward Sam Stevens off a redirect on Gallagher’s shot. Gallagher was originally credited with what would have been his first goal of the season, but it was later given to Stevens.

Aside from the Pierson penalty, there were three others throughout the period; two for BU and one other penalty for Notre Dame, but only the Pierson crosscheck resulted in a goal. Despite Notre Dame trailing for the entire third period, and trailing by multiple goals for the majority of the period, the shots on goal for the final 20 minutes were 18-7 in favor of BU.

BU led total shots on goal 43-28, their fourth game in the last five contests with 40+ shots.

While BU will not play another regular season game until Dec. 2, they have an exhibition matchup this Saturday, Nov. 26 against the US U-18 national team for Youth Hockey Night. Puck Drop at Agganis Arena is scheduled for 2 p.m.