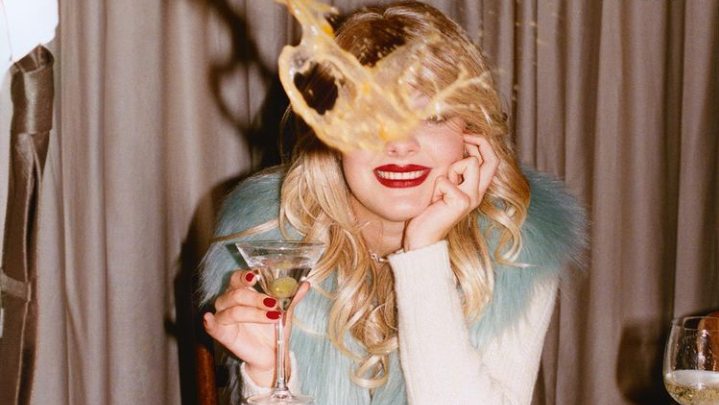 The things I would give to be a badass, bass-slinging sensation like Sabrina Fuentes.

With an energy that demands attention, Sab hops on stage and begins the show with “Heaven” from the band’s latest album “Makes Me Sick Makes Me Smile.” This gritty track is the perfect start to the show with Sab repeatedly pleading “I need you” into the mic. Honestly, I could spend forever gushing about Sab, but Pretty Sick isn’t complete without guitarist Wade Oates and drummer Austin Williamson.

In their newest release, the NYC-based alt-rock band pays homage to the artists in New York’s DIY scene who Sab grew up watching perform. The album gifts us with tracks like “Drunk” and “Bound,” which let the listener feel Sab’s desperation and frustration with herself, others, and the world. She credits 90s grunge rock groups like Hole as the vision for some of the tracks off of the album; you can especially hear the Courtney Love inspiration in “Drunk.”

From hugging her guitar to her chest and crooning gently to violently swinging the microphone around the stage, Sab’s performance is full of theatrics. Fans scream the title of their favorite tracks from the band’s discography in hopes that Sab will switch up the setlist, to which she playfully responds “I’m not a jukebox, people!”

However, in true rockstar fashion, Sab does not disappoint. As the show ends, the band exits the stage only to return a few moments later after a roar of applause and chants for an encore. The crowd gasps as the familiar intro of the band’s hit song “Dumb” begins to play. While searching for more background information on this song, I saw a comment from last.fm user Javascript8 that says “got attached to this song in the worst phase of my life” and “i hope things get better for me soon because i deserve it i’m a nice person,” and I think that captures the spirit of this track. It tells the story of someone who has lost or nearly lost all hope and hungers for some reassurance. As the song plays, Sab gets close to the mic and whispers “are you always gonna be hanging around?” She heckles the audience by refusing to continue playing unless they prove they’re going to go all out. The crowd erupts into a sea of screams and chaotic movement.

The couple next to me embrace each other and run full force into the eye of the mosh pit. A girl a few paces away from me spills her drink on an unsuspecting concert goer who proceeds to mosh despite just being drenched in a fruity girly cocktail. As the song comes to an end, Sab thanks the crowd and exits the stage once again. I’ve been trying to pick up the bass for a few weeks now, and seeing Sab dominate the stage has encouraged me to keep practicing. Overall, Pretty Sick put on a kick ass show, and I look forward to their return to Boston.