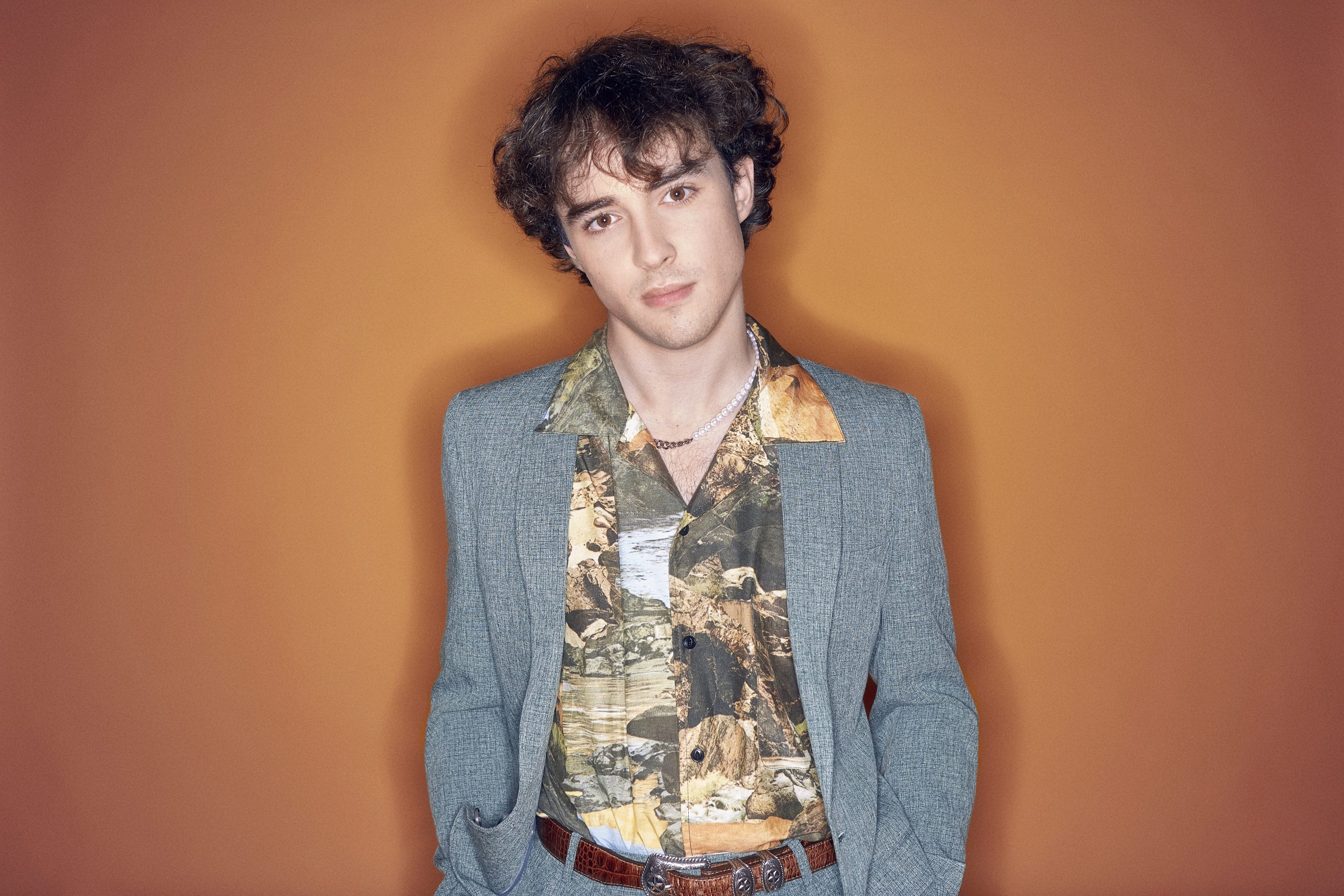 It’s 10 minutes until the doors open. Alfie Templeman jumps to shake my hand before quickly excusing himself and running to the bathroom before his last interview of the night. He pads away barefooted. Alfie quickly explains, he broke both his big toes while running around in flip-flops about a week prior and now avoids wearing shoes.

At just 19 years old, Templeman is already back for his second US tour alongside his friend, London-based artist Thomas Headon. The Bedfordshire, UK-based artist released his debut album earlier this year, receiving ⅘ star review from prominent UK music publication NME, and already has plans for his sophomore album. I sat down to talk with him at Brighton Music Hall in Brookline, MA, where he was performing for the second time.

He returns from the bathroom quickly, apologizing for the inconvenience before offering me a drink and finally sitting down, pulling at his patchwork denim trousers. The soundcheck downstairs forces the conversation to be raised an octave to be heard. Templeman explains that the tour is slightly different this time because his confidence and performance have improved. He also humbly adds, “I think we actually do have quite a few fans this time,” although he harbors self-doubt. When I point out the lengthy line outside the venue, he quickly disregards it saying, “Yeah, I know. That’s cool. It’s probably all for him [Headon], though. He’s all famous and s— out here [The US].”

Headon, who is currently getting dressed about four feet away, cuts in, “You self-doubt,” he says.

Templeman responds, “Yeah. I just found it so funny when, when we woke up, and there were those fans camping outside, and you were like, they’re probably here for you, Alfie. I was like, no, they f—— aren’t.”

“We don’t say that. We say that they’re here for us,” Headon reassures with a motherly composure while pulling on a pair of trousers.

With almost 2 million monthly Spotify listeners, Templeman has no shortage of fans. He started releasing music on the platform at 13 before being signed at just 15 years old by Chess Club records. Templeman grins, recalling when his label first reached out to him, “I was like, yeah, that’s cool, but I’m in school, I’ve got exams, so f— off.” Luckily he later changed his mind about their proposition.

Even though he was signed, Templeman continued to make music from his bedroom, including his debut album, and he plans to do that for his sophomore album as well. While snaking further up his chair, he discusses his bedroom’s role in his creative process. “The reason why I love recording in my bedroom so much is because my bedroom’s a boring place that I’m used to being in,” he says. “But I treat that as a good thing because when I write a good song, it’s like, oh wow, this must be a good song because all of a sudden, the room feels electric.”

Templeman also enjoys working in his room because he prefers working alone. While he sent a few songs from Mellow Moon out to producers and fellow artists, at least half of the album was entirely bedroom recorded. “I feel like people would make fun of me if they saw the way I do things,” says Templeman. “Maybe it’s cause I have ADHD or something. I work a bit backwards.”

Templeman’s manager, who has been glancing at his watch for the past few minutes, cuts in to remind Alfie that he still hasn’t done a sound check. They ask me if it’s alright to pause the interview, and Alfie invites me to watch the sound check. He hurries through the green room and down the stairs. Still barefoot, he hops onto the stage where the rest of his band has been practicing.

An open can of Arizona and a polaroid camera are balancing on the edge of the stage as they run through a quick two-minute sound check. After a few adjustments and about 30 seconds of “Wait…I Lied” and “Candy Floss,” Templeman darts off the stage. He tells me he should practice a bit longer, but it’ll probably be fine.

Back in the green room, he hits the fridge, chanting “PBR” while grabbing a can of Pabst Blue Ribbon Beer before sitting back down. As he lifts the can to his mouth, a bright green wristband with “Troubadour” on it becomes visible. He played the iconic location just a few days before, where many of his musical influences had also once performed.

Templeman defines his solo music style as “Indie R&B” with a strong pop sound. However, he cites rock legends like Led Zeppelin and Rush as some of his biggest influences. He gets sidetracked when I bring up Jimmy Page, eager to talk about Led Zeppelin. “I guess you’ll see tonight when I play guitar like you can tell that I like all that stuff,” he says. “I feel like with studio records; it’s quite hard to show your influences some of the time, especially the rockier influences, but when we play live, we sound more like a rock band than a pop band.”

He describes the influence as more of a technique-based impact. His songwriting is a different story. As he scratches at the scruff on his chin, he tries to define his creative process. “At least the favorite songs of mine are the ones that have been sent down from the heavens. It’s like I’ve had a dream, and the song’s written itself. It’s like there’s a ghostwriter that’s my own brain,” he says. “Anytime I could just be walking around and then all of a sudden I hear this melody, and it’s like the heavens above have sent me this blissful melody, and I have to recreate it. It’s like I can hear the whole song, like I can hear the drums, I can hear the guitars, and it’s just like, I’ve been given the duty to record it.”

Templeman writes and records most of the heaven-sent music through his notes and voice memos app. Although he has perfect pitch, he doesn’t actually know how to read music and relies on his notes to remember melodies and lyrics. “Whenever I’m in a kind of sh—y space, I’ll sit down and write, just go on my notes app and write what I’m feeling, and then later I’ll kind of convert that into lyrics,” says Templeman.

As he mentions, he uses songwriting as a form of therapy. More specifically, he uses his songs as a way of answering questions that he has, gathering answers through his search or responses from fans. He plans to follow this same process for his sophomore album as well.

After being asked what questions he’s considering, Templeman pulls out his phone and searches through his notes. His guitarist, Josh, fills the silence by apologizing to me for my Newcastle United shirt. Templeman perks backup, leaning in and showing me his phone screen. “I actually did this once, so I had a “questions you have” and make a concept album about all of the things you can’t make sense of,” he explains. “So like, aren’t all good friends made to hate each other? Am I made to feel like my mind is unvalued? Why do all things always go wrong before everything starts to look good again? So it’s just like weird things that I analyze, and then like, I’ll keep a note of it and then turn it into a song later.”

More of this can be expected on his next album. He says he plans to dive deeper than he did on Mellow Moon. “It’s about getting into the nooks and crannies of my brain, basically, and analyzing those parts where I’m maybe a little bit uncomfortable or having a hard time.” When this album can be expected has yet to be confirmed.

Templeman and Headon finished their North America tour on Monday, November 21st in Toronto, ON.