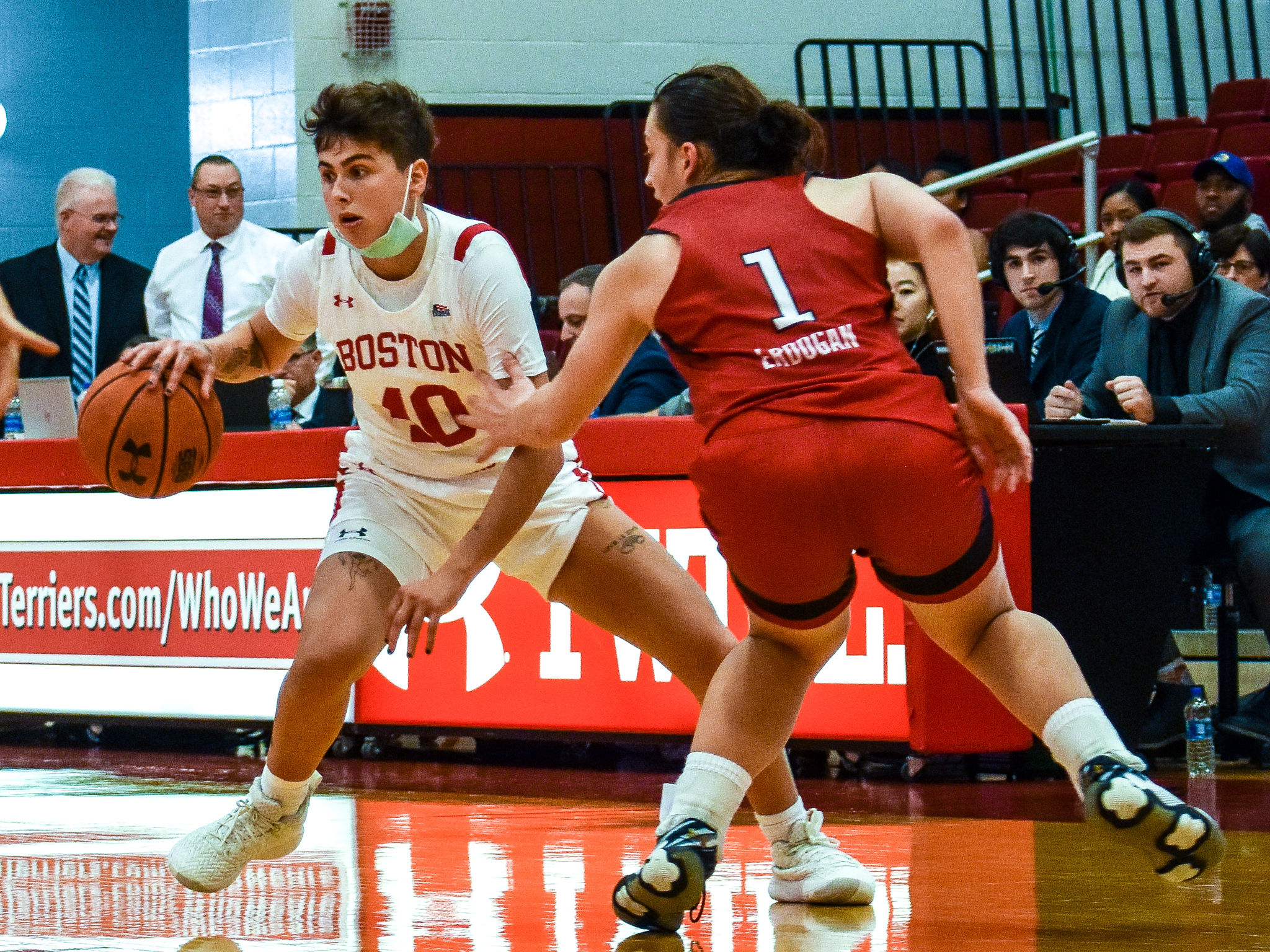 Boston University Women’s Basketball (2-2) dominated the Hartford Hawks (0-3) on Saturday at home, earning their second victory of the season by a score of 73-45.

The Terriers played their best, most efficient basketball of the season to put their record back to .500. BU Head Coach Melissa Graves said that the victory was a team effort, but acknowledged the outstanding performance of forward Caitlin Weimar, who finished with 15 points and 10 rebounds, good enough for her third double-double of the season.

“If (Weimar) can play that way every game, it’s gonna be really hard for us not to be successful,” Graves said.

The Terriers took an early lead, ending the first quarter with 18 points to Hartford’s 11. 12 of those points came from inside the paint, as BU’s offensive game plan prioritized entry passes, rim runs and feeding the ball to forwards Weimar, Maren Durant and Sam Crispe. This strategy proved fruitful, as they finished the game with 38 points in the paint, a stat that Graves commends her team for.

“I thought they did a really good job of being strong inside,” Graves said. “They had some rim runs, they were running hard in transition to get the ball.”

The Terriers’ stellar offense did not stop in the second quarter, as they finished with 21 points in the period. Despite their offensive dominance in the second quarter, their defense did not match. They gave up several crucial shots to Hartford late in the period, two of which were uncontested 3-pointers. The Hawks went 2-for-5 from beyond the arc to keep the game relatively close at the half, 29 points to the Terriers’ 39.

“I thought the second quarter effort could have been better defensively,” Graves said. “We scored the most points that quarter, but we also gave up the most points. So can we be consistent on both ends?”

The Terriers answered her question with an auspicious third quarter. They went 8-for-16 from the field and 2-for-5 from behind the arc to score 18 points, 14 of which went unanswered. But the Terriers shined just as bright defensively, holding Hartford to just seven points and allowing them only three of their 15 attempted field goals in the third quarter.

“The third quarter was great because we came out with energy to defend,” Graves said. “We have a lot of weapons to score the basketball, we can score at every position, but can we defend? I thought we did that in the second half, especially coming out of halftime with the energy that we had to start the third quarter that way.”

“Our goal was to win all four quarters this game,” Graves said, “And we obviously did that.”

One key element to BU’s win was their stellar ball movement. The Terriers won the assist battle with 25, the most they have dished out in one game since 2014.

“I feel like the last couple of games we haven’t had that,” Graves said. “25 assists on 30 baskets is just phenomenal.”

In that same vein, the Terriers were a lot smarter with the ball than in previous games, limiting their turnovers to 14 total.

“Our spacing the last couple of games was not great either, which contributed to a lot of our turnovers,” Graves said. “We’ve been in the 20s lately, so to have it at 14 is really great.”

The Terriers look to extend their win streak against St. Francis Brooklyn at home on Wednesday, hoping to secure a winning record for the first time this season.