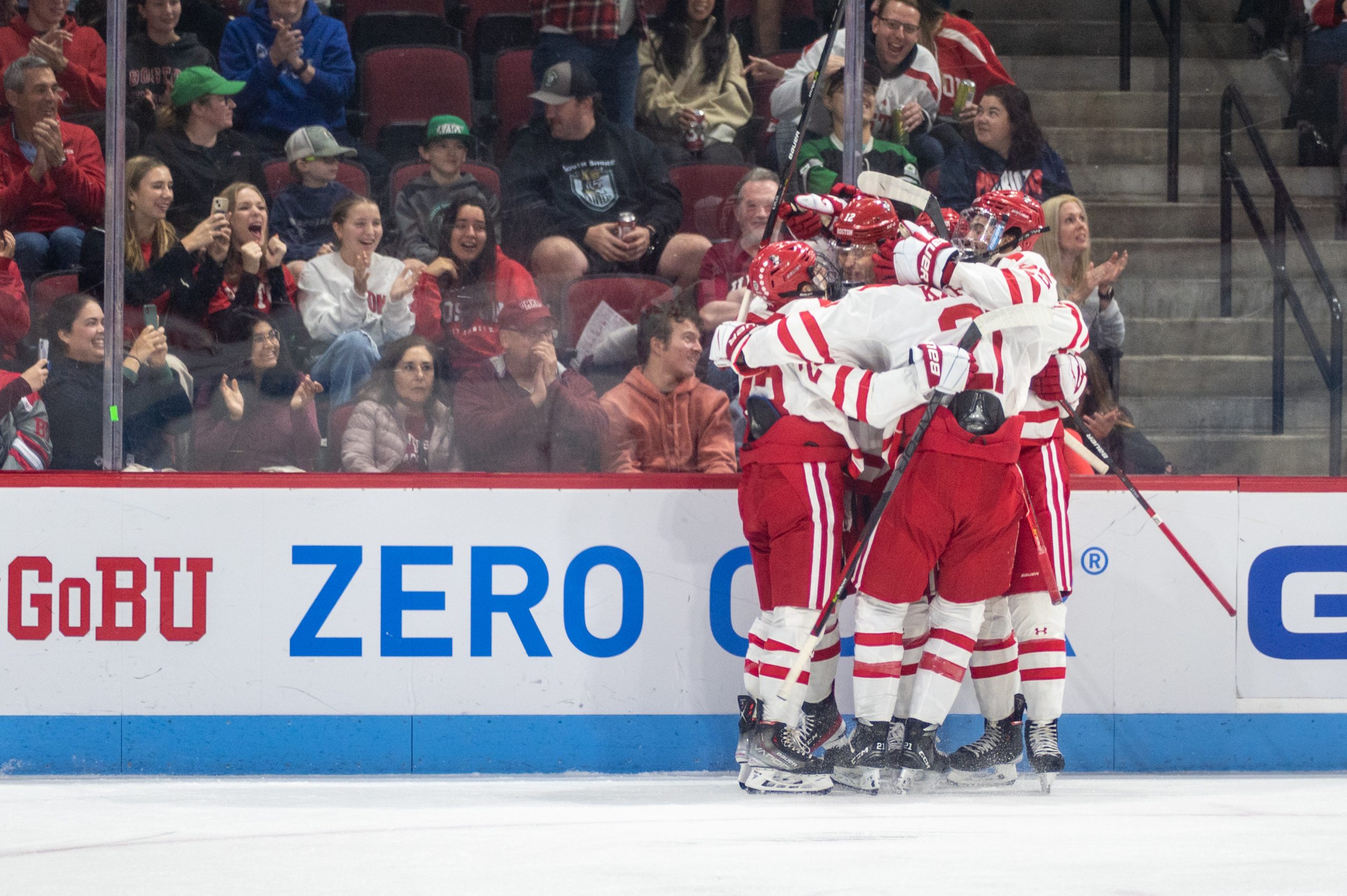 “Really good response by our guys,” BU Head Coach Jay Pandolfo said. “I thought the effort from the start tonight was so much better than last night. We were a lot more competitive, a lot harder on the puck.”

Northeastern picked up three of a possible four points this weekend against the Terriers.

“Two good teams going toe-to-toe, and I think we showed we play a certain way, the right way, you have a chance to beat anybody,” Northeastern Head Coach Jerry Keefe said.

“We just tried to make sure we’re trying to get more shots through the net,” Pandolfo said. “They do a good job blocking shots. You gotta give them credit. … It seemed like we were getting more to the net for sure.”

BU got on the board first thanks to a goal from captain Domenick Fensore. After entering the zone, junior forward Dylan Peterson stopped up and found a charging Fensore. Fensore beat Levi five-hole to give BU the lead and their first goal on Levi of the weekend.

BU had to kill off two penalties in the opening frame, generating a few short-handed scoring chances. Both teams had a shot off the post as well.

Northeastern tied the game less than five minutes into the middle frame. BU had a 4-on-2 opportunity entering NU’s zone, but Hutson’s backhand pass went too far and gave the puck back to NU. Northeastern captain Aidan McDonough retrieved the puck and passed it to sophomore Justin Hryckowian as he entered the BU zone. Hryckowian found junior forward Gunnarwolfe Fontaine flying down the left side, and Fontaine shot it past the blocker of Commesso for his fifth of the season.

McDonough gave Northeastern their first lead of the game on the power play. Gallagher went to the penalty box for cross-checking, and NU went to work immediately. Commessso had to make a diving save just seconds into the power play. Senior defenseman Jeremie Bucheler let go of another shot, and the puck went into the corner. Hryckowian, from the near boards, sent a cross-crease pass that McDonough one-timed home for his eighth of the season.

BU tied the game with just over two minutes left in the period. Freshman forward Jeremy Wilmer skated through all three zones from the far end of the ice to the near side before dropping the puck off to senior forward Matt Brown. Brown let go a wrist shot that fluttered by the shoulder of Levi, off the post and in.

Northeastern got the lead back a little less than six minutes into the third. Following a face-off win, freshman defenseman Jackson Dorrington got the puck to his defense partner, freshman defenseman Hunter McDonald. McDonald let a shot go from beyond the left circle, and junior forward Sam Colangelo tipped it home for his third goal of the season.

BU was the next to respond in the chess match, tying the game at three. Fensore skated the puck from behind the Terriers’ net into the Huskies’ zone. Fensore then passed the puck off to freshman forward Ryan Greene, who beat Levi on the blocker side for his sixth of the year.

After neither team could break the deadlock in regulation, the two teams headed to overtime. Both Commesso and Levi made spectacular saves during the 3-on-3 session, and Hutson was once again the OT hero for BU. Following another brilliant save from Commesso, senior forward Jay O’Brien started a 3-on-1 the other way. After O’Brien went across the blue line, he fed the puck to Hutson, who beat Levi on the backhand to give BU the 4-3 overtime victory.

“He’s a talented player,” Pandolfo said. “With all that ice out there, when he gets the puck, some good things are gonna happen.”

BU will head back to Agganis Arena for a Wednesday showdown against Notre Dame.

“We’ll rest tomorrow, have good practice Monday and Tuesday, and be ready for Wednesday,” Pandolfo said. “So just a little shorter week than we’re used to, but I think it’d be good for our guys coming off this win and hopefully we’re ready to go.”

Puck drop is scheduled for 5 p.m. on Wednesday, and BU will be hosting a Food Drive Night.