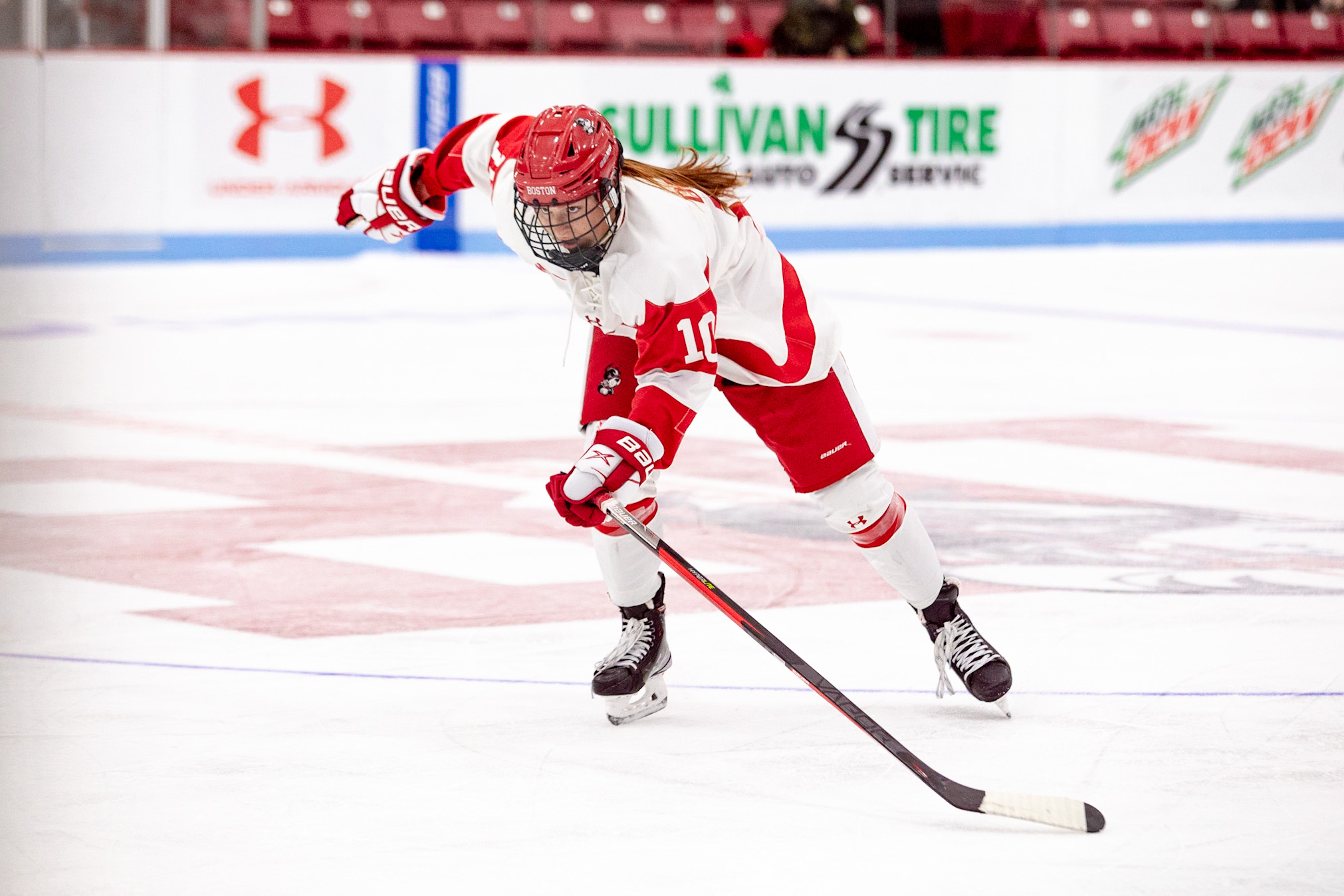 “You’ve got to give credit to Andrea Brändli for a real solid effort. She was our backbone and in the high 30s for saves,” Durocher said following the 2-1 win.

UConn established offensive dominance early in the game and drew a penalty 2:58 into the period. BU’s junior defender Julia Shaunessy was called for holding during a UConn breakaway attempt. The Terriers were able to fend off the Husky penalty thanks to an impressive save by Brändli.

The first goal of this matchup was scored by UConn’s point leader, junior forward Jada Habisch. Habisch worked her way around BU’s defenders and shot the puck into the top corner of the goal at 10:42. The goal was Habisch’s seventh of the season.

BU was able to retain momentum after Habisch’s goal, and at 14:26, Terrier sophomore forward Christina Vote scored the equalizer from out in front to tie the score at 1-1.

When the first period of the game came to a close, UConn had outshot BU 16-3, but the score was tied 1-1.

As the second 20 minutes of play got underway, the Huskies once again controlled the puck, getting eight consecutive shots on goal before BU was able to regain control.

On their sixth shot of the night, BU was able to take the 2-1 lead. Freshman defender Brooke Disher took a shot from out at the blue line that managed to find its way through traffic and into the back of the UConn net. This goal at 7:17 into the second marked Disher’s first collegiate goal.

Durocher has been pleased with how many of his players have been stepping up and producing offensively this season.

“Five or six kids already this year have scored a first goal and that’s nice… It’s nice to have others pick up the offensive side of it and continue to build our depth and offensive confidence,” Durocher said.

Disher made waves once more at 10:39 as she was called for a tripping penalty to give UConn their second power play of the night. The Terriers were able to kill off the penalty and keep their 2-1 lead.

While there were no goals scored in the second half of the period, BU was able to control the momentum and sustain offensive zone possession much better than they did in the first.

At the end of the second, shots on goal were 25-11 in favor of the Huskies, but within the period, the shots were nearly equal at 9-8 UConn.

Shortly into the last 20 minutes, BU gave UConn its third and final power play opportunity. Junior forward Ani Fitzgerald sat in the box for cross-checking, but the Huskies were unable to capitalize on the opportunity and the score remained 2-1.

At 13:55, BU was given its first and only power play when UConn senior defender Ainsley Svetek was called for interference. BU was unable to secure an insurance goal during those two minutes but took some valuable time off the clock.

In the final 90 seconds of the game, UConn Head Coach Chris MacKenzie pulled Chan from net for an extra attacker, but the BU defense fended off the Huskies one last time and secured a 2-1 victory.

“At the end when the goalie got pulled we were playing aggressive, and we weren’t playing not to lose, we were really playing to win,” Durocher said.

The final shots on goal tally was 39-18 in favor of UConn.

“We have to continue to make good execution on the more elementary plays… we’ve got to get a little more quickness and puck possession involved too,” Durocher said in response to the shots on goal differential in tonight’s matchup.

The two teams will face off once again tomorrow, Nov. 19, at 3 pm in Walter Brown Arena.