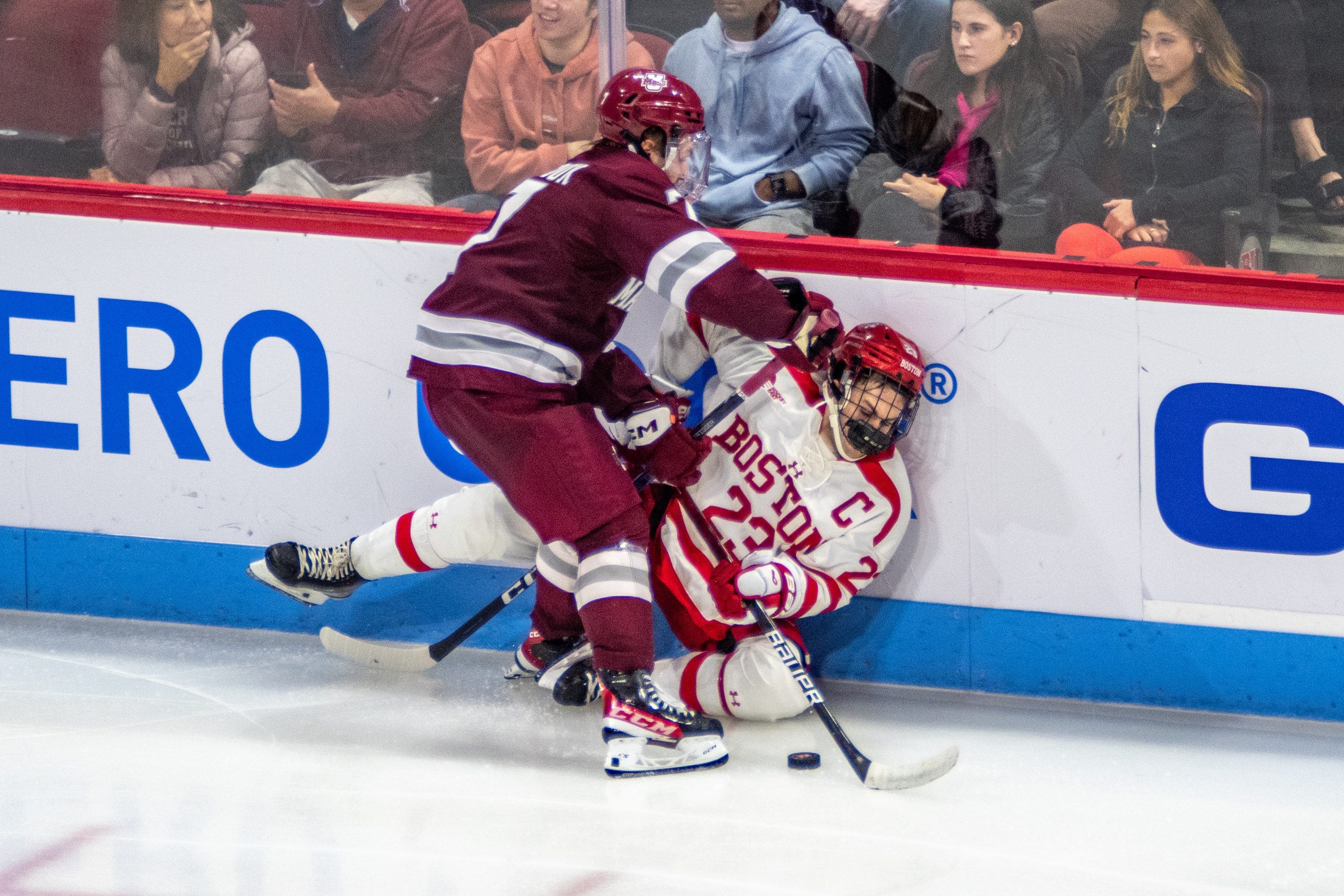 The first period was evenly matched, as the two teams settled into the game. Freshman defenseman Lane Hutson recorded the game’s first shot on net at the 2:43 mark, but Northeastern junior goaltender Devon Levi soaked it up. At the other end of the ice, BU junior goaltender Drew Commesso stood strong for the Terriers as freshman defender Vinny Borgesi recorded the Huskies’ first shot.

Borgesi was playing in his third consecutive game on the first defensive pair, but tonight he was missing defensive partner, senior Jayden Struble. Struble was forced to sit out of Friday’s contest as a result of his fighting major received in NU’s previous game. Freshman defender Hunter McDonald slotted in for Struble, and he found success all night.

“We were playing four and five defensemen a lot of the night, and three of those guys are freshmen,” Northeastern Head Coach Jerry Keefe said. “Our bench was really good tonight, and they fed off blocked shots.”

Throughout the entire game, the Huskies sacrificed their bodies to prevent BU’s shots from even reaching Levi. They led in blocked shots 24-13. The freshman trio of NU defenders accounted for 14 of those 24 blocked shots – McDonald with eight himself.

BU senior forward Ethan Phillips made a highlight-reel save with 11 minutes remaining in the first. Following a NU takeaway, freshman forward Cam Lund snuck the puck through Commesso’s pads on an odd-man rush. The red light went on, but Phillips’ diving save redirected the puck advancing towards the goal line.

In this flurry of confusion, junior forward Nick Zabaneh scooped up the puck and took it to NU’s zone. After some BU pressure, they were awarded their first power play of the night as Lund was sent to the box for a slashing minor. The Terriers were unable to convert on the man advantage, but they continued to test Levi.

Following a scoreless middle frame, Lund redeemed himself in the third as he scored the game-winner. He was named Hockey East Pro Ambitions Rookie of the Week last week, and he came up strong for the Huskies once again. After playing defense at the other end of the ice amid a spurt of BU shots, Lund danced through three Terriers and fired a shot past Commeso’s right shoulder, off the post and in.

This would be the only goal conceded by Commesso all night en route to his 24-save performance.

After BU pulled Commesso late in the third to push for the tying goal, the Huskies converted on the empty-netter with 44 seconds remaining to make it 2-0.

The Terriers kept the pressure on until the final buzzer, but the puck never found the back of the net. They led in shots on goal 41-26. Levi’s 41 saves gave the Huskies the win, and Levi his third shutout of the season.

“A few times we didn’t manage the puck well when we were tired, and then we couldn’t get off, so they extended some O-zone on us,” Keefe said. “[Levi’s] obviously a good goaltender, so he’s going to stop it most of the time.”

In addition to Struble, the Huskies were missing their main offensive powerhouse and captain, forward Aidan McDonough. The senior forward leads Hockey East in points and was also suspended from tonight’s game. Both Struble and McDonough will draw back into the lineup for Saturday’s rematch.

“I think we’ve got to worry about ourselves,” Pandolfo said. “[We have to] find a way to compete from the drop of the puck more than worry about what they’re doing.”

The Terriers and Huskies will face off again Saturday night at Matthews Arena, with puck drop set for 7 p.m.