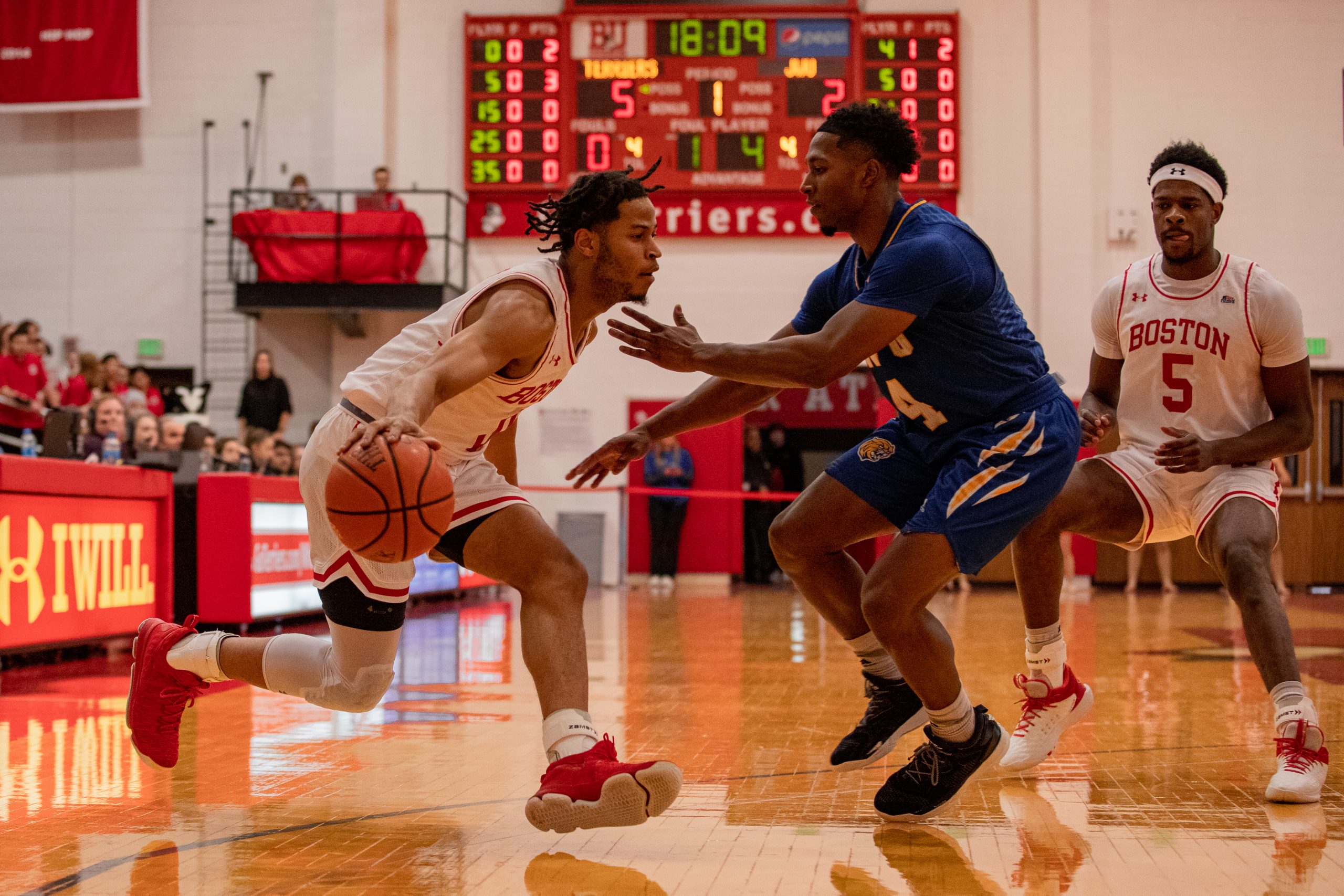 The Terriers and Hawks exchanged blows early, but ultimately the Terriers’ depth led to them running away with an easy victory against the independent Division I team.

“We shot the ball well and made 14 threes, anytime you make 14 threes that’s gonna give you a chance to win,” BU Head Coach Joe Jones said.

Jones was not totally satisfied with his team’s effort though.

“I think if we want to be the team that we want to become we are going to have to be better than this defensively,” Jones said.

Both teams started the game quickly, with each side demonstrating their ability to shoot the three ball. Michael Dunne (14 points) and Kurtis Henderson’s (11 points, 1 assist) threes gave Hartford an early 7-4 lead before senior guard Ethan Brittain-Watts (10 points, 2 assists) responded with a pair of threes himself to give the Terriers a 12-9 lead with 14:46 left in the first half.

“He [Brittain-Watts] is a good offensive player and he’s definitely capable of scoring the ball,” Jones said. “We need him to be able to lead us as a point guard when things aren’t going well.”

The Terriers used the three ball to their advantage against the Hawks, and their ability to shoot from beyond the arc sparked their run to end the first half.

“We’re a good shooting team and we have a lot of guys that can make threes,” Jones said, “Two of our best 3-point shooters are Walt [Whyte] and Daman [Tate], and they made one between the two of them, we made 14. That’s how good of a shooting team we are.”

BU out-offensive rebounded Hartford 16-5 thanks to the likes of forwards Nevin Zink (6 rebounds) and Malcolm Chimezie (3 rebounds), but Jones still thinks the offensive production out of the forward pair has room for improvement.

“I think we have to do a better job developing those guys [Zink and Chimezie] as scorers,” Jones said. “When we start playing through the schedule we are going to need to develop our post-game more than what it is right now.”

BU started the second half quickly, with graduate guard Jonas Harper (18 points, 1 assist) scoring with a layup followed by a three to make it 62-34 BU 1:46 seconds into the second half.

“He [Harper] played so well in our preseason and plays so well in practice, it’s not surprising tonight that he played as well as he did because he’s been doing it a lot, it was just a matter of time before he got going.”

Junior forward Anthony Morales led all scorers on Thursday with 19, his career-high.

“Ant [Morales] is a really talented kid, he is a big part of what we do because he can change the game in so many different ways,” Jones said.

Morales was one of three Terriers in double-digits, and one of 14 who scored against Hartford on Thursday, demonstrating the depth of the Terriers.

“I think if we’re going to have great success it’s gonna be because we can play nine to 10 guys,” Jones said.

With a healthy lead, freshmen Otto Landrum (4 points), Ben Roy (4 points), and Nic Nobili (2 points) all got game time in the second half.

The Terriers will look to continue their strong start to the season when they travel to the University of New Hampshire on Saturday, Nov. 20 to play the Wildcats at 1 p.m.