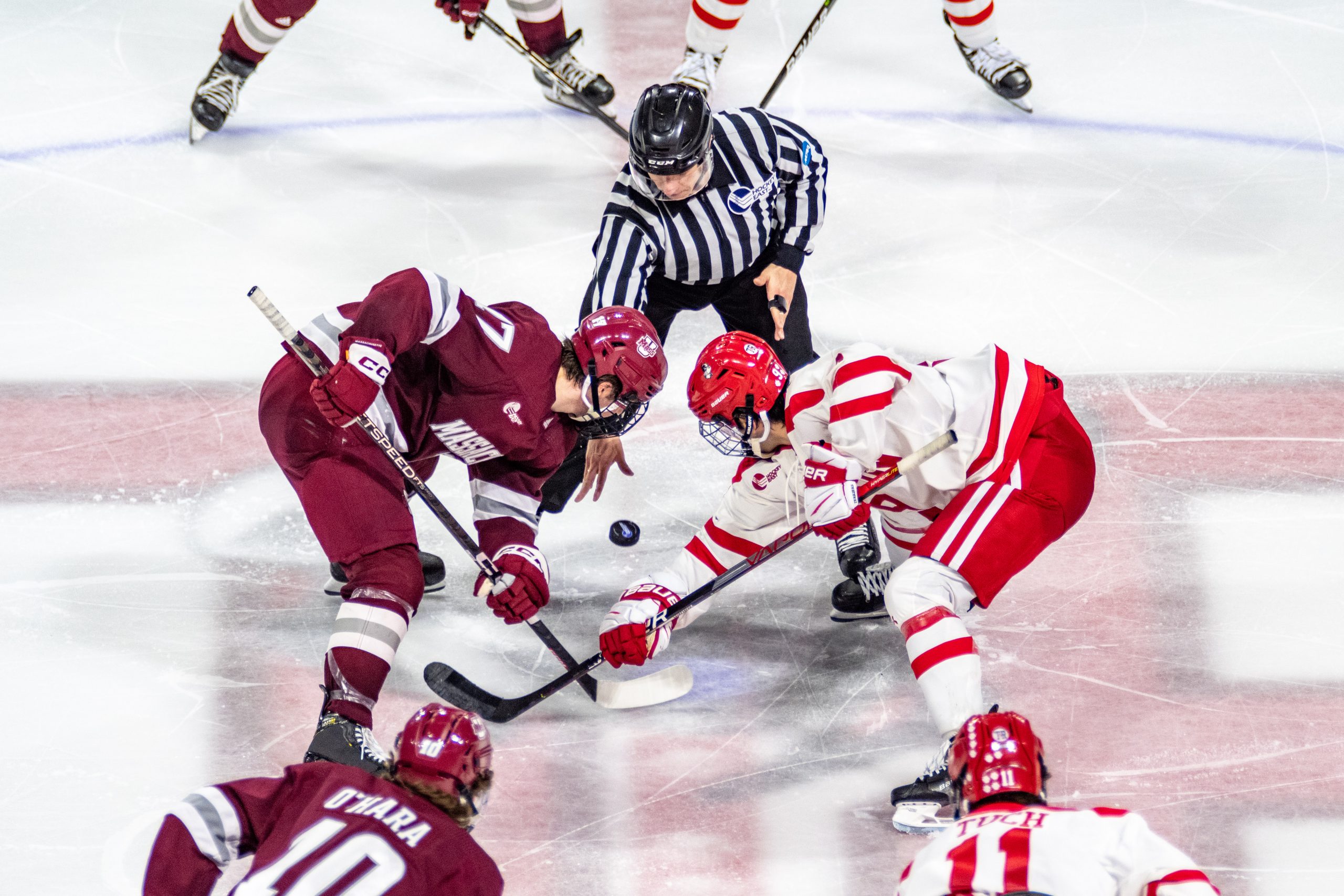 Following two weeks without competition, the Terriers had an extremely successful weekend against the University of Massachusetts. BU heavily outshot UMass with a season-high 45 shots in both outings. Their offense shined as they scored 12 goals over the two-game series.

The freshmen accounted for half of the goals, but most notably, freshman forward Ryan Greene stole the show. Greene had a five-point effort (2g, 3a) in the Nov. 11 game, and was on the ice for six of BU’s seven goals. Opening the scoring both nights, he tallied another goal in the second game. For his performance, Greene was named Hockey East Player of the Week for the week of Nov. 7.

“[Greene’s] playing in all situations now. He’s killing penalties, he’s on the power play. He’s playing more, and he’s earned it,” BU Head Coach Jay Pandolfo said following BU’s 5-1 win on Nov. 12. “He’s very calm out there, he makes smart decisions with the puck, and he’s been really good for us.”

Junior goaltender Drew Commesso started both games and notched a 50-save weekend, recording a .943 save percentage across the two games. The two goals he conceded Friday both came with BU on the penalty kill.

BU is riding a three-game win streak, with Commesso in net for each of those games. Commesso will have to continue to stand strong this weekend against an explosive NU offense.

Finding consistency has been a challenge for the Terriers all season long. Coming into the UMass series, they had split every weekend’s pair of games—losing the first game and winning the second. Last weekend, they were finally able to carry their momentum throughout the entire series.

“I was happy for our guys,” Pandolfo said in his mid-week press conference. “I think they really did put really good work in those two weeks leading up to the UMass series, so it’s a credit to them being ready.”

“We have a lot of depth, and we want to use that depth. When guys are sitting on the bench and are not getting out there because we have to kill too many penalties, I think it hurts the flow of our game,” Pandolfo said. “I think it’s important that our discipline is better, and it has been.”

The Huskies are coming off a two-game Boston College series where they were held without a regulation win. In their first matchup, NU scored three goals in the third period to come back from down 4-1. The Terriers will have to keep the pressure on their opponents for the full 60 minutes if they want to capitalize.

A cornerstone of NU’s roster is junior goaltender Devon Levi. Through 11 games, the sophomore ranks fourth in the nation with a .941 save percentage.

“[Levi’s] a terrific goalie,” Pandolfo said. “The big thing going against him is you have to create second chances. He doesn’t give up too many goals on the first shot. We have to make sure we’re getting to the net, we’re finding rebounds, we’re recovering pucks.”

The last time the Terriers and Huskies met was in the 2022 Beanpot Championship game, with BU shutting out the three-time reigning champions in a 1-0 contest. This weekend, BU will be looking for their first home win against Northeastern since 2019. Of note, neither Commesso nor Levi played for their respective teams during the Beanpot Championship, as both were overseas for the 2022 Olympic Games.

The first game will take place at Agganis Arena on Friday, and the second will follow Saturday at Northeastern’s Matthews Arena. Both games have puck drops scheduled for 7 p.m.