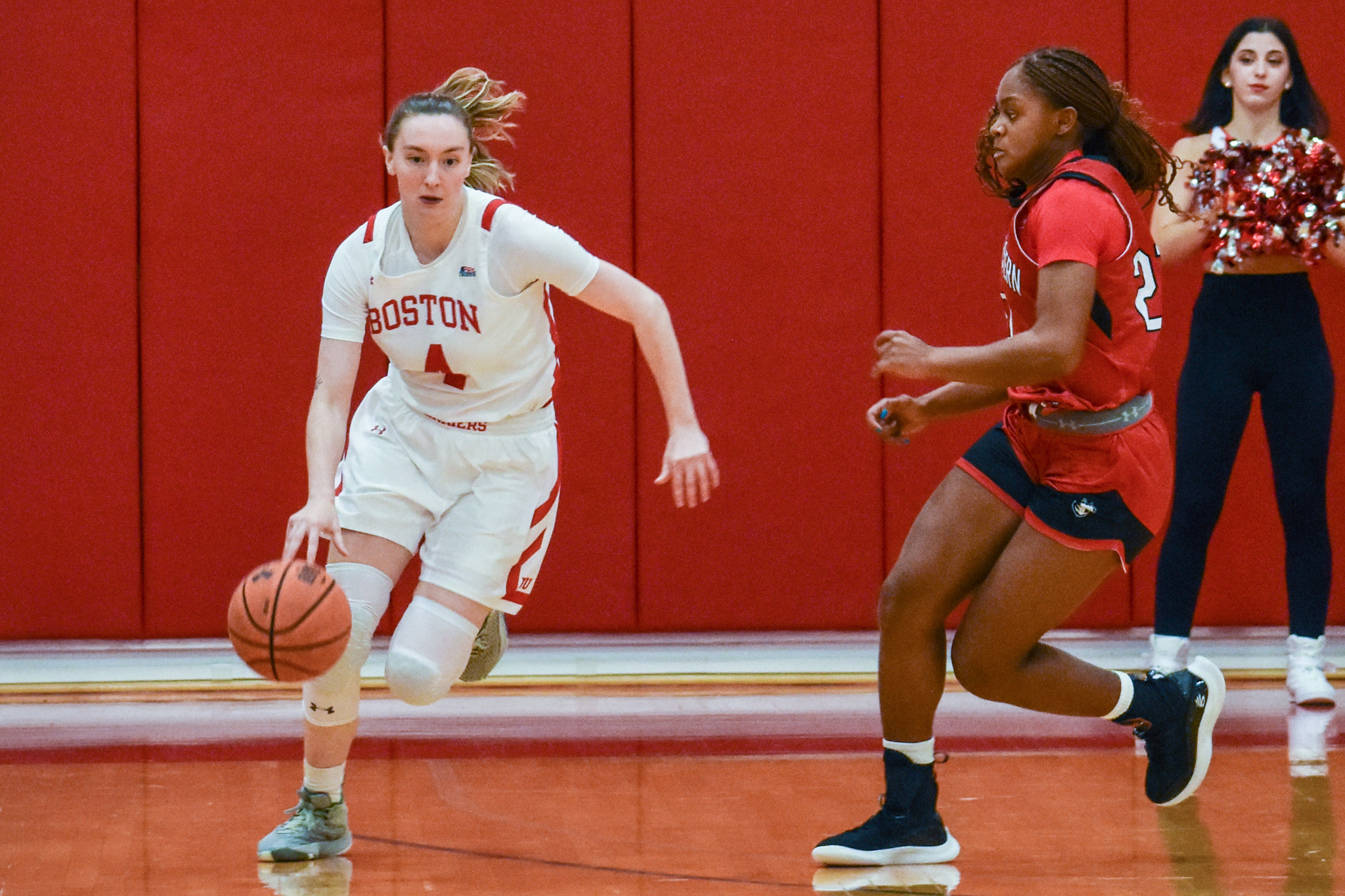 Boston University Women’s Basketball (1-2) came home with their first win of the season against the UMass Lowell River Hawks (0-3), winning 63-43 in Lowell.

The Terriers went back and forth with the River Hawks in the first four minutes of the game. Eager to capitalize on second chances, forward Caitlin Weimar and guard Lauren Davenport fought for rebounds in the paint, allowing the team to end the quarter with 11 rebounds, seven of which were defensive.

Offensively, the Terriers were having a much harder time in the opening quarter as they went 0-for-3 on 3-pointers, which allowed the River Hawks to maintain the lead throughout the first frame. Although BU also had their highest number of turnovers in the quarter (9), the team was still able to keep the deficit low as they finished the first quarter down 10-9.

“We could’ve came out with a better start,” BU Head Coach Melissa Graves said. “However, we came with a little more energy and were able to sustain that better than in previous games.”

The Terriers didn’t waste much time making up for the slow start, as they regained composure and scored the first four points of the second quarter. That lead only extended further as forward Sam Crispe and guard Liz Shean made both their free throws to put the Terriers on top 17-12 with six minutes left in the first half.

“To have three starters not playing (Maren Durant, Alex Giannaros, Annabelle Larnard), and the rest of the team still step up was really great,” Graves said.

The Terriers came out of halftime with even more fire, scoring back-to-back 3-pointers within the first two minutes. Weimar, scoring nine points in the third quarter, made it even harder for the River Hawks to come back after rallying three layups in less than a minute, allowing the score to grow to 36-24 in the first three minutes of the quarter.

BU seemingly got a groove for shots outside the 3-point line as they went 3-for-4, improving from going 0-for-5 in the first half. Not only did the Terriers dominate offensively, the team also shut down any second chances for the Lowell offense with 11 defensive rebounds in the quarter.

“The second half is where we really came alive,” Graves said. “[I] talked to [the team] about slowing down, taking a breath and executing our offense. Switching up our ball-screen coverage in the second half helped as well.”

The Terriers outscored the River Hawks 22-8 in the quarter, which notably put the team on the road to victory, and allowed for the largest lead of the quarter at 46-30.

Continuing their hot streak, BU started out the fourth quarter with four points from guard Sydney Johnson, all in less than 40 seconds. However, the Terrier defense let their excitement to close out the game cost them six personal fouls in the quarter, resulting in seven points for Lowell off of free throws.

Nevertheless, BU was able to end the quarter with a sigh of relief as Weimar, Johnson and guard Maggie Pina collectively scored seven points in the last two minutes of the game.

“We talked about ball pressure, about limiting gaps, and they did a much better job defensively today,” Graves said. “To come out and get this win will really spark some momentum going into the weekend.”

The Terriers look to even out their record this Saturday as they take on the Hartford Hawks at home at 2 p.m.