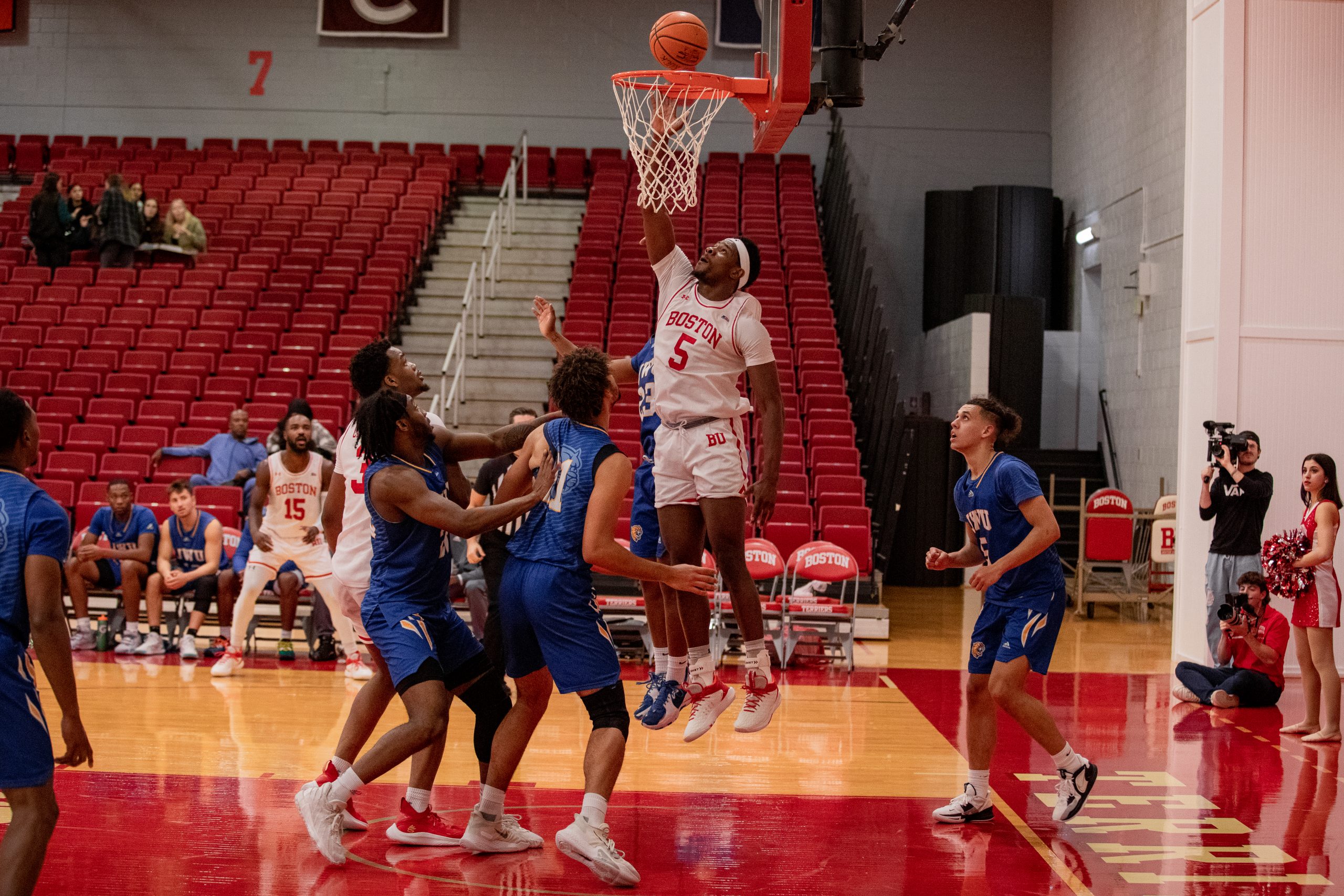 Boston University Men’s Basketball (2-1) defeated the Johnson & Wales Wildcats (0-1) 96-51 on Monday night at Case Gymnasium. The Terriers, coming off a blowout loss to the Connecticut Huskies, got the bounce back they were looking for in a dominant win over their Division III opponent.

BU got out to an early 11-point lead going into the first media timeout, with star guard Walter Whyte scoring eight of the team’s first 15 points, hitting his first three shots including two from behind the arc.

After the hot start, the Wildcats cut the lead to 28-23 with just under five minutes to play in the first half. “I thought we got off to a slow start,” Terriers Head Coach Joe Jones said.

The Terriers responded with a 16-0 run to end the half. Jones was pleased with his team’s ability to pick it up, giving a lot of credit to fifth-year guard Jonas Harper.

“I thought Jonas in particular really picked it up for us and gave us some energy,” Jones said.

BU got a lot of open looks from three in the first half. They made their first 3-point attempts, but only made four out of the last 15 in the first 20 minutes of play.

“I thought Miles did a good job of putting the ball on the floor and finding guys,” Jones said. He added that his team needs to do a better job of finishing once they get the ball.

The Terriers started the second half like they ended the first, opening up the half with a 15-0 run to stretch the lead to 37 points with over 15 minutes to play in regulation.

Ethan Brittain-Watts, getting his second consecutive start after coming off the bench in the season-opener, had a solid all-around game, finishing with 11 points, five rebounds, six assists and two steals.

“I thought [Brittain-Watts] quietly had an outstanding game,” Jones said.

Since the home team led big early, it allowed for the Terriers’ young players to get some valuable minutes early in the game. Freshman forward Otto Landrum had a team-high 12 points in the win. Along with Landrum, fellow freshmen Nic Nobili and Ben Roy all got quality minutes.

“I think it’s vital,” Jones said about getting the young players minutes early in the year. “On a different team, these guys might play a little bit, and in different years I had, [Landrum’s] one of them.”

Following his team’s loss to the Huskies last Friday, Jones was critical of his team’s effort, attitude and ability to handle adversity. Monday, on the other hand, was different.

Another key player for the Terriers was junior guard Anthony Morales, who scored 11 points on 4-for-6 shooting and 3-for-4 from three.

“He overthinks things, but he’s a very talented kid,” Jones said about Morales. “He’s got to learn to play with energy all the time.”

The Terriers will look to build off this performance next on Thursday at home against the Hartford Hawks (1-2) in Case Gymnasium.