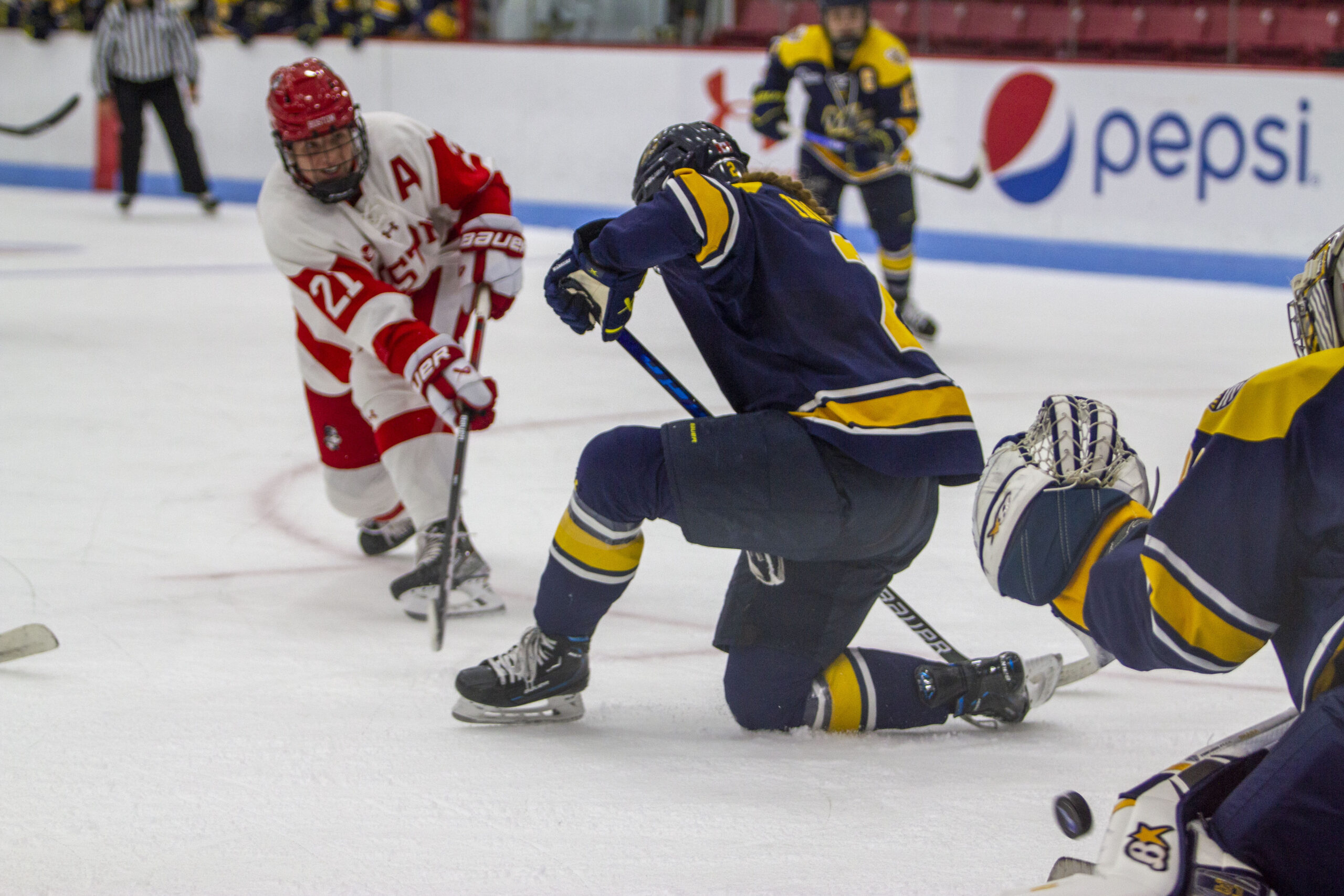 Returning to Gutterson Fieldhouse for their second game in as many days, Boston University Women’s Hockey (4-8-0, 3-7-0 HE) valiantly overcame a late-game deficit and got an overtime goal from junior forward Lacey Martin to beat the No. 13 Vermont Catamounts (8-5-1, 6-3-1 HE) by a final score of 4-3 on Saturday afternoon.

After the exciting finish, the Terriers have beaten the Catamounts in seven of their last 10 meetings, boasting an 8-3-2 record in their past 11 games against Vermont.

“The pace we played with today was totally different than last night’s performance,” BU Head Coach Brian Durocher said. “I give the kids a lot of credit because sometimes on the second day you don’t have as much jump as the game before. But, from the first face-off, there seemed to be great energy from all the players today”.

The Terriers got off to a slow start when the reigning Hockey East Player of the Year, graduate forward Theresa Schafzahl, scored her league-leading 11th goal of the season, giving the Catamounts an early lead.

After graduate goaltender Andrea Brändli made 31 saves for the Terriers on Friday, sophomore goaltender Callie Shanahan played a crucial role in Saturday’s victory over the Catamounts.

Throughout the afternoon, Shanahan made 25 crucial saves, specifically helping keep it a one-goal deficit early in the game. Her best save came against junior forward Natali Mlynkova in the first period. Mlynkova led a promising rush, weaving her way past the Terrier defense when she toe-dragged the puck and ripped a seemingly perfect shot, which Shanahan made a blocker save on.

“Callie was real solid in the net today,” Durocher said. “We gave her last weekend’s games off to work with our goalie coach this week, and I think we made the right decision seeing how she played today. She looked much calmer in the net and I’m really happy about her performance this afternoon”.

With Shanahan’s support in the crease, the Terriers fought back, scoring two goals in the final three-and-a-half minutes of the first period. Julia Nearis continued her strong play when she converted on the power play for her fifth goal of the season and her 10th point of the year. Nearis faked a cross-ice pass and capitalized from a tough angle with 3:32 left to play in the first period.

Shortly thereafter, Martin scored another power play goal with 1:31 left in the period. Martin roofed the puck into the top corner, scoring her second goal of the season, giving her eight career goals in 53 total games. Martin was very effective all afternoon, contributing to three of the four Terrier goals this afternoon.

After BU was unable to convert on a 5-on-3 power play opportunity, graduate defender Ellice Murphy of the Catamounts was able to even the score at two, scoring her fourth goal of the season.

Despite being tied in the last half of the second period, the Terriers nearly trailed when Alex Allan took a penalty with a minute and a half remaining in the second period. Catamount forward Ellice Murphy came extremely close to scoring her second goal of the game in the dying seconds of the period when Shanahan made a 10-bell save to keep the game tied at the buzzer.

In the final 20 minutes of game action, senior forward Lily Humphrey gave the Catamounts the lead with less than six minutes remaining after she scored her third goal of the season.

BU responded when junior defender Madison Cardaci, cutting to the net on a 2-on-1, beat Catamount junior goaltender Jessie McPherson to the blocker side, tying the game at three goals apiece.

The two teams were forced to continue their battle into overtime. In the extra frame, it took the Terriers only 19 seconds to come away with the victory when Martin converted on a breakaway opportunity for her second goal of the afternoon. Despite the late third-period deficit, the Terriers rallied and won a pivotal game against the No. 13 team in the country.

The Terriers will now head to Storrs, Connecticut to face off against the No. 14 Connecticut Huskies next weekend. The first game of their back-to-back at Mark Edward Freitas Ice Forum is scheduled for 6 p.m. on Friday, Nov. 18.