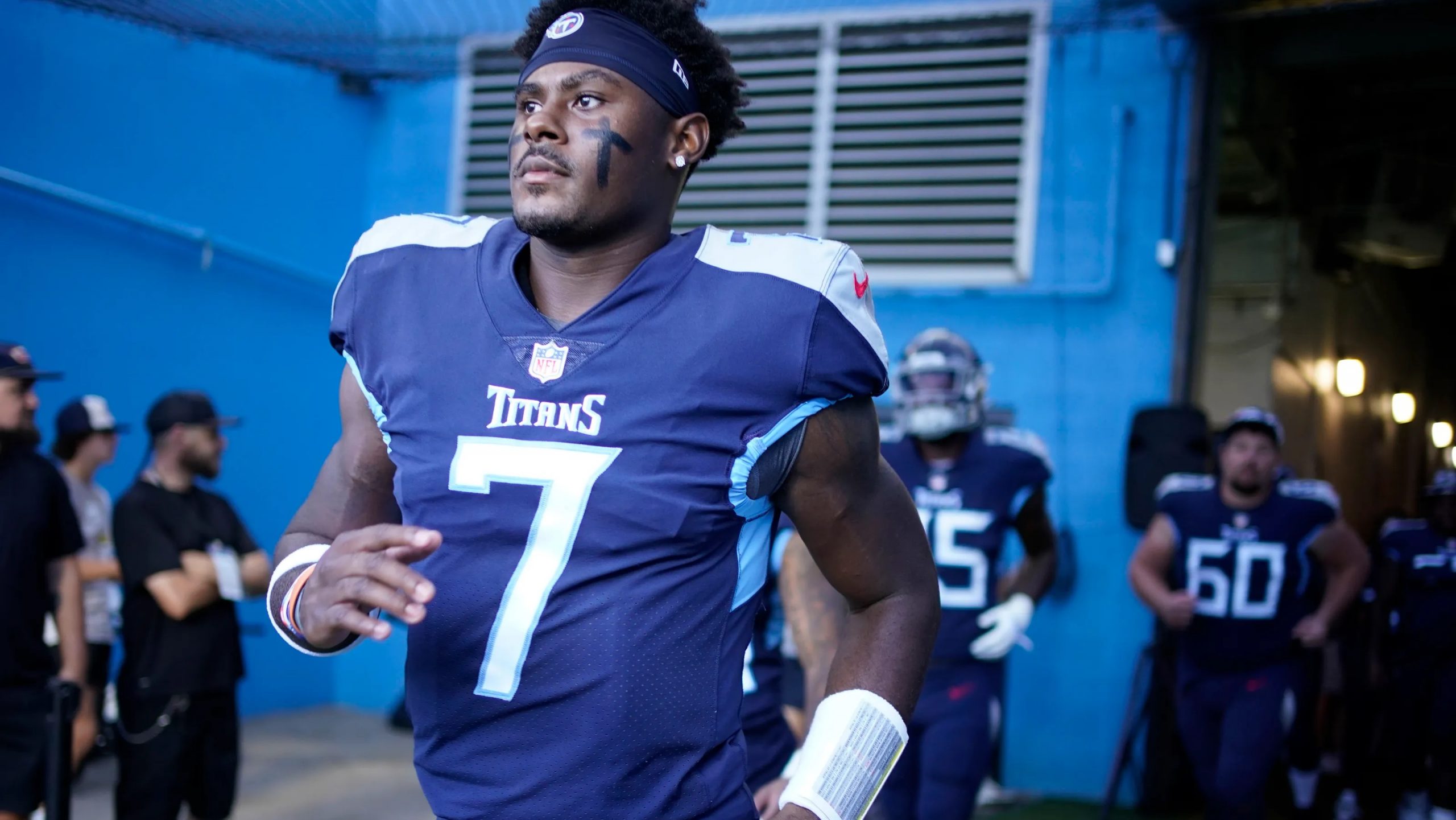 There’s a cliché in the NFL that is almost as old as the sport itself. A true football thing: There are no moral victories in football.

Well, in reality, there are.

The Tennessee Titans’ overtime loss to the Kansas City Chiefs on Sunday Night Football in Week 9 was brimming with bright spots , despite their head coach’s insistence in reiterating that cliché.

“There’s no moral victories,” Mike Vrabel said in his postgame press conference on Sunday night. “We’ve came over here to win. That’s all we were thinking about doing.”

Vrabel is right: the Titans didn’t win. But given how many of the cards were stacked against them  —  the injured starting quarterback, the injured first-round rookie wide receiver, the banged up offensive line, and the third-round rookie quarterback making his second career start  —  the 20–17 overtime loss against a bona fide Super Bowl contender certainly felt like a win.

Vrabel will never admit it, but there were plenty of moral victories on Sunday night. And he seemed committed to acknowledging them — indirectly, of course — throughout his press conference.

When starting quarterback Ryan Tannehill, who missed his second straight game with an ankle injury, was mentioned, Vrabel defiantly redirected the attention back to the players on the field.

“There’s so many guys that busted their a– out there tonight,” he said. The players that Vrabel is referencing lost the game, but he was still “more than happy” to passionately defend their performance.

When asked about the play of Tannehill’s replacement — rookie Malik Willis —who finished the game with five completed passes, 80 passing yards and a 49.0 passer rating, Vrabel’s immediate response wasn’t to concede that his play wasn’t good enough. Instead, he praised it.

“Well, I tell you what, he threw some really nice deep balls,” he said of the 87th overall pick out of Liberty, who led the Titans’ offense to just 57 total passing yards in almost five quarters. Willis, by all metrics, had a horrific game, but Vrabel didn’t appear concerned enough with his struggles to even acknowledge them.

And why would he be?

His rookie quarterback, widely accepted as a long-term project who wouldn’t be ready to start in his rookie year, had no business hanging with Patrick Mahomes.

The same can be said for the Titans themselves, who have been clear in their commitment to retooling a roster that was good, but never quite good enough to seriously contend for a Super Bowl.

The Titans crashed out of last season’s playoffs, losing in the AFC Championship Game, Wild Card Game, then Divisional Round in three straight years, respectively. Vrabel and General Manager Jon Robinson knew the time for change had come.

So change came; star wide receiver AJ Brown was traded to the Eagles and Julio Jones was cut, replaced with rookie first-round pick Treylon Burks and veteran Robert Woods. Tannehill remained, but the Titans’ selection of Willis in the third-round—a player whose potential far exceeded that of most non-first-round quarterbacks — loudly flipped the hourglass on his career in Tennessee.

That’s what makes this 2022 season so unusual for Vrabel. The goalposts are different ; the aim is not a Super Bowl, or Super Bowl contention or even a playoff appearance.

The goal is progress. Development among the team’s fresh young core (Willis, Burks and co.) amidst simultaneous refinement of the foundational pieces that have been deemed worthy enough to stick around . That doesn’t appear in the wins or losses column. Vrabel may say that winning is “all we’re thinking about doing,” but that, for lack of a better term, is a lie.

Yet here the Titans are, again firmly in the lead in the AFC South with no conceivable obstacle on their way to another playoff appearance.

It’s a testament to Vrabel and his staff, and to the direction they are taking the franchise by sacrificing their immediate success for long-term profit. The foundation that Vrabel has built, and the Titans’ unbreakable identity that comes with it, has never looked stronger.

It was the story of their performance at Arrowhead Stadium on Sunday night. The defense played about as well as any unit can against Patrick Mahomes—silencing Kansas City’s run game and physically tormenting the Chiefs’ receivers in man coverage, forcing the league’s best quarterback to beat them by himself. Mahomes, of course, did beat them by himself, after three quarters of timely plays from the Titans’ defense that included a crucial third-down sack and an interception on the Chiefs’ own 38 yard line.

Mahomes finished with a flattering 446 passing yards , every single yard worked tirelessly for, and most purely the result of his unassailable creativity in the scramble drill, a corner the Titans’ defense did excellently well to force him into.

Tennessee ran out of gas in the fourth quarter  after endlessly chasing Mahomes around for the first three, best exemplified by their back-breaking fold on a 3rd-and-17 in Chiefs’ territory with six-and-a-half minutes to play.

Vrabel’s defense did everything they could against the NFL’s most dominant player. It was a loss on the schedule, but a clear moral victory . Vrabel, to the most trained eye, seemed more than content with the results.

It was the kind of defensive performance that confirms for the fifth-year head coach the validity of the foundation of his team. With edge rusher Harold Landry, safety Amani Hooker and cornerback Elijah Molden all out with injuries, the Titans defense —  through shear force of personality  —  limped into Arrowhead and put down the most impressive defensive display against the Chiefs all season.

This was not a fluke. This defense works, has continued to work despite crippling injuries, and will continue to work when fully healthy again.

It was an offensive performance on Sunday night, and all season, that spelled out why Vrabel and Robinson knew changes were needed.

It was all frustratingly familiar. Run rampant with Derrick Henry out of the gate, jump ahead going into halftime and fall flat in the second half when the Chiefs inevitably stack the line of scrimmage to stop the run game.

Henry ran for 115 yards, but only 31 in the second half. The offense scored just three points after half-time, gifted to them by that defensive interception. When the run game dried up, the Titans’ passing game stalled. In the second half, Willis was sacked as many times as he completed a pass. Not a single Tennessee wide receiver recorded a reception in almost five quarters of play. The offense’s longest passing play of the game — a 48-yard screen pass to rookie tight end Chig Okonkwo— wasn’t even thrown beyond the line of scrimmage. The passing attack, gifted an eight-point fourth quarter lead by the running game and the defense, just needed to hold serve.

They couldn’t, a familiar sight for Vrabel.

In that ever-so-important playoff loss against the Bengals, Vrabel’s defense held Cincinnati’s offense to just 16 points entering the last three minutes — only for Tannehill to throw three costly interceptions in a three-point loss.

The last of those three interceptions, thrown in their own territory inside the two-minute warning, handed the Bengals perfect field position for their game-winning field goal.

It was precisely the moment that the clock on the Tannehill-led offense started ferociously ticking. Vrabel had seen enough, and in came the change that has come to define this 2022 season.

So why, nine weeks into this new offensive era, are the same problems derailing what should be statement wins against AFC contenders?

The answer is what makes change in the NFL so daunting: that new era isn’t actually here yet. Tannehill, the poster child of the failed old guard, is still the starter; and Willis, the leader of the new guard, was never supposed to be ready this year. The Titans have tasked themselves with ushering out the old era, fostering the new era, and maintaining the surrounding cast that neither can live without, all at the same time.That doesn’t happen overnight.

And there were moral victories on offense Sunday Night. Like Vrabel noted, Willis threw plenty of impressive deep balls  and was a nightmare to contain in the pocket.

The arm talent was on display, so was his elite ability on the ground — evidence that the pillars of his potential are translating to the professional game. Five completions or 50 completions, the translation of his rare traits are what the Titans need to see. And they saw it.

They will always rely on Henry and the ground game, looking to create advantageous passing opportunities off of it . It’s part of the foundation for which it will be critical for the Titans to maintain ,  a platform for Willis and the rest of the new era to stand on.

But Willis is the key. He has the elite potential that Tannehill never did, and thus the ability to take over games when opposing defenses, refusing to let Henry continue to churn through them on the ground, force him to. Tannehill was always a passenger, adequately capable of doing everything needed to keep Henry’s train moving. When defenses sold out to stop that train —  particularly in January  —  Tannehill was stopped with it.

Willis is different; theoretically, he can drive the train himself. It’s all still in theory, of course, and positive development at the position is never a guarantee, but the Titans know he can get there and they know Tannehill can’t. Their last three playoff losses have shown them that difference is all that matters.

Vrabel was forced to pick between the devil he did know  and the devil he didn’t, and chose the latter. That’s a decision that takes the kind of blunt, risk-accepting personality that success in the NFL requires.

It’s also the kind of decision that calls for a solid, reliable support system. In other words :  the Titans are going to need a good team for this to work. Willis needs help; he needed it when he was drafted, he needs it just as much now. If there was one lesson learned from their overtime loss in Kansas City — the most important moral victory of all  —  Vrabel’s team can give their young, uber-talented quarterback the help he needs.