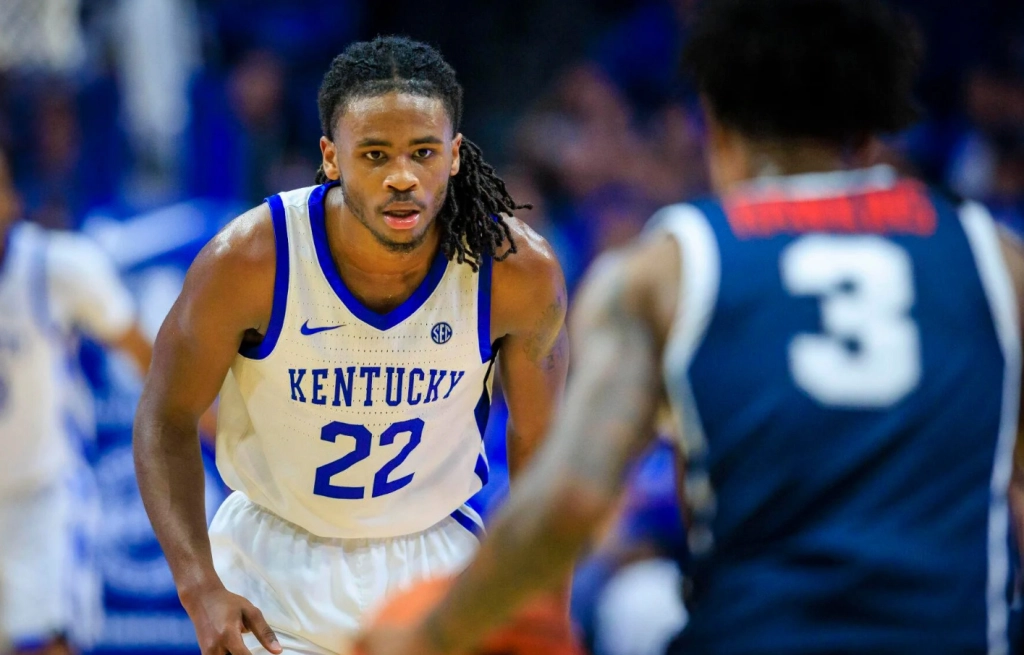 Are you ready for what might be the greatest NBA Draft class of all time?

I’m not kidding. The debut of college basketball on Monday marked the official beginning of what many consider a once-in-a-generation draft. The 59 players who end up getting drafted in June will have their names enshrined in sports history as members of a class that will change the NBA forever.

It is entirely possible that for the first time in history, none of this summer’s top three picks will have played a second of NCAA basketball: French phenom Victor Wembanyama, G-League Ignite’s Scoot Henderson and Over Time Elite’s Amen Thompson. However, that doesn’t mean that this year’s collegiate talent won’t influence this year’s NBA Draft, and based on some of the performances I saw on Monday, I’d almost guarantee that it will.

Welcome to “With the First Pick,” where we prepare for the 2023 NBA Draft by analyzing some of basketball’s best prospects, debating performances, skill set and possible team fit. Of course, it’s still very early in the draft process, and a lot will change from now until June. But it’s better to get to know this class as soon as possible, as many of these guys will be playing against your favorite NBA team next year.

Some of the draft’s top college prospects, including Arkansas’ Nick Smith Jr., Villanova’s Cam Whitmore, and Duke duo Dariq Whitehead and Dereck Lively II, did not play on Monday. But many others did, some firmly placing themselves in the conversation for a Top 10 pick.

Kentucky’s Cason Wallace led that charge with what was, in my opinion, the most impressive performance of the night. Wallace finished with 15 points, eight rebounds and nine assists against Howard on Monday, going an impressive 7-for-11 from the field and making one of his two 3-pointers.

I like his shooting form and think he has great catch-and-shoot potential, but Wallace was not just dominant on offense. His stellar perimeter defense put on full display his two-way talent that scouts praised him for. Wallace has very active hands, especially compared to his fellow guards. He’s always trying to look to catch his defender off-guard or go for a steal. There’s not much that he won’t do for a steal either; I love how he jumps at overhead passes to try and deflect them, but Wallace is especially good at getting stops. He locks onto his opponent at all times and navigates screens very well. All of that proves that Wallace has the heart and hustle required to succeed on defense at the NBA level, in addition to his strong shot-making skill set. This will be the first of many times we hear Wallace’s name leading up to the draft process.

Chris Livingston, Wallace’s teammate, also put on a solid performance against Harvard. Livingston only played 19 minutes and finished with nine points, but he made four of the six shots he took and one of his two 3-pointers. I think he’s a little bit underutilized because there is a lot to like with Livingston’s game. From what I saw, he seems to me like he could potentially be a good off-ball scorer with strong catch-and-shoot potential, especially on the corners.

He showed immense confidence too, making an extremely tough corner three on the move, and a number of drives that prove he’s not afraid of contact. That confidence can be a double-edged sword. His shot selection needs a little bit of work, and for that reason I think he’s a little too raw for the NBA as a scorer at this moment. But there’s still plenty of time for him to fix it, and I wouldn’t be too surprised to see Livingston’s name being called in the middle of the first round.

Two of my personal favorite players in this year’s draft are Baylor’s Keyonte George and Alabama’s Brandon Miller, primarily due to how good they are on offense. George gets buckets better than most in this draft class, and he does so all over the court with enough skill and grace to make NBA guards jealous.

Miller has a gorgeous jump shot and can knock them down from mid-range exceptionally well, but he also possesses NBA-level passing and finishing ability. I am much higher on both of these guys than most people are because of how much promise I see in their scoring abilities, especially Miller.

Neither had particularly elite scoring performances on Monday, with George finishing with shooting splits of 31/25/75 and Miller shooting 43% from the field while missing all six of his 3-pointers (inconsistency from beyond the arc is my only major concern with Miller as of right now).

However, both players showed enough confidence on Monday to take as many shots as they did (13 and 14, respectively), and have previously showed the talent and skill to make those shots go in. I’m not worried about either of them; those shooting splits will be a lot higher in the future, and considering how much praise their teammates and coaches give them, I expect their draft stock will soon go up, not down.

Another player I’m higher on than most people are is Tennessee’s Julian Phillips, but for very different reasons. Phillips finished Monday’s game against Tennessee Tech with eight points off of 33% shooting from the field and missing all of his three pointers, six rebounds and three assists.

Unlike George and Miller, Phillips does not have a track record of excellent shot-making, and I’m less inclined to believe that those numbers are going to improve. That’s not Phillips’ selling point; it’s his defense. Phillips has a ton of length and athleticism, a valuable combination that he uses to stick his opponents on the pick-and-roll and on drives. He even took a few charges, proving that he has both strength and the dedication to getting a stop by any means necessary.

Phillips has the tools to be a shot-blocking threat and possibly a solid off-ball cutter. He plays tough, quick and tenacious defense for someone of his size (6’8″). He will fit on just about any NBA team—especially a playoff team—as a defensive-minded role player.

The Houston Cougars have quite a few guys I could see being taken in the first round. The player I think will be taken first is Jarace Walker, a tough, physical forward with NBA-ready size. Most people of Walker’s size tend to camp in the post, screen and catch lobs, but not Walker.

He has quickness, footwork that most 6-foot-8, 240-pound players just don’t have, which he uses to skillfully beat his man on his way to the hoop, but he doesn’t have to rely on that. Like I said, he has the size and athleticism to power through opposing defenses, bulldozing his way to some extremely tough finishes and rebounds. I think Walker is one of the best and most instinctive rebounders in this draft class. He’s active off-ball and on defense enough to give him a sense of versatility, but he’s definitely best with the ball in his hands. His debut wasn’t anything special, going 3-for-14 on his way to just eight points, but we saw flashes of the athletic big man that can excel in the modern NBA.

Walker’s teammate, Marcus Sasser, is perhaps his polar opposite. He finished Monday’s game with 21 points on 50% shooting from both the field and from three, including a couple of incredibly impressive shots. Sasser not only has NBA-range and scoring ability, but incredible confidence and leadership that you just can’t teach. I think he’s firmly a first-round talent at this point, and he would thrive as a floor-spacer and scorer on any team.

There were two players I was not particularly impressed with on Monday: Arkansas’ Anthony Black and Duke’s Tyrese Proctor. Both point guards are elite playmakers with strong defensive potential, but their severe lack of shooting holds them back. Black utilized his 6-foor-7 height—gigantic for his position— by nabbing seven rebounds, but he did not make much else of an impact.

In 30 minutes, Black finished with only three points off of an abysmal 14% shooting from the field, and his three assists did not make up for it. Proctor was even worse, finishing with just four rebounds, two assists and two points off of two free throws, missing every single one of his eight field goal attempts. I really like both players, and I think they both can be special in the NBA, especially as shooters, but this game exploited their biggest weakness, and I have worries about how effective they will be in the league if they can’t convert their shots.

Gradey Dick from Kansas was also a surprise, but in a good way. Dick finished with 23 points off of 69% shooting from the field and 67% from beyond the arc, but more impressive was how he got those shots. Dick is far and away the best shooter in this class, as seen through his high school career and dominant college debut.

He has the confidence to take many of those shots as well, even those that are extremely tough, but what I didn’t expect was how good of an athlete he was. He’s a very, very good finisher, much better than I initially gave him credit for. He’s graceful through traffic and embraces contact well. I think Dick could be a dark horse lottery selection in June, as plenty of NBA teams can’t pass up someone who is an elite shooter and a great finisher.

Nobody surprised me more than Michigan’s Jett Howard, my biggest riser of the night. When I first started scouting these prospects, I had Howard as an early second-round pick, but a couple of stellar preseason games caused me to move him up into the late first round.

And now, I don’t think there’s any doubt that he is, at bare minimum, a first-rounder. He finished with 21 points off of 53% from the field and 50% from three on Monday. Almost all of the shots Howard took were highly contested, even a few with a hand directly in his face. It takes a special kind of confidence to be able to pull that off, and that confidence is tailor-made for an NBA roster.

He’s not just an elite shooter. He showed flashes of decent playmaking, and he knew how and when to feed Hunter Dickinson in the post. I still have some defensive concerns, particularly with his lateral quickness and his defensive attention, but the positives of Howard’s offensive game more than outweigh the negatives. Howard seems to live in the shadow of his father and coach, former “Fab Five” member Juwan Howard, but with more performances like these, he can very easily step out of it and establish himself as a feared player in his own right.

There is still so much basketball to be played before the NBA Draft, and many of these players are only going to get better. Many of these players had strong debuts that seem to indicate future success. Being able to stand out in such a talented draft class is a skill in its own right, and most of these players proved their ability to do that on Monday. The future of these players is not yet set in stone, but from what I saw, it looks very bright for a lot of them.