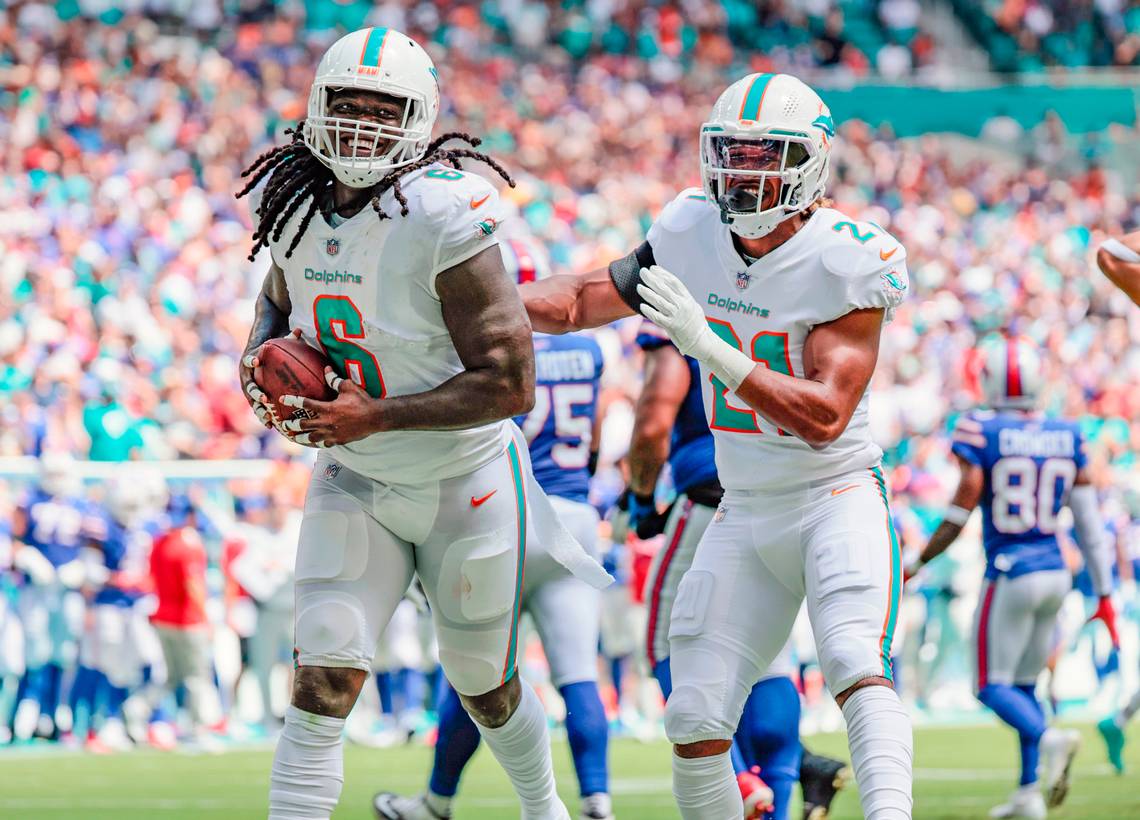 Last season, the Dolphins came out of the gate ice cold, starting 1-7. Almost as if a switch flipped, the Dolphins got Florida-hot, winning seven in a row and eight of their last nine contests. They fell just short in the Wild Card hunt, which led to the controversial firing of Brian Flores.

Replacing Flores was Mike McDaniel, the former offensive coordinator of the San Francisco 49ers. Upon his hire, he immediately called quarterback Tua Tagovailoa and told him, “One thing I know about you, you have the ambition to be great. My job is to coach you to get all that greatness out of you.”

The offseason was full of moves to clean up the team’s weak areas. Xavien Howard was extended to keep the defense strong, Terron Armstead was signed to buff up the O-line and wide receiver Tyreek Hill was acquired in a blockbuster trade with Kansas City that included five draft picks.

Early in the 2022-23 season, the Dolphins have been a force to be reckoned with. Beginning the year 3-0, their wins were far from easy. In Week 1, the Fins defeated the division-rival New England Patriots for the fourth time in a row dating back to December 2020. Lamar Jackson put on a clinic in Week 2 with the Baltimore Ravens, but it was not enough for the Dolphins’ 42 points. Finally, David took down Goliath in Week 3, as the seemingly untouchable Buffalo Bills crumbled in a 21-19 contest.

The key behind these victories is none other than QB1. Tagovailoa has been seen in both positive and negative lights throughout his first two seasons. McDaniels and the organization fully put their faith in their quarterback, and he is proving them right. Tagovailoa currently ranks second in passing yards (925), yards per attempt (9.2) and passer rating (117.8). He also ranks third in touchdowns (8). With the offense working like a well-oiled machine, the Dolphins could cause some trouble come late January.

There must be something in the Florida water as the Jacksonville Jaguars have the potential to go from drafting first overall to entering the Wild Card chase. Calling last season a disaster for the Jaguars might be an understatement. The Jags nabbed Clemson’s Trevor Lawrence with the top pick in the 2021 draft and goaded Urban Meyer, a college football coaching legend, to the pros.

Meyer led Ohio State to a 187-32 record and led Florida to two national titles. Entering the NFL realm was jarring for Meyer, even saying, “Every week is like playing Alabama.” To go along with that, Meyer lacked the control over professional players that he had over collegiate athletes. This included calling his assistant coaches “losers,” while dubbing himself a winner; an incident at a bar, and quite literally kicking the kicker.

13 games into the season, Meyer was fired as Darrell Bevell took over as interim head coach. In the offseason, Doug Pederson was crowned the new coach of the Jaguars and the team has not looked back.

In Week 1, some poor late-game decisions led to a tough defeat against the Washington Commanders. With the newly revamped Indianapolis Colts and the rising Los Angeles Chargers next up on the schedule, the Jaguars looked doomed to repeat last season’s failures. However, Jacksonville not only defeated the Colts, but also blanked them 24-0. The following week, Pederson’s squad dominated the Chargers with a 38-10 victory.

Similar to the Dolphins, the biggest mark of the changing tides lies within the franchise quarterback. Trevor Lawrence struggled in his rookie campaign with a negative TD-to-interception ratio (12:17) and a 71.9 rating. This season, Lawrence already has six touchdowns to just one interception as well as a 103.1 rating.

The Jaguars are in good hands and with proven wins against tough opponents, they could completely upend expectations.

This is not Eli Manning’s New York Giants. Or at least it has not been since he retired in 2020 and Daniel Jones took over. The Giants have only made the playoffs once since their Super Bowl victory in 2011, which was 2016 when they were routed by the Green Bay Packers 38-13.

Jones’ reign as QB of the Giants has often been likened to a roller coaster with a parade of ups and downs. What makes Jones so frustrating is that he is like a chef with all the best ingredients, but the inability to cook a meal. He has the mobility, speed and accuracy elite signal-callers possess, but his poor decision-making has made him unable to make the next leap. This season has been called a make-or-break year for the Duke alum.

Last season, the Giants were 4-13 and drafted fifth overall, picking up defensive lineman Kayvon Thibodeaux in April. This season seems to be a sharp turn of events. They started their season by inching a victory against the Tennessee Titans in a tight 21-20 matchup. Week 2 was another close game with a 19-16 defeat of the Carolina Panthers. Finally, the Giants were humbled on Monday Night Football in an ugly, but competitive 23-16 loss to the Dallas Cowboys.

While I am not as high on the Giants as I am with the Jaguars due to the closer scores and lower difficulty of competition, it is hard to deny the fact that Jones has led his team to a quality 2-1 start to the season.