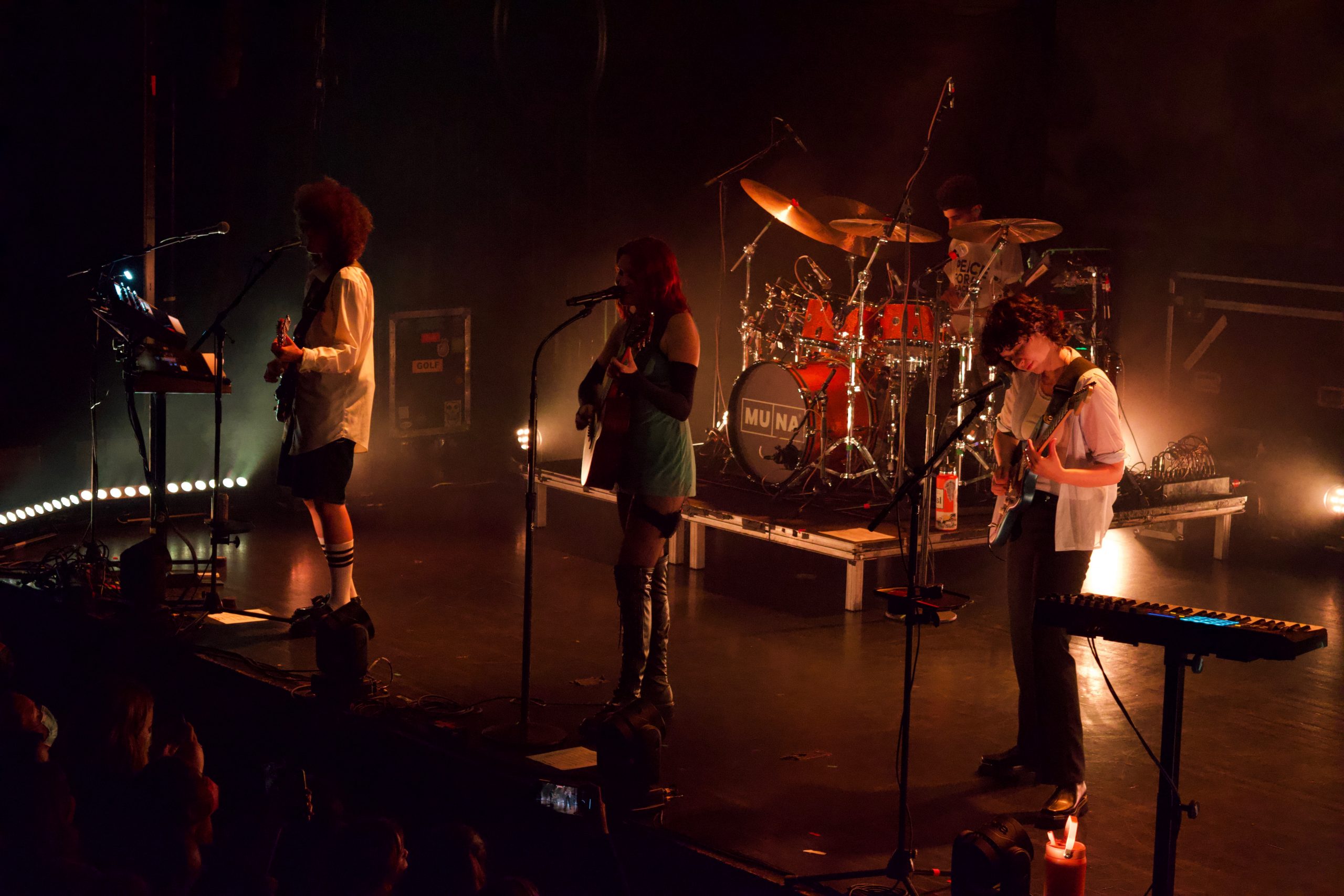 “That song was for the healing girlies. This one is for the messy girlies. And you can be both!”

These were the words of Katie Gavin, lead singer of queer indie-pop band MUNA, at the Royale on Monday, September 19th. The show, preceded by high-energy pop-punk opener Meet Me at the Altar, certainly proved Gavin’s statement to be true in the best way. Although said jokingly, her comment encapsulated the environment created by Gavin and her bandmates Josette “Jo” Maskin and Naomi McPherson that night: a safe, loving space fit for collective healing, queer joy, and yes, a bit of “messy,” chaotic fun.

In light of the success of pop single “Silk Chiffon” featuring Phoebe Bridgers, MUNA has amassed an adoring fan base, largely made up of young queer listeners. The trio does not take their role as emerging queer icons lightly– throughout the show, they reiterated that their performances were a safe space for individuals with marginalized identities. Their most recent self-titled album from this year explores themes of self-discovery, identity, queer love, and self-love through a synthy, danceable pop sound, making for a concert experience that was as affirming as it was exhilarating.

As hinted at by Gavin’s remark, these themes presented themselves in several ways; after the introspective, “healing girlies” track, “Kind of Girl,” the band jumped right into “No Idea,” a song about having, let’s say, less-than-holy thoughts about someone when they’re not around.

This brings us to the so-called “messy girlies” portion of the performance, and a large part of what makes MUNA such a compelling band to see: the sheer, undeniable sexual tension that the trio plays around with onstage. Throughout the show, the three would dance with one another in various duos while making intense eye contact– at one point, during “No Idea,” Maskin got down on their knees while Gavin leaned over them, at which point the audience went absolutely wild (understandably so).

The band’s interactions with one another, flirty or not, were a large part of what made them such powerful performers. Maskin– whose lead guitar and electrifying stage presence lit up the room–  would actively interact with the audience, encouraging them to sing along to Gavin’s clear, bright vocals. Gavin, in turn, commended McPherson’s intricate work on the synth in between songs. The way that they each encouraged one another and openly expressed not only their identities, but their bond as a group, made them that much more enjoyable to watch and established a feeling of connection and appreciation for each individual present.

This sense of safety, love, and community could be felt from not just the stage, but throughout the room. Watching the crowd from the mezzanine, one of my favorite things to have witnessed was the love being shown amongst the audience members– whether dancing and screaming along to the sugary, pop-anthem-esque “Silk Chiffon” or waving phone flashlights and holding one another during the slow, wistful “Shooting Star,” the sheer love expressed between the audience and the band was no accident. Rather, it was the result of a cultivated sacred space made possible by MUNA’s candid expression of emotion, sexuality, and a genuine love for the music and their fans.