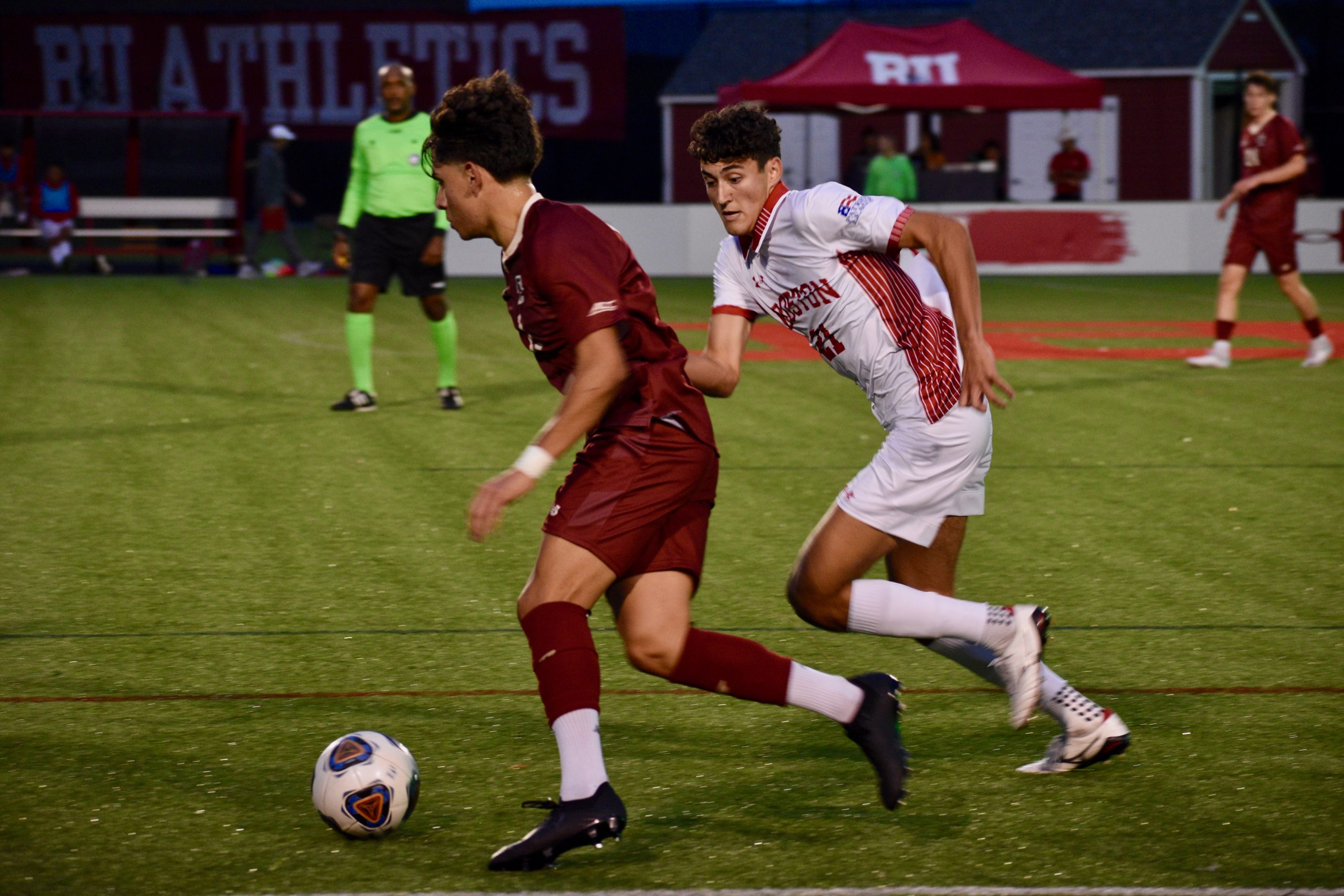 Coming off a disappointing 3-0 defeat to Colgate to start its Patriot League season, BU came out of the blocks firing against its Commonwealth Avenue rivals, demonstrating high energy levels all across the field. Within the first three minutes of the game, Terrier forward Brian Hernandez got through on goal and just barely missed, with his effort going over the crossbar.

Just two minutes later, the Terriers found themselves through on goal again before BC defender CJ Williams brought down Hernandez. Even though Williams was the Eagles’ last defender, he got away with just a yellow card instead of a red.

“If you have VAR, maybe they look at that,” said BU Head Coach Kevin Nylen. “At the college level, we kind of just move on. We have to have a bit of amnesia and not worry about every call.”

BU seemed to be defensively everywhere against its rival, allowing BC few clear-cut chances in their own penalty area.

“I thought overall it was a really solid performance from our team tonight,” Nylen said. “They had some chances as well, but I thought at the end of the day it was a good midweek result for us, specifically after what took place on Friday in our first league game.”

Throughout the game, the quality of passing was not particularly high, and there were plenty of challenges flying in from both teams. BU expected to face more possession and passing from an ACC team like BC, but the style they faced was more similar to a Patriot League game.

“We have to be prepared for direct play and prepare for teams that play [on the ground with more possession],” Nylen said. “There’s no right or wrong way to play this game and that’s the beauty of our game.”

After failing to deal with the physical side of the game against Colgate last time out and conceding goals following set-pieces, BU stepped up in that department against BC.

“I think we dealt with their direct play,” Nylen said. “They have some really good targets on set-pieces and we didn’t give up a goal on a set-piece.”

While BU showed defensive cohesion against BC, the Terriers also had chances to go for the win in the second half. Terrier forward Andrew Rent nearly won it for BU in the 80th minute after a pass from Colin Innes, but couldn’t make his way past the BC goalie to score.

While BC rarely threatened the BU goal during the game, goalkeeper Francesco Montali made a couple of big saves against BC forward Amos Shapiro-Thompson late in the game to seal the draw for BU.

“Anytime you have a clean sheet, I think it speaks volumes not only on the goalkeeper, but also on the team defending,” Nylen said. “Montali gets it on the stat sheet, but I know for him there is a big sense of pride for the team to have a clean sheet.”

Heading into Saturday’s home game against Lafayette at 6 p.m, Nylen said he is proud of the maturity  shown by his team so far this season.

“The response that we got tonight shows the maturity of our group,” Nylen said. “We are not a finished product, but seven games into the season, to have this response after a tough week of our first two losses, it shows a step in the right direction.”