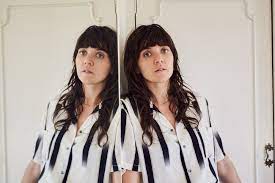 On Monday, September 12th, Australian indie rock performer Courtney Barnett took to the House of Blues stage with opener We Don’t Ride Llamas. The show drew a mixed crowd, and for good reason– Barnett’s discography, strung together by her ever-present witty lyricism, ranges from a grittier rock sound in her earlier tracks to the more mellow pace of her most recent album, “Things Take Time, Take Time” (2021). This  brought together older “dad rock” enjoyers and young indie music fans alike for a collectively unforgettable experience.

We Don’t Ride Llamas, an LA-based band of siblings whose style is a unique blend of pop-punk and R&B, kicked off the evening with a bang. Riling up a crowd on a Monday night is no small task, but We Don’t Ride Llamas was up to the challenge. From the slow, dreamy sweetness of “Blueberries” to the more indie rock sound of “Venus & Mars,” they owned the stage with grace, passion, and (dare I say) incredible punk-style outfits. At the end of their set, the room was not only abuzz with anticipation for Courtney Barnett, but also with the excitement of discovering a new possible favorite band in We Don’t Ride Llamas.

Barnett opened her set with “Rae Street,” one of her many songs in which she manages to make the ordinary– daily happenings outside of her window– extraordinary. Her band, composed of drummer Dave Mudie and bass player Bones Sloane, remained on a raised portion of the stage, bobbing their shaggy haircuts that were almost comically similar to Barnett’s. Barnett, expertly managing not only vocals, but also rhythm and lead guitar as well, would often join them upstage to jam at the end of each song. Her closeness with her bandmates was apparent; viewing it felt like being let in on something special and intimate.

As she made her way through the high-energy “City Looks Pretty” (my personal favorite) and fan-favorite “Elevator Operator,” one thing that could not go unnoticed about Barnett as a performer was her sheer endurance. Barnett seems to have a boundless energy that only genuine rockstars can truly possess. She wasted no time onstage– aside from the occasional humble “thank you,” between tracks, Barnett hurtled from song to song, absolutely throwing her entire being into each and every one. Some of my snapshots from the night include her raising her guitar high above her head, leaning over it like a crutch, and holding it out in front of her as an offering for the audience– the guitar almost an extension of her body.

That’s not to say that the show didn’t have its slower moments– in fact, I would argue that these moments were expertly scattered throughout the performance and made it all the more powerful. Barnett’s signature exploration of the mundane through her simple, yet clever lyricism in “Depreston” seemed to hit home at just the right moment for my neighbors in the audience whom I had spoken with before the show– the three college freshmen from California held one another and shed a few tears at the lyric “it’s a California bungalow in a cul-de-sac.” A tangible sort of magic filled the room during the same song, when the audience joined Barnett in a round of the final line: “If you’ve got a spare half a million, you can knock it down and start rebuilding.” Barnett’s final song of the evening was on the slower side as well: after a full 16-song set and being ushered back onstage for an encore, Barnett played the self-reflective, vulnerable “Before You Gotta Go,” titled rather fittingly to finish off the night.

If you have never heard of Courtney Barnett before, or have never seen her live, I could not recommend an artist more. If her magnetic, passionate stage presence isn’t enough to convince you, or if you’re waiting for the next time she comes to Boston, I would implore you to give her music a listen. Barnett’s lyricism– incredibly honest, oftentimes funny, and consistently clever– is a voice that I think that a lot of us, particularly those of us in college, need to hear. Although Barnett herself is 34, the angsty, indie-rock edge in her music is incredibly fitting for this coming-of-age stage of life, while her lyrics tie together refreshing humor, wisdom, and a beautifully encouraging wonder at the small details of daily existence that can be lost on us. To have seen her live this past week was an incredible experience that I can only hope other WTBU listeners will get to have as well.

In her song, “Avant Gardener,” Barnett sings, “It’s a Monday, it’s so mundane.” However, thanks to Barnett herself, I can confidently say that this past Monday at the House of Blues was truly anything but.