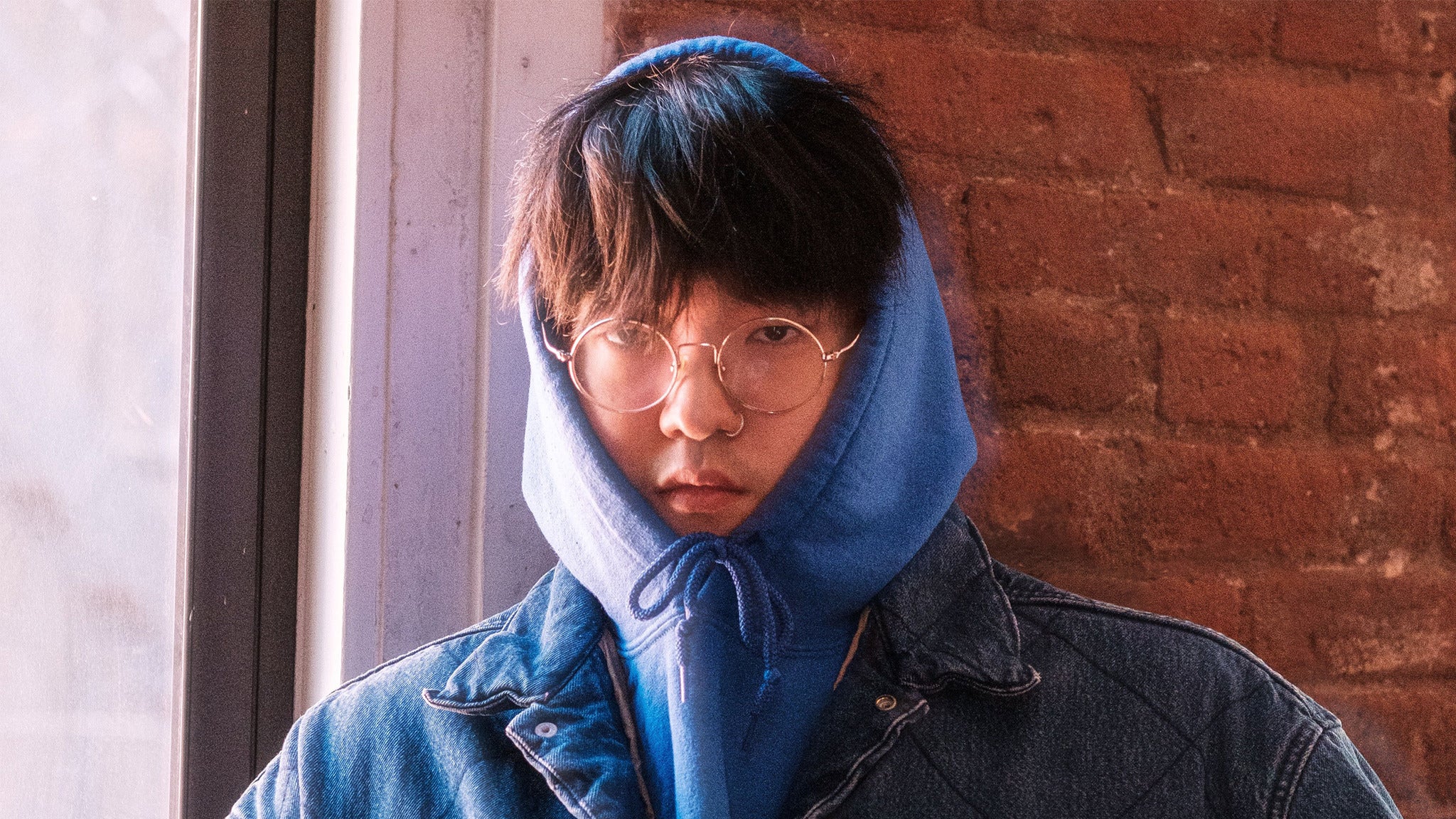 How did you start music, and what stage do you think you started at in life?

I know I started in 2017 kind of. I originally got into singing because of a crush that I had in school. I was new to school, and there was this girl I was really crushing over, and she worked for the talent show committee. So I was like “okay, I wanna get her attention”. Because I wasn’t someone who spoke a lot. I was very quiet, to myself. But I just thought “okay, I’m gonna sing and see what happens”. And so I did the talent show, I got third place. Over time, everyone at the school was like “yo you have a great voice, you should pursue this” and I was like “yeah, why not? I think that’d be fun.”

Was it a cover or was it original?

But I just feel like at that time, I just didn’t want to grow up— like no offense to anyone that does have an office job or anything, but me personally, I just don’t want to be in an office job. I don’t want to sit in a cubicle and just go on ‘Excel’ or whatever. I always want to do more. So, I kind of feel like it was a gateway from that. Because I’ve always had fun doing it.

Would you say when you make your music is it about a certain instance or a certain person? [Laughing] Maybe specifically a certain love interest in your past?

I mean it’s really a blend of all of them. I know some of my songs I wrote off of my friends’ experiences. Some I wrote because I watched a movie and I felt inspired. A lot of my writing comes from movies, like “Pick Up Your Phone”? I watched Men In Black for that, and so I just made that song. So a lot of these songs are not only from me, but it’s just from everything that’s in my life. There’s my friends, or a movie, something I see outside in public. I’m just going to write about it.

Has there ever been a song where you’re just like “this just sounds dope as f*ck”, and you just put it out there? Or do they usually have some other push to them?

Well the thing about me is that I’m very hard on myself when it comes to making music. Some days I’ll just be like “whatever, I’ll just put it out”. For example, “Over 85”? I made that song in three days.

And that’s your top song, right?

Yeah it is my top song.

Originally I was just like “eh”. But I got over it, you know? So I put it out, it ended up being my greatest song so thank you guys. There are a lot of other songs in my bank of music where I’m not planning on it seeing the light of day, or I might go back and be like “alright this is not so bad, I’m gonna continue this one”.

I also know that you did go on a hiatus. So I wanted to ask, how were you able to come back from that? Because I know it’s definitely difficult to go from a hard stop to going back into it and trying to pursue your passion again.

Yeah, I mean, I think genuinely at that time I was going through something with school, you know just connections I had in my life. It was kind of tough for me to even go outside, or even get on my computer to make music. But I think in the back of my mind— at that time I had a very very small fanbase, who I could just remember their names, I saw them all the time, they were so supportive —and I just think about all their DMs like “hey when are you coming back?” And it’s kind of crushing when you see their messages but you’re like “I don’t really feel like I’m back”. So what do you tell them? So over time, I kind of just told myself I’m going to get up, and I’m going to actually force myself to do something. That was how I got out of my hiatus. I would say it was originally the people that believed in me that kind of got me out.

It’s a bit of both. Because especially with my name Hojean, that being my Korean name, huge identity crisis with that. When I was younger, I never felt connected to my Korean side. And I’m sure that’s something a lot of people of color can relate to. So, not only do I do it for the fans, but I’m also kind of doing it for me, because I feel like it’s a really cool way to show respect for my own Korean name, by making music and putting it out there. People know my name now. So it’s cool, it’s something I didn’t like before, but now it’s like people know it. And they connect it to good music. That’s cool to me.

Also, I didn’t want to go into the industry as “Justin” (which my name is Justin) because there’s Justin Bieber, Timberlake, it’s like “man, how am I going to go against that?” So I was like “Hojean”!

Who would you say is your biggest inspiration?

I don’t know. That’s kind of hard, because the thing about me, especially with other musicians: I love and respect so many other musicians but I can only ever listen to the verse or the chorus of a song because my attention span is not that good. For me, I just hear the first verse or the chorus and I’m just like “that’s a good song!” (and I just never listen to it again). But that’s because I’m just built that way. And it’s not good but I just feel like it’s a lot of things I’ve collected through my life in little snippets, so I can’t really say directly who has inspired me, but I can definitely say it’s the small things in my life that has kind of built up to what I create now.

So would you say you’re just living life day-by-day, and that’s what motivates you?

Now, for a different kind of question: I wanted to ask about the hoodie. What’s the story behind it?

The whole hoodie thing sort of started when I was in college, and I think this might have been around the same time. For me I can just kind of get into a hole and just feel very… like a turtle would. They go inside their shell, they don’t come out. And I do that a lot. Especially mentally and physically. Back in college, when there were people who would just want to bother me— I don’t know. I didn’t want to be bothered at all. I wasn’t doing so good in school, and once again I was having this relationship situation. I didn’t want to talk to anybody. So I would just go to school in and out, and the best way for me to do that was putting on a hoodie, and kind of telling people “hey, I’m not in the mood”. And when I did it, I felt a weird instant click to the hoodie. Like “I feel so protected, I feel like people know not to mess with me right now.” I feel very much like it’s a constant hug around my entire body. That’s the way I like to think about it.

Basically, I think this hoodie (in a way) got me through some really tough times. You know, through school, just because I don’t know— when people saw, they just knew not to bother me. For me, I think sometimes being alone and being in your own emotions is really important. And that’s what I did. That’s what I got out of that. I kind of took the hoodie with me, because it was really comforting for me. I don’t wear it all the time, but when there are times I feel super anxious, or when I’m just nervous, when I put the hoodie on, I feel like I’m just not anxious anymore. I feel protected.

Is there a specific hoodie?

It really varies. Some of them are from thrift stores. I get some from online shopping, or just from the mall. But it’s not the same hoodie.

Well, I think the one I have on right now might be Gildan?

Okay, what’s your favorite hoodie brand then (that you’ve been rocking so far)?

Honestly, shout out Gildan. They make some pretty cheap, pretty comfortable hoodies. So sponsor me if you want.

I’ve tried making my own hoodies, it’s always kind of difficult. I wanna eventually get to a point where I can design my own hoodies, have cool patterns on my hoodie, cool shapes or something. Really get to experiment with it, you know? And kind of go deeper into that brand. But that’s going to take some time.

Let me ask you another question about your music: for the music that you make, would you say that there’s a specific emotion that you want them to feel?

Through my music, I just like to make music. Like I said, all of the songs that I write are from my own life and from other people’s lives and I just collect it. I just kind of make music off of everything I see. So I hope that translates to other people, whether they want to use that song to advance the feeling of romance, or if there’s songs that give them comfort, or if they hear a song like “oh my god I heard this song two years ago, I love two years ago”, if you want to be nostalgic. I just hope my music provokes whatever feeling that person wants the music to convey.

So you want them to find what they’re looking for?

Yeah, a song can be like that. I know there are a lot of single people out there who love romance songs. You don’t need to be in a relationship to listen to a romance song. For me, being single, I make romance songs all the time. So I would like to imagine that even though the lyrics might not relate to you, if it gives you a sort of feeling and you like it just stick with it if you want. I think if you like it, you like it.

What would you say is your favorite lyric that you’ve ever written?

I have a song called “Memory” where the lyrics are really simple. Honestly, there are some songs where the writing is like “well this is great!”. But there are some songs where it’s kind of simple and I like that. For “Memory” its “tell me what you’re looking for / if it’s me consider it M.I.A.”. At the time I wasn’t sure if I wanted to make that the lyric because I thought “what the f*ck is M.I.A.?” I looked it up and it was “missing in action” and I was like “oh, that’s cool!”. So I think that’s probably my favorite line.

Is there a certain brainstorming process for the lyrics, too?

I just watch a lot of movies. Sometimes, for me, in a weird way, when I see certain visuals I can translate it into words. If the coloring in this scene is really pretty, I’m like “that looks like a scene where you want to talk about how pretty the sky is”. So that’s where I get my inspiration from: a lot of movies.