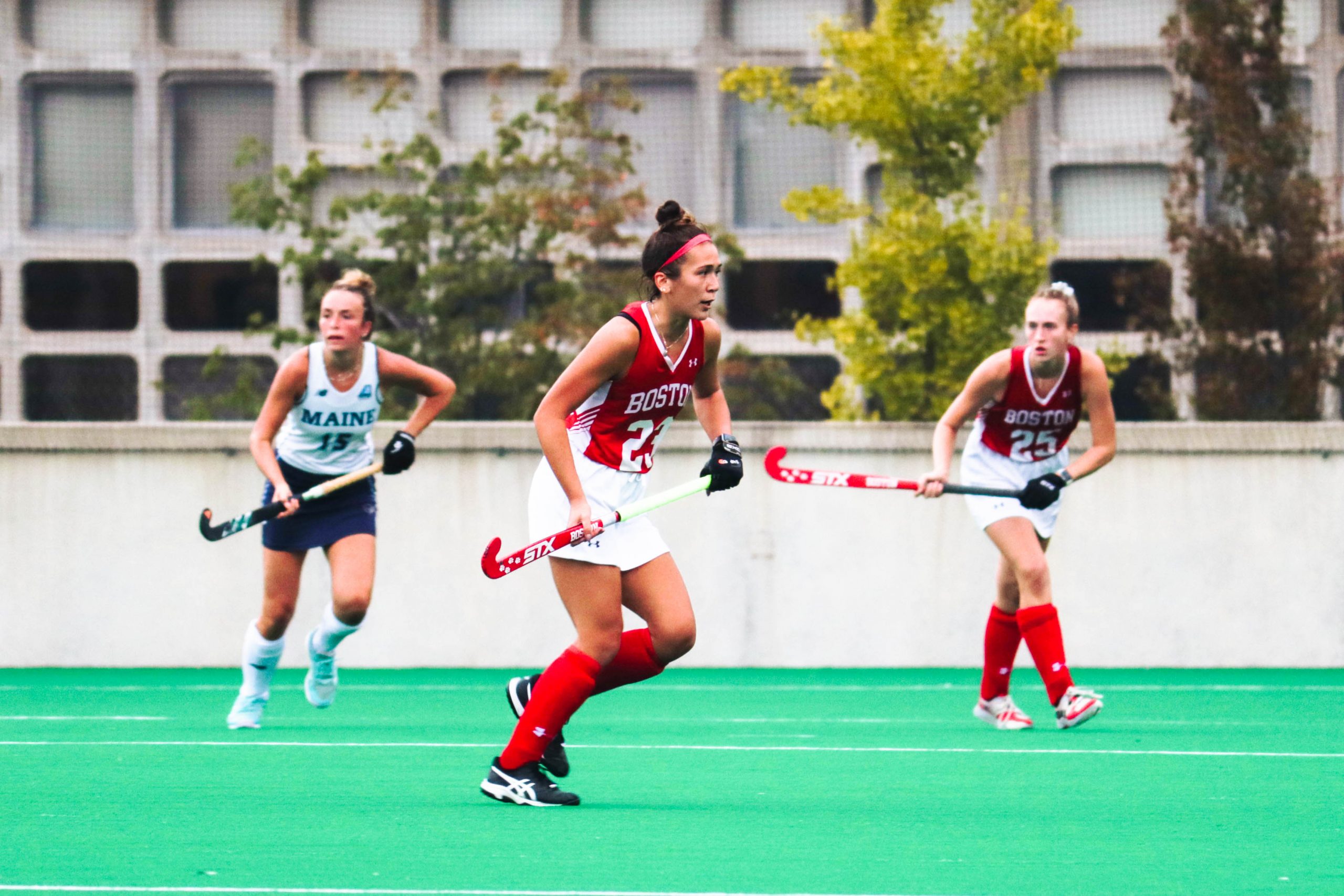 The Boston University field hockey team (2-4) played the University of Vermont Catamounts (4-1) on Sunday at Harvard Stadium. Despite having a stronger offensive game than Vermont, the Terriers fell behind with a 3-1 loss in a penalty-heavy match.

The game started off slow for both teams, and it wasn’t until halfway into the first quarter that UVM started to pressure BU’s defense.The first penalty corner of the game was given to Vermont senior forward Kate Hall by the 7:38 mark, which was followed by back-to-back shots that were both saved by senior goalkeeper Caroline Kelly.

By the end of the first quarter, Vermont grew more aggressive on defense and received two green cards. The first green card was given to Vermont sophomore forward Reggie Hillery almost 30 seconds after being subbed in. Sophia Lefranc picked up the second near the end of the period.

BU dominated the field throughout the second quarter, but couldn’t get past the Catamounts’ first-year goalkeeper Lauren Halenkamp.

The second quarter started off with a goal from Vermont fifth-year forward Maddie Moran, but the Terriers fought back. BU received its first penalty corner at the 16:24 mark, which set off a strong offensive run.

Thalia Steenssens, a junior midfielder, received four back-to-back corners that led to four shots, followed by two more before the end of the quarter. Despite the Terriers’ efforts, Halenkamp blocked seven of the 12 shots BU attempted.

After two more penalty corners were awarded to Tegan Poerio, Vermont received its third green card of the game, given to Vermont first year Mora Fernandez de Oliveira. Despite having a well-fought second quarter, the Terriers were unable to capitalize on scoring opportunities.

The Catamounts received a penalty corner just 51 seconds into the second half that set them up to score their second goal of the game soon thereafter.

Steenssens continued to lead the Terriers’ offense, receiving three more corners. However, BU wasn’t able to capitalize any of the corners and remained scoreless entering the fourth quarter.

BU scored its first goal of the game at the start of the fourth quarter, scored by junior forward Tess Csejka.

Toward the end of the fourth quarter, BU received its first green card of the game, given to senior midfielder Mikayla Crowley. Fernandez de Oliveira also received a yellow card, her second card and the final one of the game.

“They packed in their circle, which makes it really difficult to find the time and space to take the shots,” Paul said. “We’ll be working toward putting some crash balls in there ourselves.”

Despite coming off two consecutive losses, spirits are high among the team going into their first Patriot League game of the season.

“This team keeps getting better and better,” Paul said. “They’re playing tactically well and technically well. We’ll work extensively this week on our attack circle play and hopefully put the icing on the cake.”

The Terriers will move on to play Lehigh in their first Patriot League game of the season at Harvard Stadium Saturday at 1 p.m.