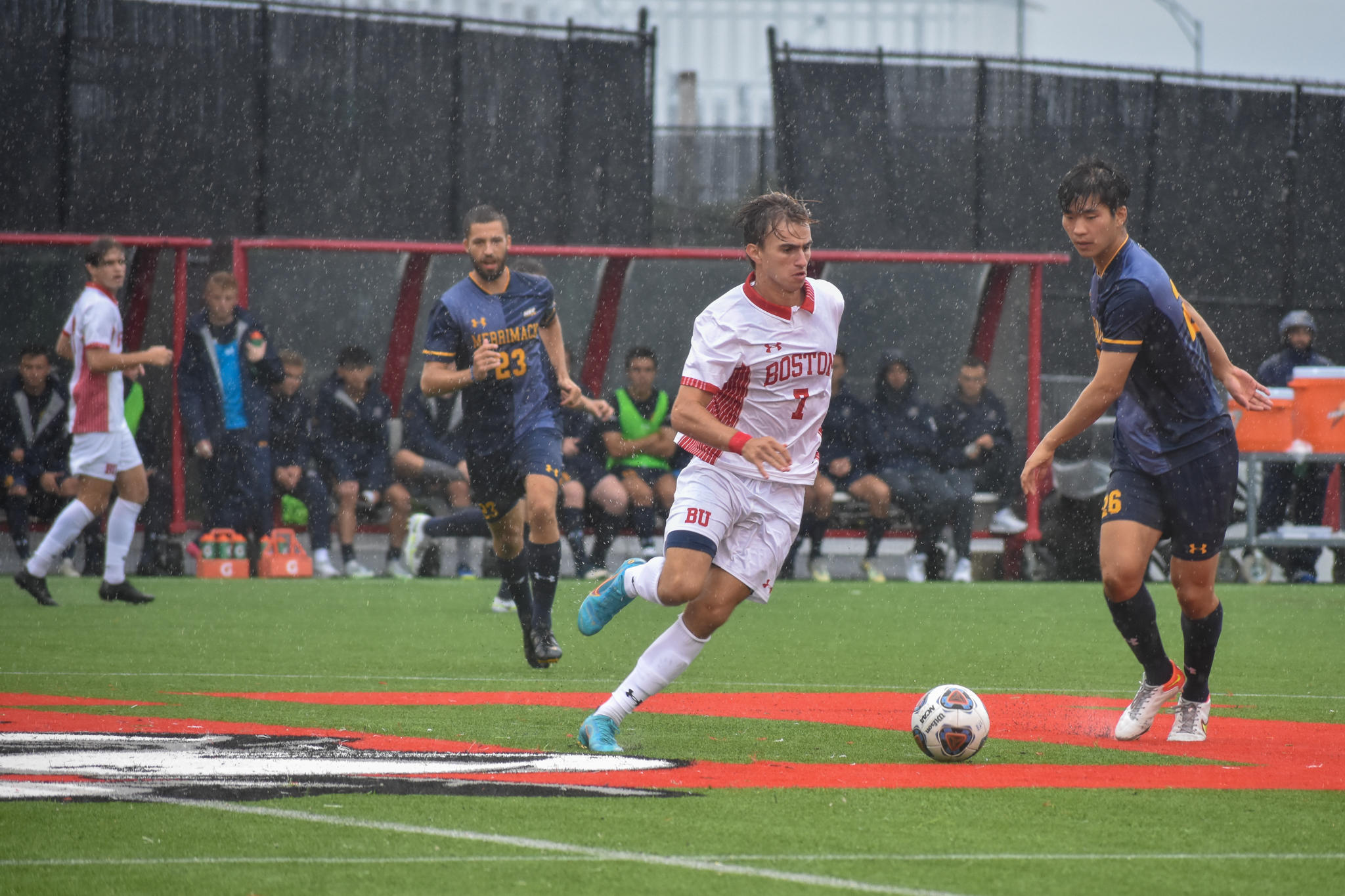 On a rainy Labor Day at Nickerson Field, Boston University (2-0-2) took on Merrimack College (1-3-0) in what was only the third ever meeting between the two teams. Unbeaten through their first three games of the season, the Terriers succeeded in extending it to four with a 1-0 win over the Warriors.

The shutout performance highlighted the improved defense BU has sported all season after struggling to keep opponents out of the goal last year. BU Head Coach Kevin Nylen attributed some of his team’s defensive success to a change in formation.

“We felt based upon our personnel that our three-back system was going to be good,” Nylen said. “We’ve limited other teams, we’ve given up two goals in four games, so I’m really pleased about that.”

Just six minutes into the game, forward Andrew Rent made a bursting run down the right flank and pulled it back for midfielder Colin Innes, who sat his defender down and finished with his left foot to give the Terriers a 1-0 lead.

“I thought Colin had one of his more complete games today,” Nylen said. “He’s grown up in terms of being (at BU) and has experience from his previous stop (at the University of Kentucky) and his youth career, and I think we are seeing that a little more coming into a second year with him.”

Throughout the season, the Terrier wingbacks have been key to their success going in attack. That continued on Monday with

Wingback Eitan Rosen created the chance for Innes to score, a direct product of the new system Nylen has implemented. The third-year coach said he wants his wingbacks to be the engines of attack.

“In this system, wingbacks have to be really industrious,” said Nylen. “You’d like to see [Rosen] have a little more quality in the final third, but to be fair to him I thought his delivery early on in the game was good.”

BU came out in the second half with a flurry of chances threatening the Merrimack goal. Senior defender Gianluca Arlotti was inches away from doubling BU’s lead in the 48th minute, but dragged his shot just wide.

While Merrimack’s clear-cut chances were kept to a minimum by the Terrier defense, there was still work for the Terriers’ goalkeeper Francesco Montali to do as he made a couple of crucial saves in the second half to keep BU in front.

The Terriers will look to continue their unbeaten run to start the season on Sept. 10 when they travel to Amherst to play the University of Massachusetts Minutemen at 1 p.m.