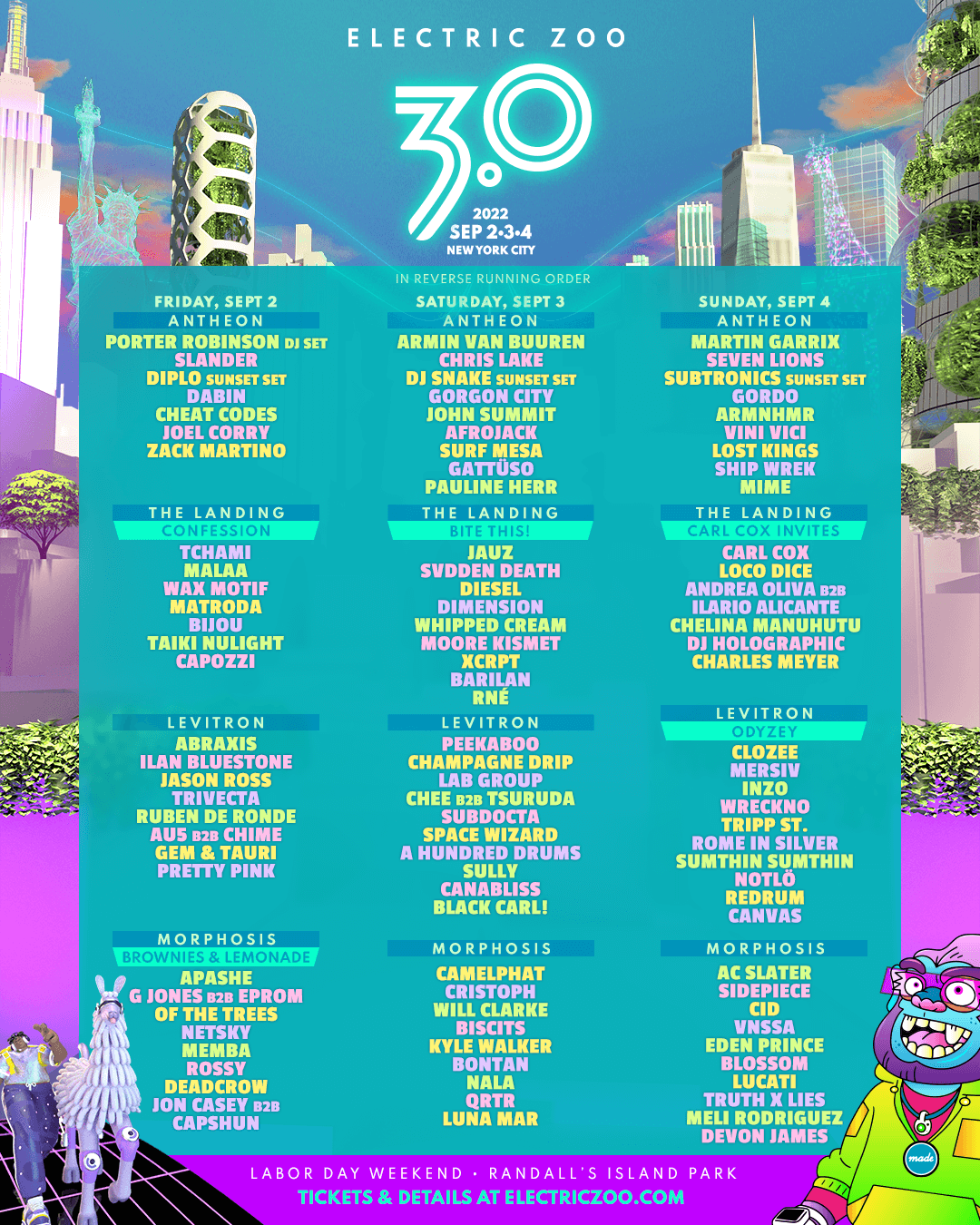 This coming Labor Day weekend, tens of thousands will congregate in Randall’s Island Park, New York City for Electric Zoo Festival 3.0 (or as some call it for short: EZoo). For its 13th year in a row, Electric Zoo Festival 3.0 will run from September 2nd to September 4th featuring top names in electronic music. Some performers this year include Porter Robinson, Cheat Codes, Black Carl, VNSSA, Ac Slater, G Jones B2B Eprom, Rossy, Apashe and more. Dubbed “the last dance of the summer”, EZoo passes are in high demand for a weekend jam-packed full of the most wild and atmospheric electronic music festivals of the year.

Electronic music fans will spend the weekend dancing at the specially-engineered AI Electric Zoo stages, including new stage designs Antheon, Morphosis, Levitron, and The Landing. These stages will feature an impressive lineup of artists for both the main set and the ensuing afterparties by Brownies & Lemonade, Subtronix, Afrojack, Martin Garrix, and others across the weekend.

Artists Tchaimi, Bite This!, CloZee, and Netsky will be curating their own stages throughout the weekend, putting together a one-of-a-kind sequence of performances and crazy party vibes. Carl Cox will be returning to Electric Zoo Festival after an eleven year hiatus with his own stage takeover on September 4th.

Electric Zoo Festival was established in 2009 by the company Made Event, bringing together the wide variety of electronic music’s many sub-genres at an internationally renowned festival. Electronic Zoo has also held festivals in Cancun, Mexico; Sao Paulo, Brazil; Tokyo, Japan; and Beijing, China.

This year’s iteration of Electric Zoo Festival is inspired by Web 3.0 and the immersive wonder of technological revolution, hence its name this year, ‘3.0’. With a cutting edge showcase of all things electronic, EZoo will also be showcasing mesmerizing tech-inspired light shows and a full-body environmental festival experience.

Electric Zoo in 2022 features new improvements to the festival experience, including sound bleed fixes, a reconfigured site map, more accessible water stations, new VIP areas, and lots more. Tickets and transportation to this year’s festival are still available for sale on Electric Zoo Festival’s website if you are interested in attending.