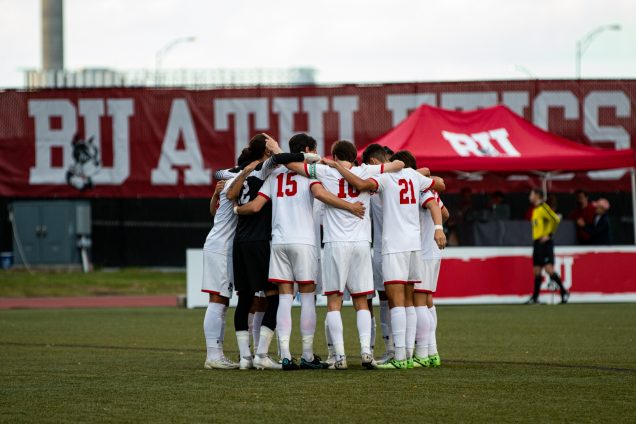 It was a forgettable first full season for Kevin Nylen as head coach of the Boston University men’s soccer team last year. Throughout the fall of 2021, his team only picked up four wins the entire season and never found themselves close to a playoff berth.

But after a season filled with forgettable performances and continual scoring troubles, Nylen will hope to put the struggles of last year behind him and bring the Terriers to winning ways in 2022. Going into the new season, Nylen said he looks back on the year prior and sees a lot of lessons that were learned.

The bulk of Nylen’s starters from last year return for the upcoming campaign, including many of his attackers. Nylen will rely on individuals like Brian Hernandez, Quinn Matulis and Eitan Rosen to take majority of the Terriers’ scoring burden.

Although BU scored a poor tally of ten goals in the Patriot League last season, Hernandez, Matulis and Rosen combined for eight of those ten and showed sparks of quality throughout the campaign.

Compared to their attacking output, the Terriers were more effective on the defensive side of the ball last year, ranking fifth in the Patriot League in goals allowed. However, Nylen will have to find the solution to bolster his backline after Daniel Rosario, who logged the most minutes in the squad last season, graduated in the spring.

Looking to fill the hole left by Rosario, Nylen brought in five defensive recruits — four of them freshmen. Nylen said he is “impressed” so far by all the new recruits, but also said they will still need to acclimate to the college game.

One position Nylen won’t have to worry about on his backline is at left back. Senior Gianluca Arlotti was by far the Terriers’ most consistent player last season playing on the left and he earned himself a spot on the Patriot League Preseason All-League team — making him the only Terrier to do so.

“[Arlotti] has continued to get better,” Nylen said. “He logged good minutes for us as a left back, and at times as a wing back, and we are hoping that will continue this year.”

On Thursday, Nylen and the Terriers will kick their season off at Albany. After failing to win any of their first five games of the season in 2021, the Terriers will hope to take a step in the right direction with a win in New York.

“We have to stay focused on the day to day and not get too carried away,” he said. “We’ve identified our bigger picture, but as a coach you can’t look beyond what’s right in front of you. My goal right now is to go out and have a good performance on Thursday night.”