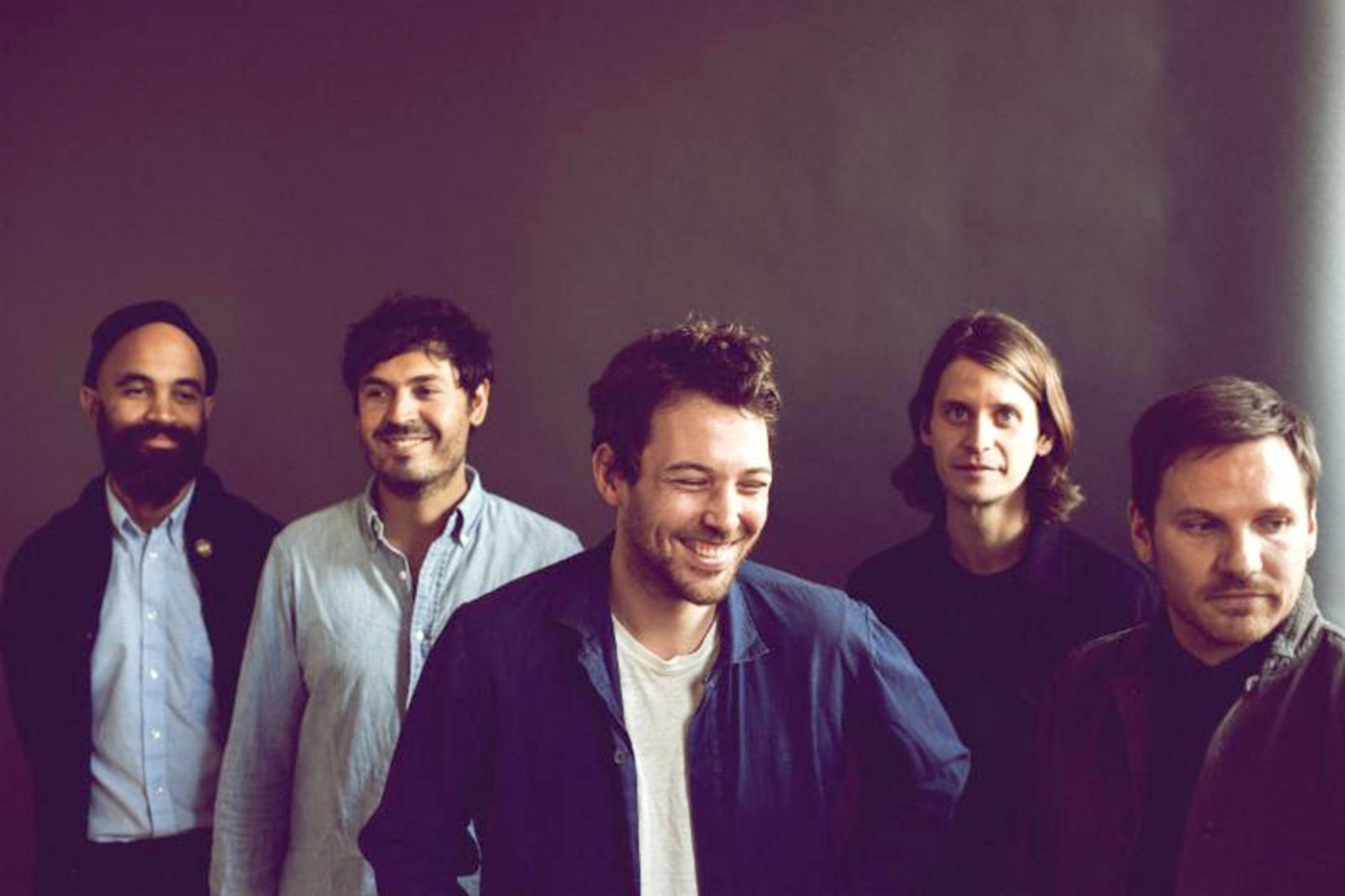 This past Wednesday, Bostonians gathered in the open air at Leader Bank Pavilion to see Fleet Foxes Shore Tour (a name jokingly parodied by frontman Robin Pecknold: “Shoah toah? Is that how they say it over here?”). The indie-folk band brought infectious energy and unmistakable honesty to their performance as well as their signature sound; rife with rich vocal harmony, unexpected modal chord progressions, and a fundamental sense of timelessness and existentialism. Through the night, the levity of Boston accent jokes and the like was combined with the primitive transcendence of music that Fleet Foxes fans know and love, creating an experience of deep humanity as we gathered on a weeknight to ponder the big questions and ultimately enjoy ourselves.

Before their opener/collaborator, singer-songwriter Uwade took the stage, Pecknold came out to let us know that the concert was going to be professionally filmed. His casual, conversational vibe really set the tone for the whole night. He’s not some lofty ‘artiste’; he’s just a guy excited to experience music with the rest of us. Before he left, Pecknold also sung his praises for Uwade, who then emerged with her guitar.

The crowd was instantly transfixed by Uwade after hearing her sticky tone. Even as she faced thousands alone, Uwade was the picture of comfort and ease. This demeanor also reflects in her music- lovely songs that shine with grace and reality. Many of us know her voice as the atmospheric throughline of Wading In Waist-High Water, the first track on Fleet Foxes most recent record, Shore, but in this performance I was made aware of her power, both vocally and as an artist prepared to document her world. I do wish she had utilized a drum set or maybe a rhythm guitar. There were moments when her music was dying to groove and it felt held back by the minimalist operation. Uwade finished her set with the catchy-yet-heartfelt Ginger Ale (my favorite song she played, though it does not seem to be released yet), and as she left the stage I felt grounded and ready for whatever was to come.

As the screen behind them opened up to the imagery of a graphic mountain, Fleet Foxes began with a back-to-back rendition of the first three tracks from Shore. Wading In Waist-High water (with the band joined by Uwade) was a beautiful introduction that faded into the beaming light of Sunblind. As the band reached the first chorus, the crowd shared in the first big release of the night, and I held back tears.

During Can I Believe You, I was able to pull back and start to notice the sights and sounds around me. On the stage stood Robin Pecknold (voice, guitar), Skyler Skjelset (guitar), Casey Wescott (piano, mandolin), Christian Wargo (bass, voice), and Morgan Henderson (tambourine, flute, saxophone, bass… as Pecknold said “[Henderson] never met an instrument he couldn’t master”). They were also joined by a brass trio, later introduced as the Westerlies. Pecknold’s voice, I noticed, was even more distinct live. His clear belt is a bit nasal, and I spent a few hours after the show trying to remember who it reminded me of (John Denver). If you’d like to see what I mean, go listen to A Very Lonely Solstice, a live recording of a Pecknold solo performance during Covid.

After this small set from Shore, the band dove into Ragged Wood, one of the highlights from their self-titled 2008 album, their first full length release. Running the gambit from quaint to intimate to jamming, this song illustrated the wide range of creativity and contrast that Fleet Foxes is capable of, even within a single song. What followed was a slow building rendition of Your Protector, complete with not one but two flutes, which eventually broke into unbelievably powerful harmonies as Wargo and Pecknold took to their mics to sing the lyrics “You run with the devil”!

After a few more songs, Pecknold counted off into Third of May / Ōdaigahara which, when it began, felt like a campfire sing along, but it soon devolved into chaos as everyone blared on their instruments and ink blots (or even blood?) filled the screen. The more twisted journeys of songs like this one from 2017’s Crack-Up provided knowing framing for the lighter ones that came between. In that vein, the band then played their hypnotic hit White Winter Hymnal, and then Phoenix, their easy-going collaboration with Big Red Machine (which, though it’s a great song, made me appreciate the uniqueness of a true Fleet Foxes record). These songs were once again juxtaposed; as the darker, more percussive Mearcstapa brought us back to Crack-Up, with Henderson shining in an off-kilter saxophone solo. And as if they knew the crowd was beginning to tire, Fleet Foxes finally brought it back to the campfire with Mykonos: an opportunity to scream along and revel at the stunning a-cappella harmonies of Wargo, Pecknold, and the whole crew.

Then it was, as Pecknold put it, “time for me to play a few sad songs”. Standing by himself with his guitar (and a steaming thermos of tea), Pecknold let us into his world of poetry set to chords. One of the many special moments included Blue Spotted Tail, (one of my favorite teenaged cry-alongs) in which time seemed to stop as you could feel the audience hanging on to every word. Another was Pecknold’s cover of The Kiss by Judee Sill – one of his biggest inspirations, he told the crowd.

When the full band came back to the stage, you could tell they were building to something, and in turn elevated in instrumentation and sound. After a quick “Happy Birthday” led by the Westerlies, Skjelset started bowing the guitar for Drops in the River, which added to the characteristic quasi-medieval feel of early Fleet Foxes. In Blue Ridge Mountains, Henderson finally picked up the acoustic bass that I had been eyeing in anticipation all night, and thankfully, it was mixed loud enough to go straight into your soul, in the way that bass at a concert should. Grown Ocean brought the energy to an optimistic high before the band left the stage.

The encore set was a lengthy one (as Pecknold let us know, this was probably their longest concert ever!). But it was worth it, for the amount of hits that were yet to be played. Pecknold brought us a heavier, poignant Tiger Mountain Peasant Song, and another cover: Morning of My Life by The Bee Gees (fitting, for all the references to time of day in the Fleet Foxes discography). Thankfully, they also continued to explore songs from 2011’s Helplessness Blues – reaching an emotional high with The Shrine / An Argument and finally closing the concert with the title track; fan favorite Helplessness Blues (One lyric change of note – Pecknold sang “Or I could wait tables…” rather than the recorded “And you would wait tables…”. I wonder what happened to “You”?).

As though to provoke a new mood, the visuals for the encore took a steep turn from the nature imagery that preceded. Instead of marsh plants, there were jarring colors and patterns on the screen, and at the very end, a colorful portal that zoomed in and then closed – returning to the graphic mountain at the very beginning of the concert. This otherworldly imagery worked with the innate folkiness of the music and the existential themes of the lyrics, perhaps making a stance on the thesis of the night: something about finding transcendence and meaning in the fundamental and tangible – whether it be through an age old harmony, a good laugh, the time of day, or the act connecting with others through music – at the campfire and beyond.