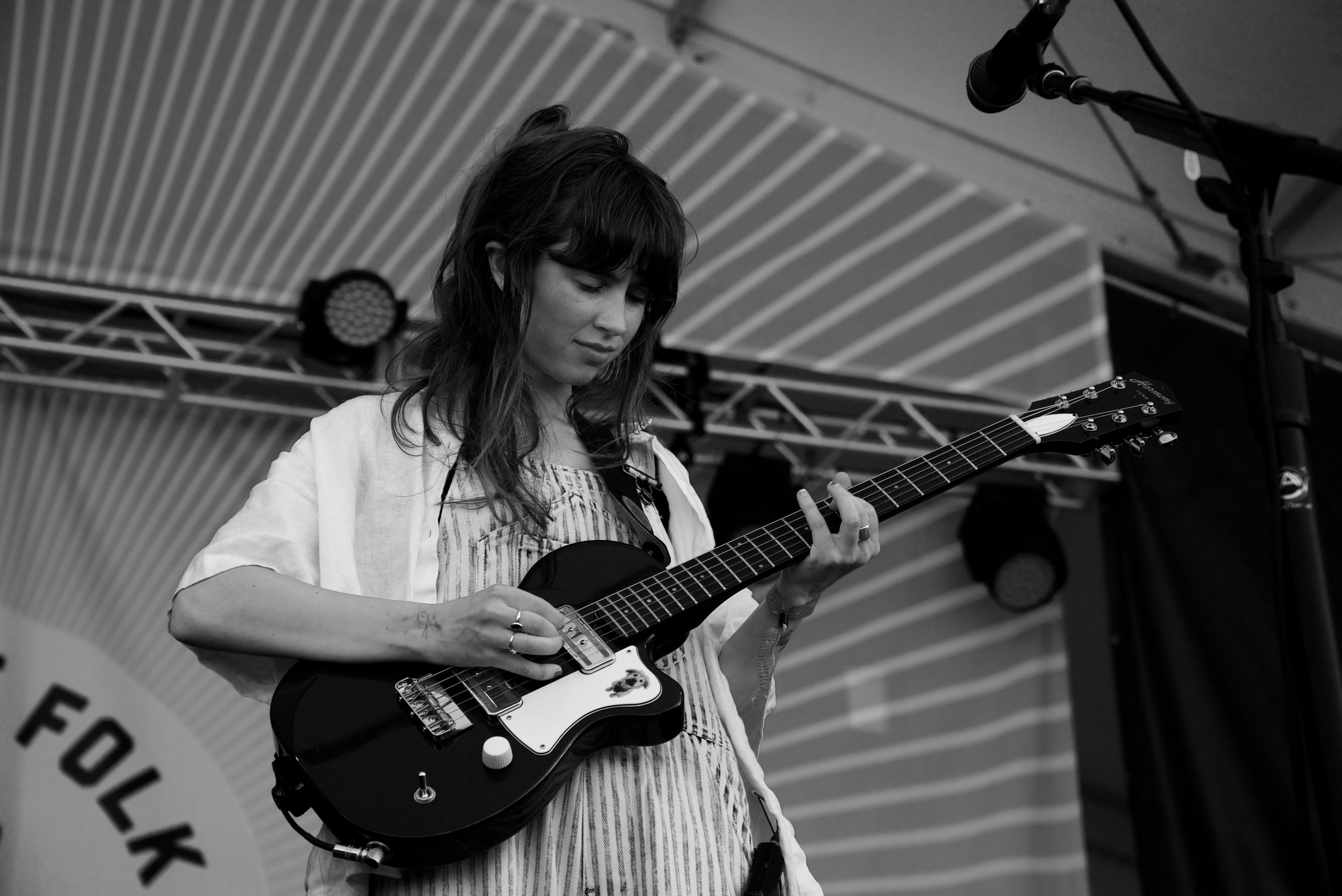 Photography and review by Maya Santow

On the weekend of July 23rd, thousands of folk music lovers from around the globe headed to Fort Adams State Park in Newport, Rhode Island for the 2022 Newport Folk Festival. With beach chairs strapped to their backs and Del’s Lemonade in-hand, attendees— jokingly referred to as “Folkers”— braved the sweltering 90-plus degree heat for an impressive lineup, complete with big-name surprise guests like Paul Simon and Joni Mitchell. Regarded as a sacred space for artists and concertgoers alike, Newport Folk Fest offers not only a wide variety of musical acts, but also several local vendors, family activities, and a sense of community— all set in front of the backdrop of quintessentially Rhode Island sailboats at Brenton Cove. A Rhode Islander myself, I was ecstatic to have had the opportunity to photograph several of the artists who graced the Quad and Fort Stages on Saturday.

This was the Icelandic singer-songwriter’s very first Folk Fest, but her captivating performance quickly established a sense of belonging at the festival; Margret’s soft, lilting vocals paired with gentle acoustic guitar seemed to find their home with the Quad Stage audience, who were rapt with attention despite the chaos of surrounding vendors and anticipation for the day ahead.

The folk duo, composed of Martin Earley and Calin Peters, was the first to kick off the Fort Stage lineup for the day. They brought a fun, energetic, and dynamic performance, with Peters swapping out her bass for a cello for a few songs. I was only able to catch the first couple of songs, but their onstage chemistry is incredibly apparent and endearing from the start— even concertgoers in the blazing hot sun at the back of the crowd couldn’t resist getting up from their beach chairs to dance. The soon-to-be-married couple’s mix of contemplative, dark lyrics and warm, lighthearted  sound made for a perfect blend to start off the day on the main Folk stage. 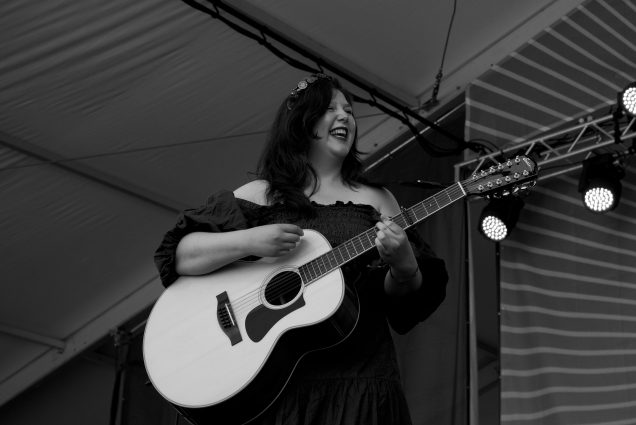 The indie rock singer, decked out in the royal blue color of her third album, Home Video (2021), took to the Fort Stage to deliver a stunning vocal performance, complete with a cover of Cher’s “Believe” and an acoustic version of her own “Partner In Crime,” both recently released as Spotify Singles. Early on in the set, Dacus and bass player Dominic Angelella joined in a mini guitar battle of sorts, playfully feeding off of one anothers’ energy.

From her softer (albeit lyrically gut-wrenching)  acoustic songs, to the more angsty head-bangers, to the all-encompassing build of “Night Shift,” Dacus packed an incredible amount of range into her set. Dacus’ unique, fluid timbre, poetic lyricism, and rock-leaning accompaniment created a strong, assured presence on the Fort Stage. 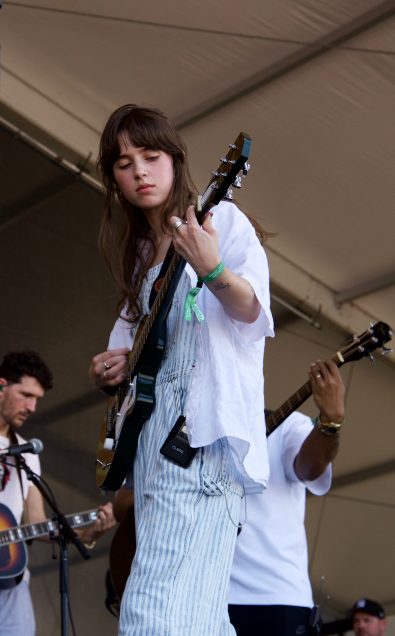 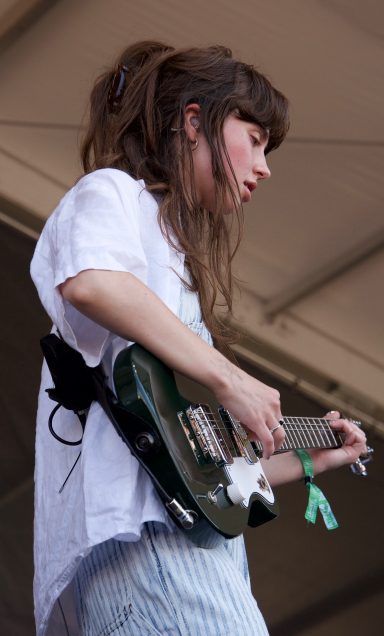 Indie artist Claire Cottrill, or Clairo, performed a collection of songs from her albums Immunity (2019) and Sling (2021). Cottrill’s signature silky vocal quality and introspective, wistful lyrics were peppered with catchy guitar riffs and tied together by her sense of ease and familiarity on the Fort Stage. Scattered throughout her set were references to her dog, Joanie (named after Joni Mitchell, and a photo of whom can be seen on Cottrill’s guitar), including a live arrangement of instrumental track “Joanie,” made more funky and danceable by bassist Hayley Briasco.

This was not Cottrill’s first year on the Newport Folk stage— in 2015, while babysitting the daughter of The Decemberists’ Chris Funk, a teenaged, overalls-wearing Cottrill joined the band onstage for a song. Dressed in a similar pair of overalls this year, Cottrill invited Funk, his now teenaged daughter, and Bleachers’ Jack Antonoff (who produced Sling) onstage to join her for the performance of her hit track “Sofia,” gleefully encouraging them all to dance with her. Throughout the jubilant full-circle moment that was Clairo’s Newport Folk performance, Cottrill’s own enjoyment and passion onstage was infectious. 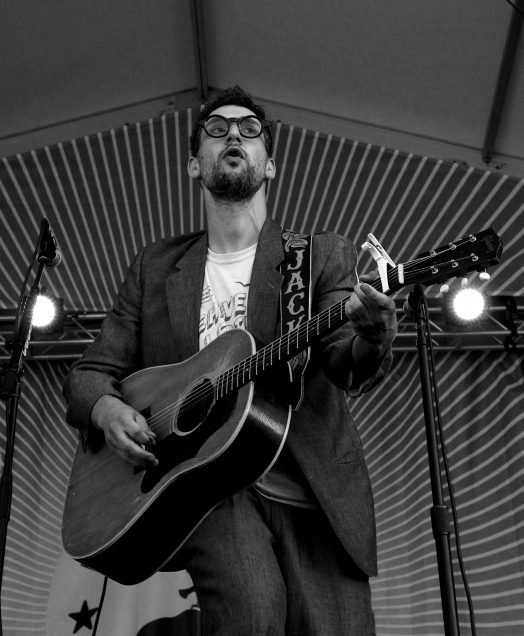 After joining Clairo, Jack Antonoff returned to the Fort Stage to perform with keyboardist Mikey Freedom Hart and saxophonists Zem Audu & Evan Smith as alt-rock band Bleachers. Quite the witty performer, Antonoff at one point lightly teased Smith, challenging him to hit the highest note that he possibly could on the saxophone— a task that Smith took in stride.

In contrast, the incredibly raw and real lyricism in Antonoff’s performance served as a reminder of what has made him such a successful performer and producer, further proven by the adoring (and deafening) screams that came from behind the audience barricade. Antonoff later invited Clairo and Lucy Dacus back onstage for a cover of The National’s “Bloodbuzz Ohio,” in which the trio’s voices swirled together in a brief, but beautifully culminating moment.

There is no other musical experience out there that is quite like Newport Folk— although artists and attendees come from all over, there is an unmistakeable sense of home and community that can be seen in the pure joy, ease, and wonder of Folk Fest’s music lovers both onstage and off. A tangible connectedness can be felt between the artists and the audience that, in my experience as an avid concertgoer, is incredibly rare— at least in the raw and authentic form that it took in Newport this weekend. From the veteran headliners on the lineup, to new discoveries, there is truly something  for everyone in the “Folker” community, with music that is absolutely well worth enduring the late July heat. I would certainly implore anyone to experience the pure magic that occurs at Fort Adams each summer, if you are lucky enough to have the opportunity.