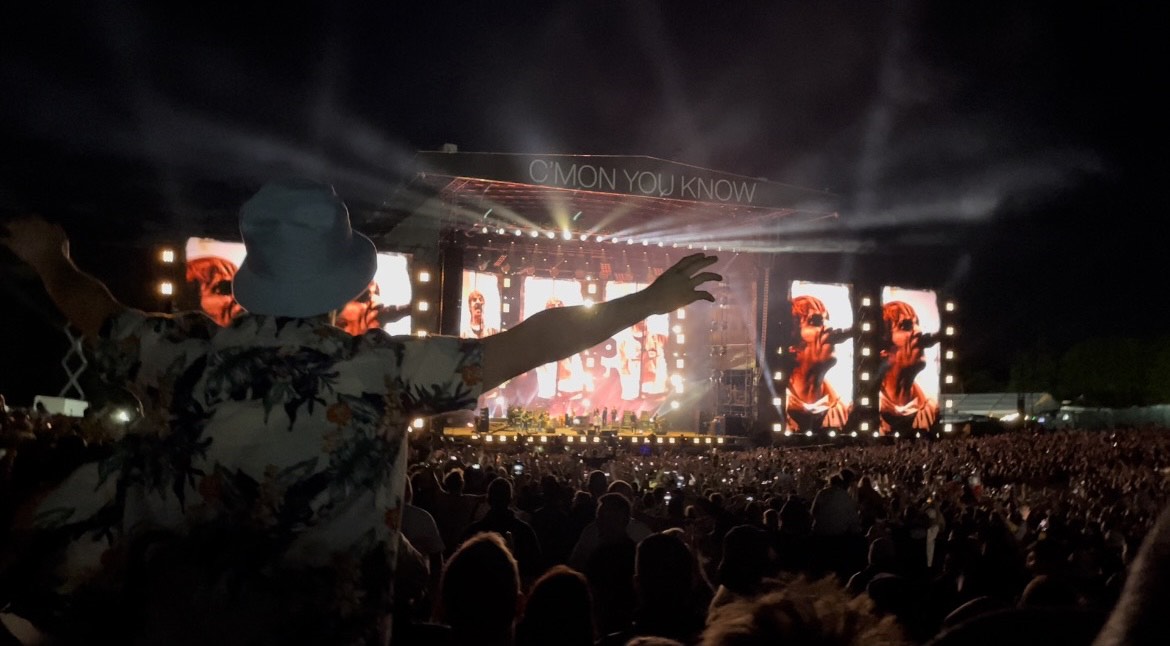 Review and photo by Josephine Best

In 1996, Oasis reached the height of their fame playing the cherished grounds of Knebworth park. The band played two nights and sold over 250,000 tickets, however, that was only a small fraction of the demand for tickets which was estimated at over 2.5 million. “The largest ever demand for concert tickets in British history,” according to the BBC.

On June 3rd and 4th of 2022, Oasis frontman Liam Gallagher returned to the stage to play two more ear drum searing nights, waking sleeping Oasis fans throughout the UK as well as their children.

He didn’t come alone. He brought Pastel, Amyl and the Sniffers, Paolo Nutini, and Kasabian the first night and Goat Girl, Fat White Family, Michael Kiwanuka, and Kasabian for the second night.

My friend and I got tickets for the first night, June 3rd. Alongside 80,000 other raging fans we whacked into the park to experience it all before tabloids got a hint of the scene.

We found ourselves surrounded by a swarm of concertgoers as we headed to the park. The designated trail from Stevenage to Knebworth was still flooding six hours after the park gates opened. The garbage bins had been overtaken by those who aimed to avoid the alcohol prices at “Liam’s Bar: The Biggest Concert Bar on the Planet,” with bottles inhabiting a five-foot radius of the bin.

When we reached the 250 acre plot of Knebworth Park the enormity of it all hit us, and we couldn’t even see the crowd yet. The field stretched for about half a mile before we reached the entry point, which spat us into another dimension. One filled with parkas, bucket hats, Adidas, and Manchester City gear, as is the uniform for a Liam Gallagher event.

We continued our journey to the heart of the park, which finally came into view after passing a fence being used by 40 lads as a restroom. We had to hold tight to one another to make our way through the crowd. Finally, standing at the top of the hill, we could digest our surroundings. Behind us was a looming Ferris wheel, and in front of us was the depths of the crowd. A hue of red revealed the most avid fans. Those who adorned a bright sunburn on their face signified their time in the park.

With our three hours to spare before Liam’s set, we spent our time fueling, grabbing food from a quintessentially British food truck named “Teas and Toasties.” It was there we surprised the cashier with our American accents. He was the first of many that night to ask, “why are you here?” Which most said kindly and with confusion in their voice. They found it hard to believe that two girls from America had even heard of Liam Gallagher, let alone traveled thousands of miles to see him perform.

However, we had something which tied us to the rest of the attendees. A clear commonality that hung over the extensive venue, a love of Britain’s National Treasure Mr Liam Gallagher.

The most explicit demonstration of this collective love happened during Kasabian’s set. They were the last to perform before Liam, and in the middle of their most notorious song, ‘Clubfoot,’ the crowd’s attention was lost when a helicopter came into view. Their chants quickly changed from the lyrics, “TELL YOU I WANT YOU”  to “LIAM LIAM LIAM.” Even the Kasabian frontman Tom Meighan admitted that he couldn’t get tickets to the historic festival and so he played it instead.

Kasabian left the stage shortly after and the drifters who hung around the bar and food began to make their way to the hotbed of the park. Spaces tightened as people maneuvered their way closer to the stage.

We had a decent spot. Had we gone any further, we would have lost the advantage of the hill which gave us the height to see the stage. While waiting in anticipation, the man next to me politely informed us that we might want to move. The reason being, that he was going to “take a piss in this cup” and we probably wanted to move away from that, proving that the crowd at Knebworth was not lacking in manners.

Finally settled in our new spot, we discovered a great source of entertainment. A group of boys in front of us, clad in bucket hats and trackie tops, were using the edge of their eyeglasses to scoop coke to snuff. Unfortunately, about thirty seconds after this, our heads were whipped back around to the sound of some poor boy retching after his body rejected his previous actions. Quickly, this group of “lads” turned from unruly to motherly caretakers of their friend, consoling him and rubbing his back while his body expunged his intestines.

Once again, we decided it best to move. As we got settled in our last spot of the evening, the stage lit up with random words. To the average civilian eye, these words were nonsense, but a Liam fan knows that they were the introduction to his set and the reiteration of his Twitter bio.

To the tune of Oasis’ ‘F***** In The Bushes’ and projected on the backdrop of Liam Gallagher concert photos, each adjective took a turn lighting up the screen.

With the addition of the words “C’MON YOU KNOW” and “KNEBWORTH.” Which signified the end of the stream of words and the beginning of the set.

Finally, sheathed in a white parka, Liam Gallagher sauntered onto the stage, tambourine in hand. Chants of “LIAM” reverberated across the crowd until he muzzled us by playing Oasis’ ‘Hello.’ Although, muzzled is hardly the word as every attendee was singing along, as loud as they could manage.

His voice shot through the park like a Vodka-Redbull. People became drunk from the sound of his voice and caffeinated from the energy of the crowd. As soon as his set began, arms went over shoulders. Groups of strangers started hugging each other and swaying to the sound of ‘Stand By Me.’ Unity masked the congregation, and nothing existed outside of Knebworth Park.

Before the first encore of the evening, of which there were two, Liam paid homage to the new generation of music by bringing out his youngest son, Gene Gallagher to play the drums for ‘The River.’ Gene held his own on such a daunting stage, playing to a rabid crowd. Shots of him playing were projected on the colossal screen, confirming him a direct clone of Liam. He could have convinced the crowd it was 1996 if he took to the stage in his father’s parka.

A mix of solo and Oasis songs were chanted by the heaving crowd with a noticeable return to intensity when Oasis songs were performed. Though the classics like ‘Supersonic’ and ‘Live Forever’ were played, the night reached its peak during the first encore when ‘Wonderwall’ was played. Not a single soul held their breath during the chorus. The purity of 80,000 people singing “and after all, you’re my Wonderwall” infected minds in a way that can’t be cured.

After the first encore, Liam treated the now subdued crowd to a shot of adrenaline when he brought out The Stone Roses’ guitarist John Squire to play the last song of the evening ‘Champagne Supernova’ just as he had done when he came on the same stage with Oasis 26 years before. The park was filled with the howls of shocked congregants who had chanted The Stone Roses’ ‘I am the Resurrection’ just two hours prior. Now he was being heard live, giving new life to an iconic song.

As Squire struck the final chords of ‘Champagne Supernova’ an array of golden fireworks lit up the sky and Liam took to the mic to say, “Thank you. Goodnight. Take care of yourself. Nice one. Goodnight Knebworth.” He took a step back from the microphone to look at the now swarming crowd. Knebworth may have changed since he beheld that same field 26 years ago, but 80,000 people proved that the spirit of Oasis never really left.