On Monday, May 2, I signed off for the last WTBU Sports radio show of my Boston University career. Two weeks later on Saturday, May 14, I signed off on my final live game broadcast with WTBU Sports, as Lehigh beat BU twice to end the Terriers’ three-year reign as Patriot League softball champions.

I distinctly remember back in September, 2018, when I walked into that studio on the third floor of COM for the first time. I had never done a live radio show before. I didn’t know it was possible to be like the guys on WFAN in New York or WEEI in Boston, just sitting in front of a microphone and talking about sports.

I did not open my mouth once on that show. I was so nervous and overwhelmed, and literally could not put two words together. I walked right up to our co-directors from that year, Matt Doherty and Andrew Mason, and apologized for having nothing to contribute to the show.

I can also still remember feeling the same way when doing my first on-air broadcast that October, an exhibition between BU Men’s Hockey and the Acadia University Axemen. It went just about the same.

I had zero broadcasting experience from high school, and didn’t know as much about hockey as I needed to. I labored through it just like I did with that first radio show. Thankfully, my partner. Brian Lombardo got me through it and it ended up being a lot more fun then nerve-wracking by the end.

My oh my, how things changed from then. It didn’t take long for me to get acclimated to putting on a headset or sitting in front of a microphone and developing my passion for talking about sports however possible. I kept coming back to every single Monday and Friday radio show of my freshman year and kept talking baseball, football, BU sports and whatever else was on people’s minds. I kept trying to learn about hockey and basketball to get more chances to call those games. I knew that despite how bad I was at doing these things as a freshman, I loved it and wanted to get better.

Over the course of my freshman year, I got to witness some pretty awesome BU sports moments either broadcasting them, writing about them or just watching them. None were bigger that year than BU Women’s Hockey winning their first Beanpot title since 1981. In my first two years at BU, the women’s hockey team was as loaded as ever with the likes of Jesse Compher, Sammy Davis, Reagan Rust, Abby Cook, Corrine Schroeder and more leading the way all over the ice. There are so many more memorable or talented players from those teams, but to list them would take up the whole story. When Davis scored the game-winning goal, and there was nothing but pure jubilation, I got my first taste of BU winning.

The same feeling came back a few months later when BU Softball hoisted what would be its second of three straight Patriot League titles. Watching the leaders of that team, like Alex Heinen and Madi Killebrew, hit home runs in BU’s win were two amazing moments to actually be on the call for. All of that coming in just one year, I couldn’t wait to see what the next three years had in store.

During my sophomore year, the women’s hockey team remained as loaded as it was the previous year. At the same time, the men’s hockey team brought in a great group of freshmen, led by the seventh overall pick, Trevor Zegras, and both of BU’s basketball teams had great talent coming in to surround the players that were already there. Then for me, softball bringing in more new talent with two straight Patriot League titles in their back pockets was the cherry on top.

While I didn’t get to cover the men’s basketball team’s road to a Patriot League championship over Colgate and trip to the NCAA tournament as closely as I wanted to, that was more than made up for by the opportunity to head to TD Garden to call the 68th Beanpot championship Game. BU had not brought home a Beanpot since 2015, and they were riding all the momentum after taking down arch-rival Boston College in double-overtime in the first round of the tournament. They were facing the Northeastern University Huskies, the reigning champions of the tournament, who beat BU in the semifinals during my freshman year.

Aside from the fact that it was an epic game that also went into double-overtime, for better or worse that game produced the most “memorable“ moment of my WTBU Sports career. Zegras tied the game at 4-4 with one second left on the clock. Having already greatly lost my voice throughout the night, I decided to preemptively avoid the voice crack by doing the Zegras goal call in full falsetto. While that clip on our WTBU Sports YouTube channel certainly gained traction as soon as it got uploaded, Zegras’ recent success and BU facing Northeastern again it in the Beanpot led to that video booming to over 100,000 views. That isn’t exactly the clip of mine that I would want to reach that many views, but hey, virality is virality.

Unfortunately, BU lost that game after a controversial penalty led to a Jordan Harris goal for Northeastern to give them the 5-4 win. On top of that, little did I or anyone know that that would be just about the last big sports moment we would get to witness live.

Four weeks later, when men’s basketball won their championship and a trip to March Madness, COVID-19 shut down the entire world. Seemingly in an instant, we were all sheltering in our homes with no idea of when we would get to go back to school, see friends again, and get back to doing the work we love.

For the next year and a half, everything from the few game broadcasts we had to the radio show was recorded virtually on Zoom. It certainly made the heated debates of the radio show feel a lot colder, and calling games was basically impossible.

Fortunately in the fall of 2020, the radio show got to be back together in person, and I had the opportunity to work with my co-host Chad Jones all year long. Chad helped me become a much more relaxed host in the studio, and together we developed the ability to talk about sports for two hours, random non-sports issues for two hours or some combination of the two. Given that all of last year, we still could not call BU games in person, those four hours a week doing an in-person show with Chad were the highlights of my junior year with WTBU Sports.

That brings things up to this year. Not only did the radio show go back to a studio full of 4-6 people per night, but game broadcasts could go on in person again, and life at BU seemed so much closer to normal again. Talking all things sports on the radio show with so many people in the studio that we would always overlap and interrupt each other was an experience that almost seemed foreign, given that it hadn’t happened in almost two years, but it made the radio show feel alive again and back in its prime.

And how can I not talk about the places I got to go this year to call BU Men’s Hockey games? Whether it be TD Garden, Madison Square Garden, or traveling to other schools’ arenas to call games, the men’s hockey team became my broadcast beat for my senior year.

From Red Hot Hockey against Cornell at MSG, to getting my Beanpot redemption on the calls as BU beat Harvard and Northeastern to finally win its 31st title, covering this team with WTBU Sports gave me chances to call games in buildings I hope I’ll be back in doing the same work again one day down the road.

All of those radio shows, game broadcasts and stories written are in the record books, and it all brings me back to Saturday closing out my final WTBU Sports event with BU‘s softball championship losses. The broadcasts were among the best I’ve had all year, which certainly helped relieve the negativity of the losses, and also made me feel elated that two of my best game broadcasts happened to be my last two as a BU student.

As I receive my degree and leave Boston University for the last time as a student this coming weekend, all I can say to WTBU Sports and everyone I have worked with over these last four years is thank you. The three things I will forever remember from working alongside everyone here are the learning experiences with radio and broadcasting, the friendships I made that I hope will continue on as I leave BU, and the memories of being at games, calling games, and just watching and talking about sports.

I tried to cherish it all, I am definitely grateful for it all, and I will greatly miss it all. 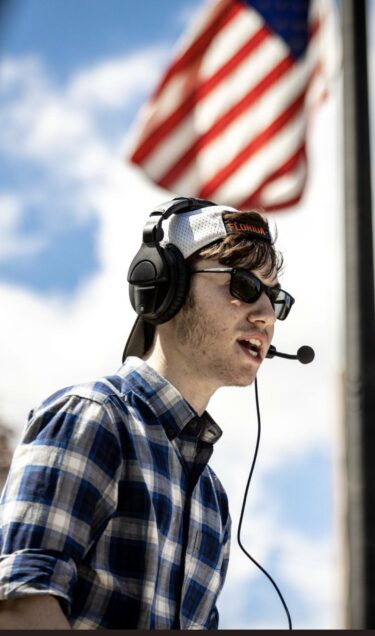