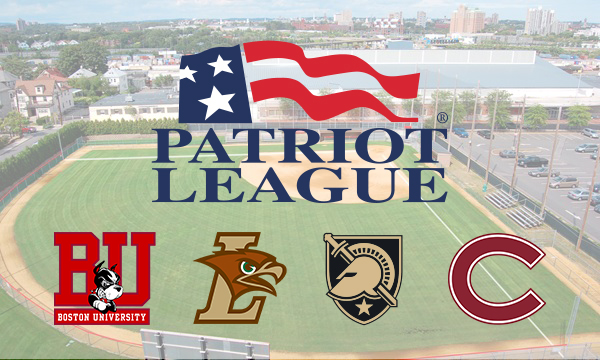 The Patriot League softball playoffs begin Thursday, with an opening-round matchup between No. 1 Boston University and No. 4 Colgate penciled in to kick off the tournament. No. 2. Lehigh will also face No. 3 Army to close out the first day of competition.

Much of the regular season was a case of the haves and the have-nots, with BU and Lehigh setting themselves apart as the clear teams to beat early on. The only teams to get close were fellow tournament teams Army and Colgate, but they still ended the season with conference records around .500 and overall records far below that.

While it’s hard to imagine someone other than Lehigh or BU coming away with the championship title, the Patriot League tournament’s double-elimination format could pose a challenge to any team that happens to have an off day — and neither the Terriers nor Mountain Hawks are above that.

The tournament schedule is arranged as follows, per the Patriot League:

Here’s the breakdown of each team’s regular season performance and how that could translate to the playoffs:

The Terriers came away with the No. 1 seed for the fourth year in a row after remaining undefeated in conference play until the final weekend of the season. As a result, they also enjoy tournament hosting rights — a major benefit considering their 14-2 home record.

After navigating through arguably the most difficult non-conference schedule in the Patriot League — which included matchups against teams such as Georgia, SDSU and Clemson — and adjusting to the loss of their top-line starting pitcher from the past few years, the Terriers cruised against conference opponents.

A major reason for that was strong starting pitching by juniors Allison Boaz and Lizzy Avery. BU pitchers combined to post a 2.11 ERA and allow just 48 hits for extra bases, 20 fewer than any other team in the conference. Another big reason was the Terriers’ top-ranked offense and defense; BU batted .352 and committed just nine errors against conference opponents. It didn’t hurt having Patriot League Player of the Year Kayla Roncin on the roster either, as the sophomore batted nearly .500 in conference.

It’s hard to identify much of a flaw within the BU powerhouse, but if there are any issues, they showed in the Terriers’ two losses against Lehigh to close out the season. For one thing, they’re just as susceptible to a strong opposing pitching performance — such as those they faced by Lehigh’s Gabriella Nori or Army’s Jolie Duong — as anyone else. For another, Avery is equally susceptible to the long-ball; she allowed 14 homers on the season, third-most of all pitchers in the conference, and gave up multi-run homers in both Lehigh losses.

For that reason, Avery is BU’s make-or-break player. She’ll need to avoid giving up the big hit if she gets into a jam, but if she does, it’s hard to imagine anyone eking through the Terriers’ defenses.

Where do the Terriers go from here?

With a win, BU advances to face the winner of the Lehigh-Army opening-round matchup. A win in that game puts the Terriers in Saturday’s 12 p.m. title game, while a loss gives them a second matchup on Friday against one of the teams that lost on Thursday.

With a loss, BU faces the loser of Lehigh-Army on Friday. A win in that game would advance the Terriers, while a defeat would eliminate them from the tournament.

A solid outing from Katelyn Young and 5 RBIs from Jaelynn Chesson give Lehigh the series-clinching win at BU.

Back to Boston for the PLT beginning Thursday. pic.twitter.com/I3ZsecmixA

If anyone is going to play spoiler to BU’s championship run, it’s certainly Lehigh. The Mountain Hawks were the only opponent to defeat BU in conference play or win a multiple-game series against the Terriers. That Lehigh did so on the final weekend of the season heading into the playoffs is an even bigger red flag for anyone putting their money on BU for the title.

Like BU, Lehigh poses a threat on both offense and defense, ranking second in hitting and fielding behind the Terriers. Yet, the Mountain Hawks haven’t been able to consistently match the Terriers’ success in the circle, which presents a potential flaw for opponents to exploit. Starting pitcher Gabriella Nori was strong in one game against BU in which she threw a scoreless shutout, but also picked up losses against Army and Colgate. Pitcher Katelyn Young has been similarly scattered with losses and wins against the three other tournament teams.

Without the reliable pitching that BU and Army can offer, Lehigh finds itself more reliant on its offense than perhaps any other tournament team. A player particularly important to the fate of the Mountain Hawks’ season is outfielder Jaelynn Chesson, the team’s top power hitter. Chesson can come up with the big hits that lead to wins and MVP awards, but has also shown the offensive streakiness that can accompany a focus on hitting for power. However, if the Mountain Hawks’ second win against BU showed anything, it’s that opponents don’t want Chesson as the next batter up in a runners-on situation.

Where do the Mountain Hawks go from here?

With a win, Lehigh buys itself a matchup with the winner of BU-Colgate on Saturday. A win in that game puts the Mountain Hawks in the title contest, while a loss requires them to play a second Saturday game in hopes of earning a title-game berth.

With a loss, the Mountain Hawks must face the loser of BU-Colgate. A loss in that game would eliminate them from the tournament, while a win still gives them a chance at the title game.

That is a pretty good way to start the weekend 😎

Army has proven itself to be a high-ceiling, low-floor team throughout an up-and-down season. While the Black Knights recorded some bad losses to Holy Cross in April, they also managed to challenge BU for the first time in conference play — pushing the then-undefeated Terriers to extra innings in two games — and handed Lehigh its largest loss of the conference season.

If Army wins it all, it will be due at least in part to starting pitcher Julie Duong’s contributions on both sides of the ball, making her a natural MVP pick. Duong started all three of those games against BU and Lehigh and finished the regular season with a 2.71 ERA, fourth-best in the conference. She’s also a solid hitter at the plate, where she averaged .263 in 99 at-bats.

The Black Knights’ make-or-break player is first baseman Leila Hurst, who was one of Army’s strongest hitters but who was also prone to strikeouts and fielding errors. At her best, Hurst batted .300 and knocked in a team-leading 30 RBI. Yet, she also recorded 25 strikeouts, second-most on the team, and 14 errors. If Hurst is on and Army’s All-PL first-team honorees Kayla Edwards and Maddie Wilkes produce as usual, Army could pose quite a challenge to any opponent.

Where do the Black Knights go from here?

A win against Lehigh pits Army against the winner of BU-Colgate. Another win gives Army an automatic title-game berth, while a loss requires them to play another game on Saturday for a shot at the title matchup.

A loss puts the Black Knights in the losers’ matchup on Saturday. A loss there eliminates them from the tournament, while a win leads to a shot at Sunday’s championship game.

WALK-OFF WINNER! Is there anything Jillian Herbst can't do!?

Herbst scores Claire Whalen on an RBI single in the bottom of the ninth and Colgate beats Army, 2-1! #GoGate pic.twitter.com/HMembyekkf

Colgate comes into the tournament as the clear underdog, with only two wins against the other three teams — both of which were close and one of which required extra innings — and a number of ugly losses. The Raiders’ three conference series wins all came against the Patriot League’s bottom three teams.

That said, the Raiders’ middle-of-the-line campaign was highlighted by a standout performance from freshman second baseman Jillian Herbst. The Rookie-of-the-Year honoree led the team with a .371 batting average, fifth-best in the league, and nearly every other offensive category. Herbst’s importance to the Colgate offense makes her both the obvious choice for a Tournament MVP prediction and a make-or-break player for the Raiders.

However, starting pitcher Bailey Misken has arguably even more potential to alter the outcome of Colgate’s season. Misken finished with a 2.84 ERA, nearly two points lower than the Raiders’ next best pitcher. She’ll need to keep up with and perhaps surpass those numbers in the tournament considering that no Colgate batter other than Herbst is hitting higher than .262, making ample run support seem unlikely.

Where do the Raiders go from here?

Colgate must defeat BU to advance to face the winner of Lehigh-Army. A subsequent win against Lehigh or Army would put the Raiders in the title game.

If Colgate loses to BU, the Raiders will rendezvous with the loser of Lehigh-Army. Another loss eliminates them from the tournament, while a win gives them a chance at the title game.