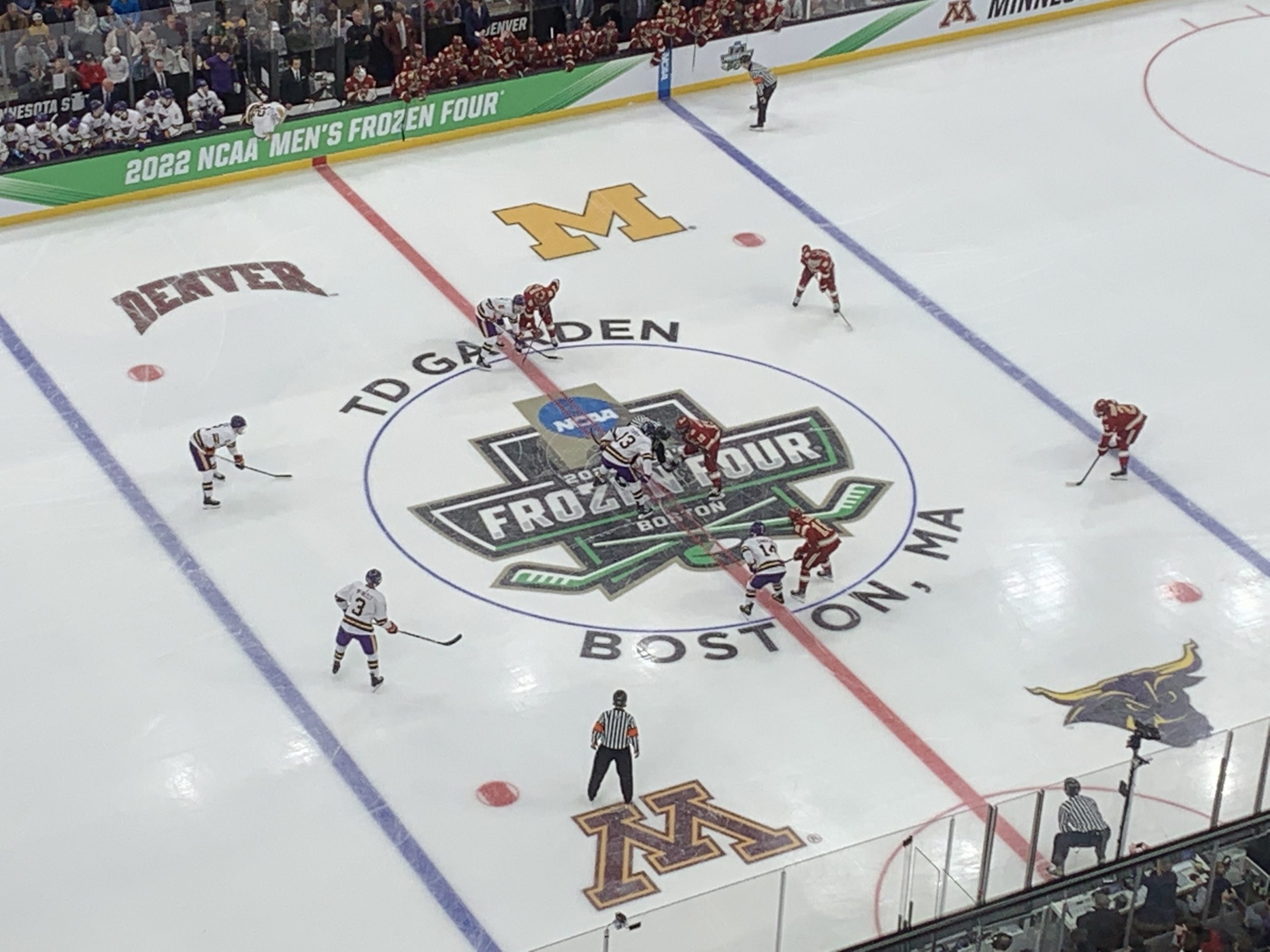 BOSTON — The University of Denver scored five unanswered goals in the third period to come back and win their ninth national championship, 5-1 against Minnesota State University at TD Garden on Saturday.

Sophomore defenseman Mike Benning scored with a one-timer from the left face-off circle to give the Pioneers a 2-1 lead with 12:27 remaining in regulation.

“I’m just kind of overwhelmed with everything,” Benning said. “I just saw a shot and took it. Went with my gut, and now we’re here. So, I’m happy. … It’s what you dream of as a little guy, winning a national championship.”

Minnesota State senior goaltender Dryden McKay said, “It was a heck of a shot. I mean, they worked it on the power play, and he just opened up for a one timer. It kind of went right by my [defenseman’s] face and right over my shoulder high, short side. Good shot by him. It would have been nice to get that one.”

Benning and senior forward Cameron Wright each had a goal and an assist for Denver (31-9-1, 18-6-0 NCHC), who won their second national title in the last five seasons.

“Words don’t describe the feelings. I’m so proud of our team and what they were able to accomplish this year,” said Pioneers head coach David Carle, who is the fourth-youngest coach to win a national title (32 years old). “We faced our biggest test tonight. Mike Hastings and his staff have an excellent hockey team, and they made us earn it. You’ve got to earn this trophy, and our guys earned it tonight. We’re so proud of them.”

“After the first goal, I felt almost immediately we were going to get a second one,” Chrona said. “And after those, it was just pure joy and trying to stay in the moment at the time and enjoy it.”

“I’ve got to give a shout out to Magnus here,” Barrow said. “For the first 40 minutes, I don’t think our team really realized we were in the national championship game there. He stood on his head, and once we kind of our feet under us there we were able to do what we do.”

“I thought we got off to a good start and had a good first 40 minutes,” Minnesota head coach Mike Hastings said. “Once we gave up the first one, I thought we were certainly leaking oil a little bit, and couldn’t stop the bleeding. … Congratulations to Denver for earning it.”

Morton put the Mavericks ahead 1-0 with 6:01 remaining in the first on the power play. Junior forward Brendan Furry’s rebound bounced into the high slot, and Sowder sent a touch pass to Morton for a one-timer through the five hole.

“I think we’re a defensive oriented team, so obviously we’re trying to defend hard and didn’t want to give up a goal,” Morton said. “Usually you need more than one to win a hockey game, so I think [Denver’s first goal] deflated us a little bit. It probably shouldn’t have.”

Denver had just eight shots on goal through the first two periods with two of their best chances coming from senior Cameron Wright, who missed an open net off a tic-tac-toe passing play at 12:17 of the second, and freshman forward Carter Mazur, who was met by McKay’s right pad in the slot at 17:21.

Barrow tied it 1-1 at 4:46 of the third. McKay saved Benning’s slap shot before the rebound landed on Barrow’s stick, and he shoveled a backhand five hole.

“I just think we’re battle tested,” Barrow said. He set a program record for games played Saturday with 168. “We’ve been through a lot of different games scenarios this year, and we’ve come out on top. So I think we’ve just had that experience, and I think that’s kind of how we’re able to turn the tide during the third.”

Senior forward Brett Stapley extended it to 4-1 on an empty net with 2:32 left, and Wright scored an empty net goal to give the Pioneers a 5-1 lead with two minutes remaining.