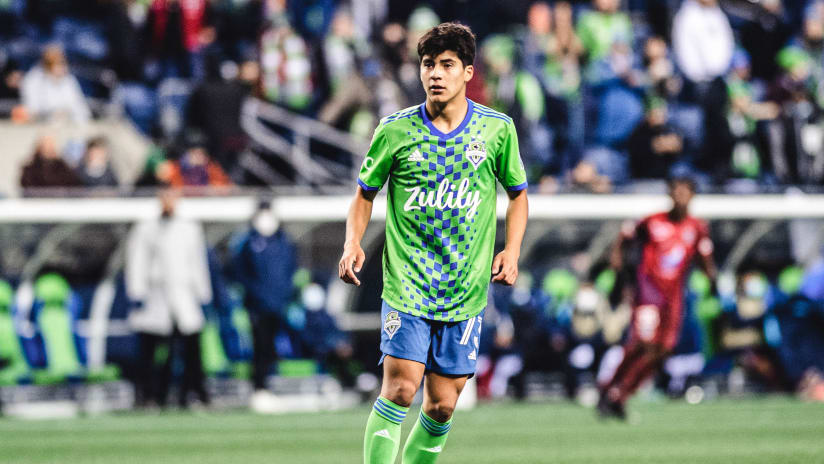 Guys like Alphonso Davies, Weston McKennie, and Tyler Adams are the names of just a few of the big names that represent the fruits of the growing soccer landscape in the U.S. and a league driven to foster a new generation of stars.

Just this January, we saw MLS’ last extraordinary export when 18-year-old American Ricardo Pepi made the move to Germany for $20 million. This is only the beginning of a burgeoning movement within the U.S. of A.

With that being said, The Young Player Initiative serves to potentially spot the next big name coming out of the States. After all, when a new shiny red, white, and blue presence starts to make itself known on the world market, it ought to be paid attention to.

Anyway, that’s enough of a preview.

Unless you were paying close attention to Under-20 and Under-15 United States national team camps in the past year, there is a good chance you’ve never heard of Obed Vargas before February. There’s a high probability you still don’t know who he is.

The 16-year-old midfielder from Alaska burst onto the scene only a couple weeks ago when the Seattle Sounders gave him the start in their knockout round Champions League tie against Honduran club Motagua. Vargas had been signed to a homegrown contract shortly after the 2021 season, but no one expected him to get the nod in a relatively stacked Seattle squad.

Not only did he start, but he looked like a veteran down in Central America, earning himself the start in the home leg of the tie a week later in a 5-0 demolition of the visitors. This was unprecedented, but surely he won’t start the first MLS game of the season with veteran Kellyn Rowe, Best XI player Joao Paolo, and fellow homegrown starlet Daniel Leyva coming back into the fold right? So said the naysayers.

Head coach Brian Schmetzer and Vargas laughed in their faces presumably as Vargas got his third start in as many games this past Sunday against Nashville.

The hype train is truly chugging along with full steam ahead. But why?

Although for most of us, Vargas came out of nowhere, the Alaskan native started making waves last year in the USL Championship with the Seattle Sounders’ second team, the Tacoma Defiance. He earned himself 28 appearances for the side, many of them coming before the standout could even legally drive a car.

Although he had played at the U-15 level for the USYNT, U-20 head coach Mikey Varas decided to call up Vargas up an age level in January for preparation for the 2023 U-20 World Cup. The second-youngest in the squad, Vargas reportedly positively surprised the coaching staff, as the starlet held his own amongst a group of relatively senior players.

In most scouting reports, and from the man’s (child’s?) own mouth, Vargas’ best position is as a defensive midfielder or a box-to-box midfielder. He has above average athleticism for his age, which explains his smooth transition to the professional game.

His primary skill set is his engine and ball progression— he has the ability to outrun almost anyone on the field and always looks to drive forward play. Vargas’ dribbling skills are also superb. Standing at 5-foot-9, although with time to grow, Vargas has an uncanny ability to find his way out of traffic and use shoulder feints to goad a defender into overcommitting.

Although Vargas’ technical ability can’t be overstated, it’s his brain that truly separates him from the rest in his age group. He shows a willingness to go into any challenge and a confidence on the ball that is sparse among many teenagers in the professional game. His defensive positioning is also quite astute.

Much of this translated in his performance against Nashville SC this past Sunday.

As he has in the past couple games for Seattle, Vargas started on the right side of a double-pivot in a 4-2-3-1. This time, he was paired with one of the best box-to-box midfielders in the league in Joao Paolo, so the 16-year-old was tasked to do much more of the defensive work.

For the most part, Vargas held his own. He was able to shut down passing lanes at times and stuck in a foot or his whole body into a player to win the ball. The 16-year-old won half his duels, which isn’t bad.

With Seattle having a majority of possession in the game, 58 percent to be exact, most of Vargas’ defensive actions happened in moments where Nashville won the ball high and broke down the field with pace.

Vargas was quick to get into defensive positions, tallying six recoveries on the night, but he had his hands full at times against Nashville’s Hany Mukhtar. This isn’t necessarily a surprise, however, as Mukhtar was an MVP candidate in 2021 and a dynamic playmaker who was in the 97th percentile for shot-creating actions in the league the year prior according to FBref.

It’s hard to pass tough judgment on Vargas in these moments as, although he’s a professional, he’s only 16-years-old starting his second ever MLS game. He’s got tons of time to grow literally and as a player.

A lot of his mistakes will most definitely serve as learning moments for the teenager. Take this moment in the 25th minute

His initial pass is way too forced and dangerous. Vargas doesn’t need to force himself into making an error, which he does here. His vision and his passing range and accuracy are definitely weak spots in his arsenal that he has plenty of time to remedy.

What makes Vargas such a top prospect is how he rebounds from this. He immediately tracks back and cuts off the passing lane to Mukhtar ,and when he gets the ball, he spins Eric Miller like a top with his movement and plays a line-splitting pass to start a counter attack.

I think my favorite clip of Vargas in his performance against Nashville comes shortly after in the 33rd minute.

Something early on in the game that I noticed was a slight unwillingness from Vargas to make runs into advanced positions. I think that’s partially due to Schmetzer’s game plan. However, this run between McCarty and Mukhtar is fantastic.

He recognizes the space very early on in the sequence, even before Rusnak is passed the ball and his passing lane is open. Such positional intuition is what sets him apart. Even on top of that, he’s able to feint and get out of a double-team with his back to goal (he’s pretty good with his back to goal if you haven’t noticed) and plays the easy pass to Adeniran.

It’s such a simple sequence, but what Vargas pulls off not many players under 20—even under 23—in MLS can execute.

I kind of put myself in a corner here deciding to pick Obed Vargas as my first player to analyze. What does a college student holed out in his dorm room watching 2021 Tacoma Defiance highlights know about a 16-year-old’s future? Nothing really, but I guess I can try.

All jokes aside, it’s impossible for anyone to guess Obed Vargas’ career with any sliver of confidence because of his age and how raw of a prospect he is. Here’s my go for what it’s worth.

He most definitely has some things to work on like his mid-to-long range passing and his attacking contribution. But he is a top-level talent that has extreme upside. If I were to make any comparison based on his skillset, it would probably be Leipzig and USMNT midfielder Tyler Adams.

Both have amazing defensive positioning, fantastic dribbling skills, the confidence to go into any challenge, and best of yet, high-tier footballing brains. Vargas is just breaking onto the scene two years earlier than when Tyler Adams did in New York at 18.

If you couldn’t tell, I also see Vargas’ best position as a hard-nosed, but agile, defensive midfielder. His skill set lends itself best to that type of play. I don’t know if his contribution in the final third will ever get to a level where he can be as good as a 10 or 8 than he is as a 6.

As far as his ceiling, well, sky’s the limit truly. He’s got all the tools to be a future UEFA Champions League player and a guy that gets sold for eight figures in a couple years. It’s up to Seattle to keep giving him minutes, even with Leyva and Atencio coming back from injury, and, of course, on Vargas to stay motivated, which I really don’t have any worries about.

If I were to give a prediction, he’ll be in Europe before the time he turns 19, which isn’t a hot take whatsoever. This one might be: don’t be surprised if you see Obed Vargas start to stamp himself with the USMNT senior team just as they host the World Cup in 2026. He’ll only be 20 years old by the way.