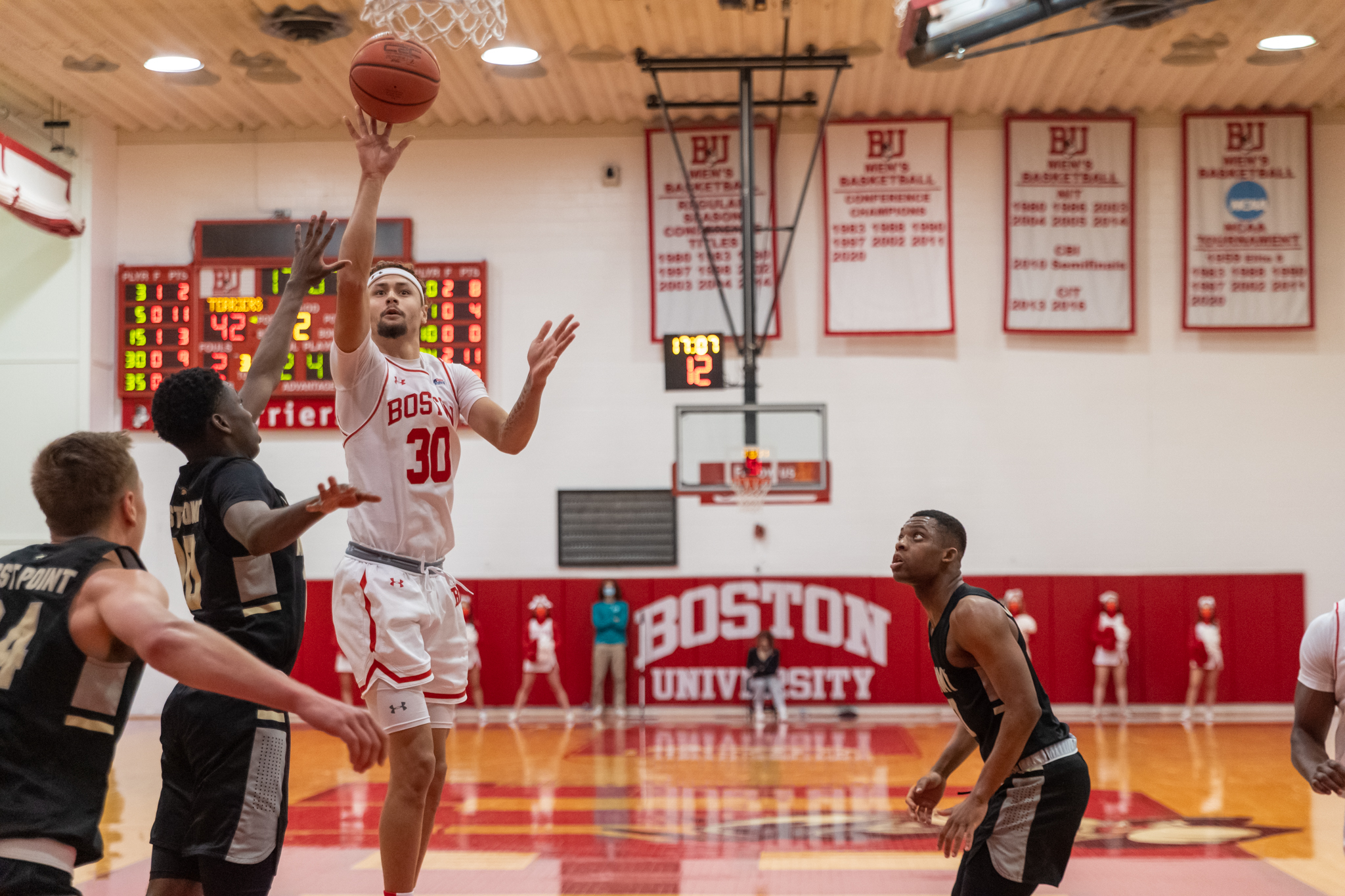 Six seniors and their families were honored before the game, including Jonas Harper, Sukhmail Mathon, Javante McCoy, Garrett Pascoe, Fletcher Tynen, and Walter Whyte. Boston University assistant coach Curtis Wilson spoke on how the program has benefitted from their oldest players.

“What they’ve done for this program over their time here has been tremendous,” said BU assistant coach Curtis Wilson. “They’re not only really good players, they’re just great guys and they care about each other.”

After their last-second win against Army earlier in the week, the practices ramped up big-time for this matchup against the always-dangerous American University.

“You try to figure out what things we need to do consistently to get better,” said Wilson. “We still have regular season games to play, but we also have the conference tournament coming up. So you just also want to think about the things you need to get better at. So when those times come, you can perform them.”

BU tied their season-high in points with the 85-point effort. Their previous best caame when they scored 85 against Division III Gordon College on Nov. 12. Wilson said it was just a matter of the Terriers sticking to their game plan.

“We let guys play their game within our offensive concepts,” said Wilson. “So, for example, with [McCoy], using ball screens or turning a corner and getting into the lane. You have [Whyte] trying to get to the basket posted up here and there. [Tynen], who helps facilitate offense, and does a great job of getting the guys balls in areas where it can be successful. And then you have [Harper] who’s a junkyard dog. So when he goes out, he’s gonna play his butt off on the defensive end of the floor.”

McCoy put together an exceptional performance, leading the team with 25 points and grabbing six rebounds. McCoy’s biggest play came in the third quarter, where he broke free of his defender and jammed home a massive dunk that brought everyone at Case Gym to their feet.

After setting a new season-high with 13 points last week against Lehigh, sophomore guard Daman Tate surpassed that once again by putting up 14, leading a balanced scoring attack from the bench. On a day honoring the seniors, the younger players showed what they were capable of as they got their opportunities.

“They’re there everyday in the trenches and practice,” said Wilson. “They’re listening and trying to learn from the older guys. Our older guys have that confidence in our younger guys.”

As the regular season winds down, the Terriers want to play with passion and heart on every possession but know that they can’t go too quickly, and have to play their game.

“Sometimes you have a tendency to over dribble or try to force a shot, because you’re just trying to have an impact.” said Wilson. “We tell the guys to let the game come to you, take your time. Don’t rush through it. Eventually, you’ll get what you want. If you’re patient enough.”