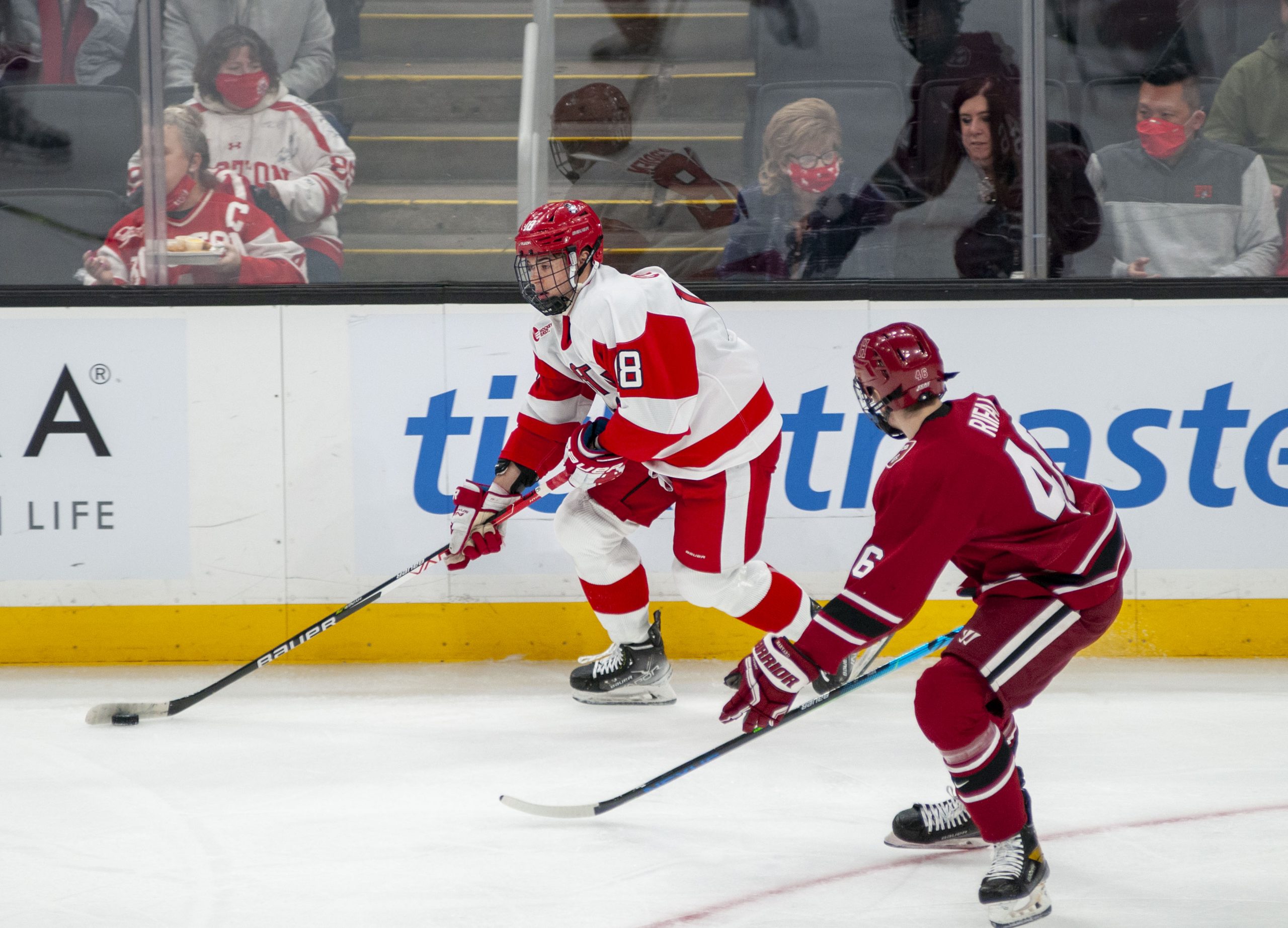 BOSTON — The Boston University Terriers edged the Harvard Crimson in a 4-3 decision in the semifinals of the 69th annual Beanpot tournament. Every Beanpot final has featured either Boston College, Boston University, or both, and that streak will continue as the Terriers punched their ticket to the championship round on Monday.

“It was great to see. A lot of people came out. The building got pretty full pretty quick, and I thought they saw a pretty good hockey game,” O’Connell said.

The game started out relatively quiet, with both teams struggling to get pucks to the net, but the fireworks began later in the first period.

Terrier captain Logan Cockerill broke the ice with 6:28 to go in the first. The fifth-year forward collected a cross-ice pass from Case McCarthey, drove the puck down the left-wing, and made a power move to the net. Cockerill deked to his backhand and slid the puck past the outstretched pad of Harvard netminder Mitchell Gibson to give the Terriers a 1-0 lead.

“I tried the same move five minutes prior to that, and I couldn’t get it in, but I don’t know. I just drove the net, took it to my backhand, and it went in,” Cockerill said.

35 seconds later, the Crimson got a response from their own captain. Casey Dornbach took a feed from his linemate, Matthew Coronato, and quickly roofed the puck over BU goaltender Vinny Duplessis’s left shoulder for his fifth goal of the season.

With the score tied 1-1, Harvard freshman defenseman John Fusco took a costly holding penalty with 3:55 remaining in the first to give BU the game’s first power play.

It took the Terriers just 26 seconds to take the lead with the man-advantage as junior forward Jay O’Brien took a pass from his classmate, Dom Fensore, drifted towards the top of the right-wing circle, and riffled a shot through traffic that Gibson never saw. Junior forwaard Wilmer Skoog and Fensore were credited with assists on the goal.

An eventful first period ended with the Terriers leading 2-1 and holding a 14-8 edge in shots. BU assistant captain Ty Amonte took a hard hit late in the first period and did not return to the game.

While the Terriers got important contributions from their veterans, Harvard’s inexperienced players continued to make costly mistakes. Four minutes into the second period, sophomore forward Alex Laferriere took a hooking penalty, and the Terrier power play quickly punished the Crimson.

10 seconds into the man-advantage, Terrier  junior forward Matt Brown collected a feed from Fensore and wired one short side over the blocker of Gibson to put the Terriers up two.

The goal was an emotional moment for Brown, who lost his mother last week. Brown immediately pointed to the sky after scoring.

A special moment for 3️⃣7️⃣.

We love you, Brownie. pic.twitter.com/w3zNy71Zch

“He probably has a heavy heart right now, but I think he’s probably looking up, thinking about his mother when he’s scoring the goal,” O’Connell said. “I was really happy for him.”

Back on Dec. 10, following a three-point effort against BC, O’Connell called freshman defender Ty Gallagher “a gamer,” who “shows up when the bright lights are on.”

11 minutes into the second period, he delivered when he fired a shot from the right point that was redirected into the goal by junior forward Ethan Phillips, his sixth of the season to put the Terriers up 4-1.

The Terriers looked like they had control of the game at that point, but things quickly went south.

Sophomore forward Dylan Peterson took a roughing penalty with 2:55 to go in the second, and the Harvard power play cashed in on a goal by freshman forward Zakary Karpa. Duplessis kicked out a Henry Thrun one-timer from the top of the right-wing circle, but Karpa knocked in the rebound to cut BU’s lead in half.

Watch Coronato clean up the rebound that brought us back within two! #GoCrimson pic.twitter.com/ClF7lfF8yb

Jack Donato buries one just 21 seconds after Coronato to make it 4-3! #GoCrimson pic.twitter.com/LCeTlYIT6R

The Terriers escaped the Crimson push thanks to the second period buzzer, allowing them to regroup in the dressing room.

BU woke up in the third period and held Harvard to just seven shots on goal. After the game, Cockerill quickly praised his team’s defensive play late in the game.

“We buckled down in the third period,” he said. “For nothing to happen, that’s a good job on us. [Harvard] really didn’t get all that much. I’ve played in a lot of crazier Beanpot games, where pucks are bouncing around the net. Beside maybe two or three times, we kept them to the outside and kept pucks away from the net.”

The Terriers held off a late Harvard surge where Duplessis made a few glove saves in the final minutes to walk away with a 4-3 victory.

They will head to Providence for a Thursday night matchup with the Friars, and next Monday night, at 8 pm, they will play for the Beanpot title against the winner of Boston College and defending champion Northeastern.