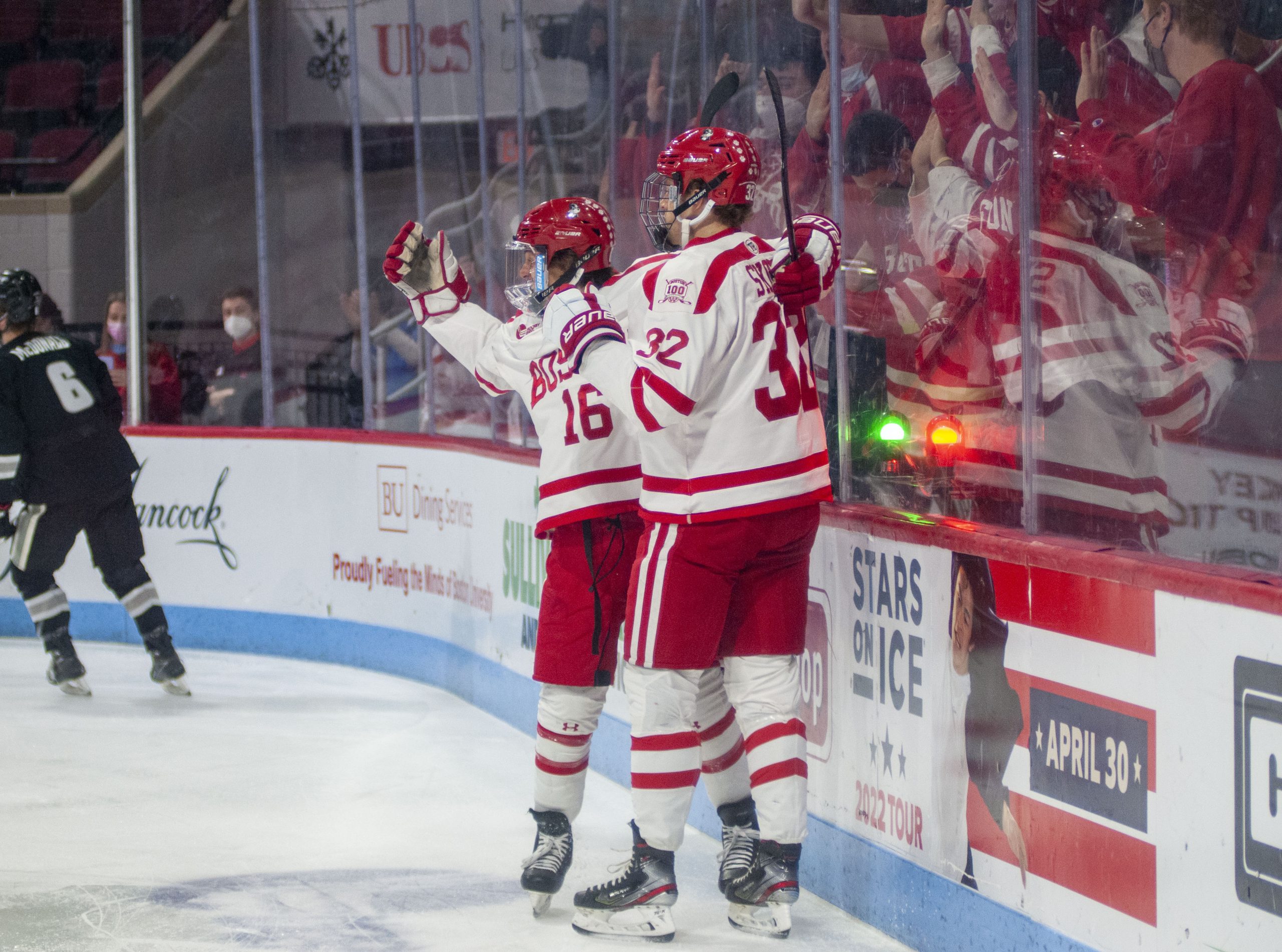 BOSTON, Mass. — Junior forwards Wilmer Skoog scored twice and Jay O’Brien had a goal and an assist for Boston University in a 5-2 win against Providence College at Agganis Arena on Sunday afternoon.

Junior forward Ethan Phillips and junior defenseman Dom Fensore also scored the Terriers (13-10-3, 9-6-3 HE), and freshman forward Tristan Amonte had an assist. Sophomore goaltender Drew Commesso made 36 saves in his final start before catching a plane to join Team USA for the Winter Olympics in Beijing. BU is 9-1-1 in their last 11 games, and ended the month of January 6-1.

“Very pleased with the result,” BU head coach Albie O’Connell said. “I like our hockey club. We’ve said it all year. We just got to keep getting better, and we’re almost there. If we can play 60 minutes, I think we’re tough out – if we can get to the point where we play a full 60. We didn’t have that tonight, but we had enough to win the hockey game.”

Skoog scored with a wrist shot under Stauber’s glove to make it 1-0 just 1:29 into the game on a 2-on-1 with junior forward Robert Mastrosimone.

“Honestly, I tried to go short-side, high, but it went low,” Skoog said. “That’s something I practice during the weeks, just trying to give a little look over to the other side and get a shot off.

The play started with Amonte chipping it to space for Skoog to pick up. O’Connell was impressed with how the freshman handled his elevated role after filling in for the absent Matt Brown on the second line.

“I thought he played great,” O’Connell said. “He was really effective. His skating seems like it continues to improve from the start of the year to now. He’s won a lot of foot races. He’s a tough kid. He’s smart player. He just brings a lot of value to the team… and his intelligence. For a young guy and a freshman, he plays the right way. So, he’s done a really good job.”

“I think Tristan was great, especially in the first period, he made a couple really good plays,” he said. “On that first goal, he took responsibility in the defensive zone and got a chip to me before we scored on the 2-on-1. Overall, I think he worked really hard, playing the right way. I’m happy he was on our line when Brown was gone.”

Phillips doubled BU’s lead at 13:04 with a wrist shot to the top right corner after picking off a Providence pass in the slot.

Moynihan got the Friars on the board at 14:24 of the second period with a backhand off a pass from fifth-year defenseman Davis Bunz.

Commesso made 15 saves in the second period as Providence made a push to get back into the game.

“Providence is a good hockey team, one of the better teams we’ve faced all year, and we knew that they were going to make a push,” O’Connell said. “I thought we got a little sloppy with the puck, and they did a very good job of transitioning in that second period and hemming us in. I thought what saved us was obviously the goalie made some saves, but we also had some key block shots in that second stanza.”

Skoog restored BU’s two-goal lead at 5:42 of the third with a shot right off the face-off that beat Stauber to the five hole, and Fensore made it 4-1 with a wrist shot from the point on the power play 1:09 later. Junior forward Sam Stevens scored a nearly identical goal to Skoog’s in a 4-1 win against Sacred Heart at Agganis on Oct. 16.

“We were talking about what plays to run off the face-off, and I know Stevens has done the same thing before and scored,” Skoog said. “I saw their centerman lining up a little off, and I had a clear lane to the net. So, I gave it a try, and it went in. It was fun.”

Wilmer Skoog already has a lacrosse goal on his resumé, now he's got a goal directly off a faceoff! #SCtop10@ESPNAssignDesk | @collegehockey pic.twitter.com/D2OYP5FXqr

O’Connell was pleased to see Skoog bounce back from a quiet game against UMass earlier in the week.

“He was fighting the puck the other night, and he didn’t quite have his edge. He was physical tonight, and he had his hands,’ O’Connell said. “When Skoog plays well, normally we have a pretty good opportunity to win. He’s a big factor when he can give us, not only offense, but play with that edge. … He can really be a difference maker, and when he’s on, he’s as good as anyone.”

Poisson cut it to 4-2 at 9:44 on the power play, redirecting Berard’s pass in front of the crease.

O’Brien iced it with an empty-netter with 1:50 remaining for the 5-2 final after forcing a turnover at his defensive blue line. The former Friar had a game-high seven shots on goal.

He had two goals and an assist in two games against PC last season. The Hingham, Mass., native is BU’s only point per game player this season with 15 points (six goals, nine assists) in 15 games this season.

Jay O'Brien with 1g, 1a and a game-high seven shots vs. Providence today.

Had pace and intensity, and deserved to get one. Can tell the empty-netter to ice it vs. his old team meant a lot. Had 2g, 1a in two games vs. PC last year.

“I thought it was a big moment for us, you know to have to try to close a team out, win a hockey game, and do it in the right fashion,” O’Connell said. “The bench was good. The leadership was good, and and we closed the game. We did a good job.”

Junior forward Markus Boguslavsky drew into the lineup for the second time since Oct. 30, skating in five games this season. O’Connell was complimentary of junior forwards Boguslavsky, Sam Stevens and Jamie Armstrong’s line.

“They were great. All three of them are big. They’re strong. They played heavy,” O’Connell said. “[Armstrong] after sitting a game and getting plugged in against UMass after the injury [to Nick Zabaneh], I thought he was terrific. I thought [Boguslavsky], for not playing for a long time, played really well. Stevens has been really consistent this year, especially in the face off dot. They gave us a lot of really good shifts.”

The Terriers will return to action when they host Maine on Friday at 7:30 p.m.