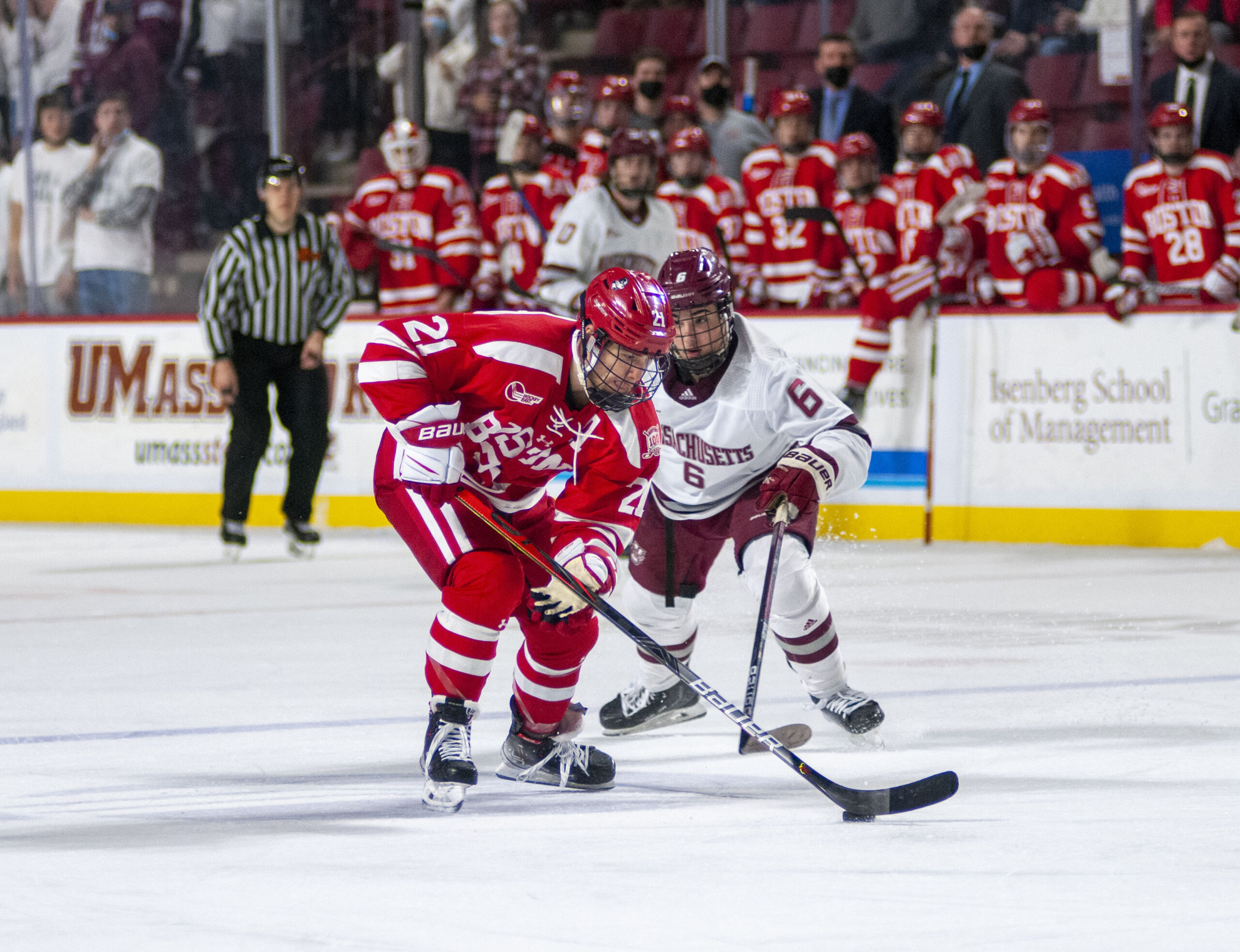 AMHERST, Mass. — The Boston University Terriers scored four unanswered goals to start the game, and held on to win 6-4 against the University of Massachusetts Minutemen on the road at the Mullins Center on Tuesday.

Senior captain Logan Cockerill scored twice for BU (12-10-3, 8-6-3 HE), including the eventual game-winner. Junior forward Matt Brown and graduate assistant captain Max Kaufman each had a goal and an assist. Sophomore goaltender Drew Commesso made 32 saves.

“Pretty excited to get a road win, especially here in that environment,” BU head coach Albie O’Connell said. “I thought we started well. I thought for the first two periods, we controlled the play, especially in the first with multiple odd-rushes.

“There was a little bit of back and forth in that second period. … In the third period, they kind of took it to us. We bent. We didn’t break. … All in all, it’s a hard league to win in, and it’s hard to win here. It’s a big game for us to continue to play well and get points in the league, especially doing it in regulation.”

Senior defenseman Matt Kessel had a goal and an assist for UMass (12-7-2, 9-3-2 HE). Graduate goaltender Matt Murray allowed four goals on 18 shots before being replaced by freshman Luke Pavicich (one goal on nine shots) early in the second period.

“I think we were a little guilty of being complacent after an easy win on Saturday night,” UMass coach Greg Carvel said. “BU was very opportunistic in the first period. We weren’t playing great. It seemed like every chance they got was in the back of the net. … Just can’t dig yourself a 4-0 hole and expect to win.”

Cockerill gave BU a 1-0 lead at 10:53 of the first with a wrist shot from the bottom of the right face-off circle after taking a cross-crease pass from Kaufman.

“I think we were getting on the forecheck and just kind of using our speed and physicality,” Cockerill said. “We got three guys [on my line with Kaufman and Ty Amonte] who are fifth-years, so we should be able to be strong on the puck, and take some pucks off guys. We just made a couple plays.”

Brown made it 2-0 shorthanded at 16:49 with a wrist shot on a 2-on-1, and junior forward Robert Mastrosimone made it 3-0 with 7.3 seconds remaining in the first after Brown’s net-front pass bounced off him and in.

Junior forward Ethan Phillips scored at 3:32 of the second to make it 4-0 with a wrist shot to the top right corner.

UMass senior forward Anthony Del Gaizo got the Minutemen on the board with a power play goal at 5:37 before senior captain Bobby Trivigno cut it to 4-3 26 seconds later.

“You don’t really focus on the big ‘4’ on the scoreboard so much,” Trivigno said. “You just focus on doing the little things right, and just keep working away and chipping away at it. I thought we did that, but I think we dug ourselves a little too big of a hole in the beginning.”

Cockerill answered for BU with a backhand from the slot at 10:49 to make it 5-2, and freshman defenseman Scott Morrow brought UMass back to within two 18 seconds later.

Cockerill is a point per game player at the Mullins Center over the course of his career with four goals and an assist in five games. He had a two-goal game on the road at UMass last season as well.

“It must be something in the ice,” Cockerill said.

Kessel cut it to 5-4 at 9:28 of the third moments after UMass had thought they scored before the officials ruled no goal on a whacky bounce around Commesso.

“Give the kids credit. They fought back,” Carvel said. “I thought the second half of the game we played pretty well. I thought we were going t find a way in the third period, especially after we scored the fourth goal. The puck was basically in their end the whole period.”

The Minutemen outshot BU 15-4 in the final period, and the O’Connell said the Terriers started to get worn down and frustrated.

“We ended up taking a timeout because first, guys were a little gassed, and second, Commesso was throwing up a couple times between the first and second period,” O’Connell said. “I don’t know if he had food poisoning or if he was sick, but he was kind of gassed. So we were just trying to get him a little bit of a breather too.

Kaufman scored on the empty net with 39.9 seconds left in regulation for the 6-4 final.

BU will return to action on Sunday afternoon as they host Providence, who will be coming off a visit to UMass on Friday. Puck drop for Sunday’s contest is scheduled for 3 p.m.

Featured Image: Graduate assistant captain Max Kaufman (21) skates into the offensive zone against UMass freshman defenseman Ryan Ufko (6) before scoring on the empty net late in the third period of a 6-4 win at the Mullins Center on Tuesday, Jan. 25, 2021. Photo by Patrick Donnelly