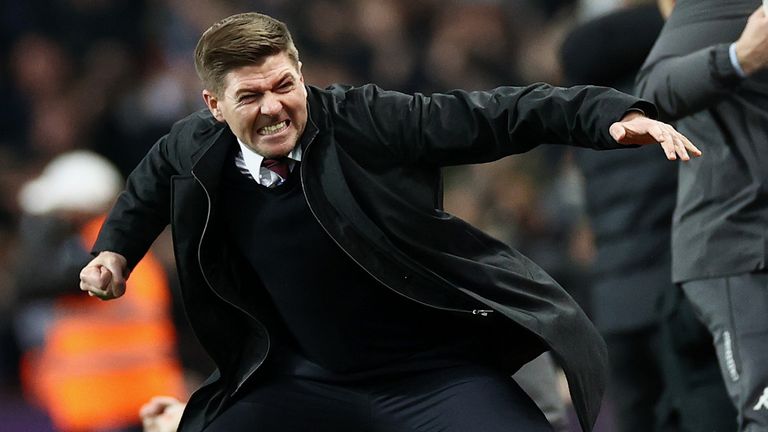 When Dean Smith was sacked as Aston Villa manager in early November, many including myself questioned the decision. Smith had kept Aston Villa in the Premier League when their safety looked anything but certain, and last season played a very attractive style of football with some decent results.

Losing starman Jack Grealish to Manchester City for £100 million was always going to be an issue, but with what looked like good business done in replacing the impact of Grealish, Villa fans were optimistic about the season to come. When trying to implement three or four new players into the squad as Smith was tasked with at the beginning of this season, there was always going to be a transition period. When things didn’t click right away, and Villa lost four in a row, the hierarchy thought it was time for a change, and relieved Smith of his duties. What seemed like a bizarre and somewhat rash decision at first glance, turned into one of the most ambitious moves made by a Premier League club in a long time.

Who would Aston Villa bring in to replace Smith? Liverpool legend and Rangers manager Steven Gerrard.

Steven Gerrard is an icon, there are no two ways about it. Yes, I know he never managed to win a Premier League title, but he came agonizingly close, and did manage to pull off one of the most historic Champions League wins there has ever been in 2005 against AC Milan. Gerrard was consistently one of the top five midfielders in the 2000s and no one could question his pedigree as a footballer.

Gerrard started his managerial career a few years ago in Scotland with Rangers, a club steeped in history but who were underperforming. Under Gerrard’s tutelage, Rangers reclaimed the Scottish title over Celtic, and became relevant again in European competitions such as the Europa League. When rumors surfaced about the opportunity for Gerrard to come back to the Premier League as a manager, there were some doubts of whether he would be able to manage at the level required, as the Scottish league pales in comparison to the prowess of the Premier League. Within the first few games, anyone could see that was not going to be a problem.

With back-to-back wins to start, and an impressive third match against the imperious Manchester City despite a loss immediately changed the atmosphere within the Villa dressing room, and Villa Park itself. Gerrard was passionate on the sideline, always encouraging his players, and they responded, playing some scintillating football at times. With a clear momentum shift and calm restored to Villa Park, the icon that is Steven Gerrard truly started to work his magic.

The January transfer window is a tricky time to do business. With many clubs reluctant to sell, and high fees being demanded for players, I don’t think too many thought Villa would dip their hands into the market after the active summer window they had. However, with Gerrard now at the helm, the midlands club could now attract a whole different level of player.

Right away Villa was linked with names such as Everton left-back Lucas Digne, Brighton midfielder Yves Bissouma, and even Barcelona and ex-Liverpool starlet Philippe Coutinho. Villa has been prone to striking a deal should the opportunity arise, and with more players becoming open to the idea of playing for Gerrard and Villa, deals are being struck that could not once before.

Digne signed just over a week into the window for around £27 million from strugglers Everton, and just days later, a loan deal was announced for Coutinho until the end of the season, who played with Gerrard for a brief period at Liverpool. With impressive signings being made that would not have seemed likely at the start of the season when Smith was manager, the decision which was questioned by many seems to have paid off as Gerrard is adding a different level of quality to the squad. With clear financial backing from the Villa board, there is a strong chance Aston Villa could have a real go at some sort of European football next season under Gerrard.

The impact of the two signings was clear to see in the first game they played for Villa. Down 2-0 to Manchester United, Gerrard subbed on Coutinho with 20 minutes to go to make his debut. By the time the final whistle blew, Coutinho assisted one goal, and scored another, rescuing a point out of nowhere for the Birmingham club. That sheer talent and prowess of players like Digne and Coutinho are what will propel Villa forward, and with an experienced head like Gerrard at the helm, Villa could become a serious threat with some more financial backing, which does not appear to be slowing down.

Credit has to be given to Christian Purslow and the rest of the Villa board, no doubt. It was a risky move to sack Smith, and it has turned out to be the right one for them. The Gerrard appointment did have potential, but not many could have predicted he would change as much as he has already.

Aston Villa is a massive club, with a passionate and dedicated fan base, and while Villa may only be a stepping stone for Gerrard in the grand scheme of his managerial career, he could transform them into a club consistently challenging for European places in the Premier League. That’s a possibility no Villa fan could have foreseen just two seasons ago when they were battling relegation.