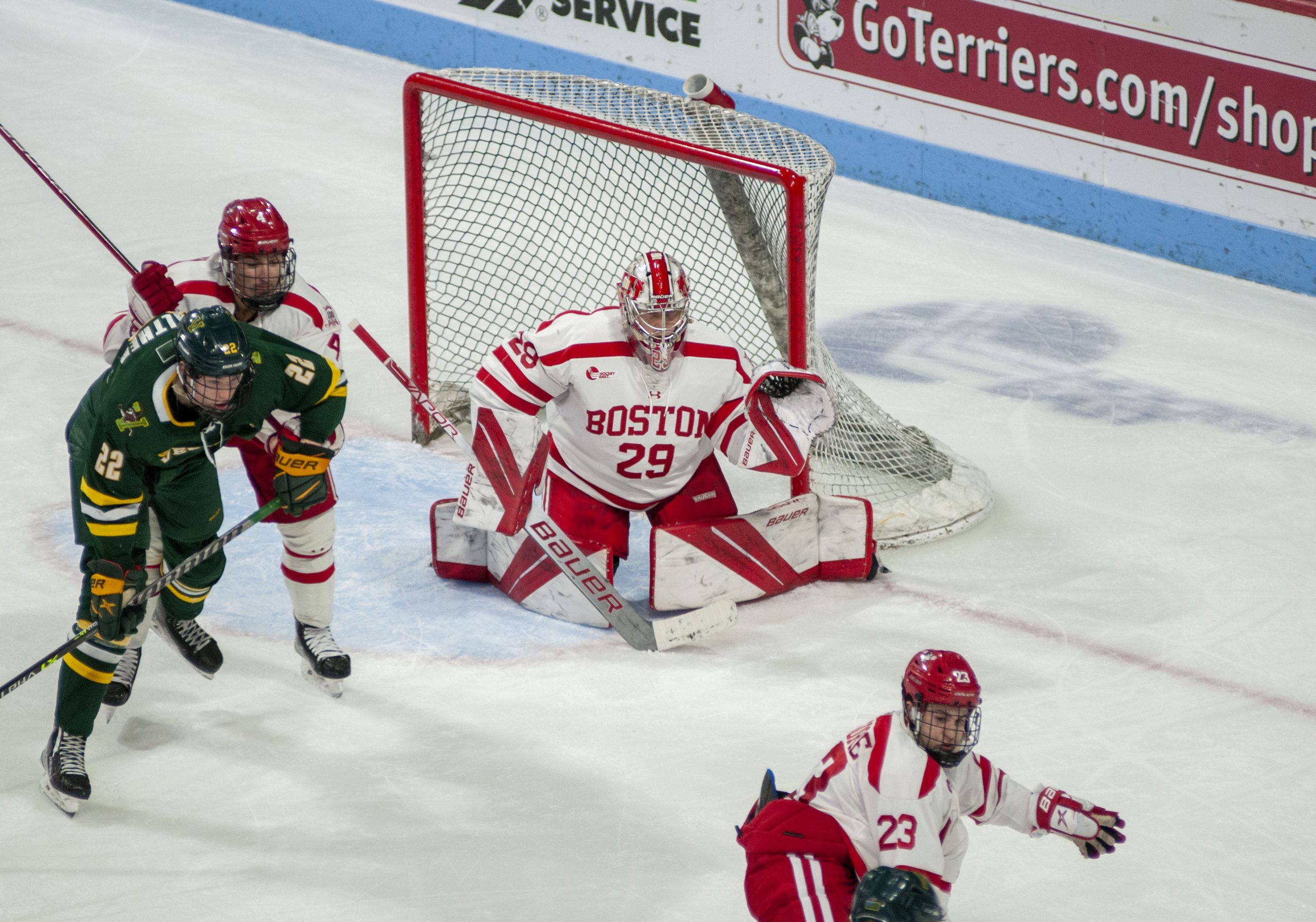 After Friday night’s disappointing result, the Terriers proved their concerned fans wrong with an emphatic 4-0 against the University of Vermont Catamounts.

This weekend was a big one for the Terriers, and while it wasn’t perfect, there is still optimism to be shown after taking four out of six possible points against UVM. Now with the 69th annual Beanpot just around the corner, BU exits this weekend with a record of (11-10-3, 7-6-3 HE), while Vermont stays near the bottom of the conference at (4-15-2, 3-8-2 HE)

“It was a better result obviously with us getting a shutout as well”, said BU head coach Albie O’Connell after his team patched up a lot of smaller mistakes to put together a complete sixty minutes. “We did a lot of things better tonight and had a lot more urgency to our game.”

While there were some surprising scratches, such as sophomore forward Dylan Peterson, the changes to the lineup instantly paid off for the Terriers with the return of freshman forward Brian Carrabes. Within the first three minutes of the opening period, the freshman threw a hard low shot on net that was deflected by Sam Stevens, who was driving hard to the crease. This was the junior’s fourth goal of the season and got the Terriers off to a great start just like Friday’s contest. Unlike Friday’s game, the shots were dead even after period one, with the Catamounts providing more resistance this time around.

What a way to get things started at Agganis! pic.twitter.com/bjD2r11CYQ

There were a couple of things that kept the Terriers in the driver seat again at Agganis Arena. For starters, a much improved forecheck constantly put pressure on Vermont’s defense. One catalyst of the added pressure was a new addition to the lineup in the form of freshman forward Tristan Amonte, who helped drive the physicality of an active Terrier fourth line.

“Our fourth line was probably our best line,” said O’Connell. This energy led to an abundance of quality chances.

“Quality of chances were a lot better. Last night we were more of a perimeter team. Tonight we made it harder for them around their crease,” said junior forward Ethan Phillips when describing how his team improved.

Phillips certainly helped his own cause by adding the Terriers second of the night after freshman defenseman Ty Gallagher made a patient play, which left a gaping net for Phillips to put away his second of the season. Senior captain Logan Cockerill also picked up an assist after setting up the whole play with an impressive drive through the neutral zone.

A beautiful rush from Coxy and great patience from Gally leads to Philly's second goal of the season! pic.twitter.com/9IXzU60kFf

While the Terriers went 0-for-2 on the man-advantage, it has been their penalty kill that’s really impressed. The unit hasn’t allowed a power play goal since mid-November, and will be a crucial part of the team if they are planning to climb up the Hockey East standings. O’Connell thought another aspect of the game that improved from Friday was the Terriers’ ability to stick to their game plan.

“Our breakouts were really clean and helped us get out of our zone easily. Our consistency to our game was really good,” said O’Connell.

The shots after two periods weren’t as lopsided as Friday, but the Terriers still had a 23-20 advantage. That all changed in the third when the Catamounts peppered BU’s Drew Commesso with 15 shots, while the Terriers managed just five.

“At the end of the game they kept on fighting. We couldn’t win a face-off,” said O’Connell. This, however, didn’t stop the sophomore netminder from giving a stellar performance and stopping all 35 Vermont shots to record his first career shutout.

“Yeah it’s obviously great getting the shutout. It’s always a team effort. A shutout is nice, but I care most about getting the win,” said a humble Commesso following another impressive showing. Commessso credited a lot of his progress in net to goaltending coach Mike Geragosian, who has a track record of producing quality goalies.

“He deserves it. He’s played a lot of great games for us and it’s long overdue,” said teammate Ethan Phillips.

While Commesso was able to push aside everything the Catamounts tossed his way, the Terriers were very efficient with their chances in the third, converting on two of their five shots. The first of the two goals came on a breakaway where junior forward Robert Mastrosimone pulled off a highlight reel move to beat a sprawling Gabe Carriere.

Mastro making a case for his second #SCTop10 appearance of the season with this highlight-reel goal!@collegehockey | @ESPNAssignDesk pic.twitter.com/89HZtxu1HE

The majority of the work was done by the Detroit Red Wings prospect, who carried the puck past a defender to get his eighth of the year, but the assists went to junior forwards Matt Brown and Wilmer Skoog. Mastrosimone was the only BU player to score in both games this weekend, potting the lone Terrier tally in Friday’s 2-1 overtime loss.

Now with Vermont on the ropes, the game opened up as they sent their weak side defenseman higher up the ice, which diverted from their standard 1-3-1 approach. This left them vulnerable on the counter attack, which BU exploited through a pretty passing play leading to an Phillips breakaway, which he writsted past Carriere’s glove for his second of the game.

Hey @ESPNAssignDesk is it possible to get two goals on #SCTop10 tonight? Asking for a friend. pic.twitter.com/6ZuVjvvuJH

The play was brilliantly set up by sophomore forward Luke Tuch and junior forward Jay O’Brien, who found their new linemate for the goal that put the game to bed. Those two, along with Phillips brought plenty of physicality, and looked as though they had played together all season long.

“We thought that Philly was playing really well. We thought he could bring some dynamic skating to that line. Whatever line he plays on he does well,” said O’Connell when talking about some of the team’s adjustments. Phillips, despite only having three goals this season, has been in the praises of O’Connell as of late and has shown his value to the team when healthy.

Phillips, who missed the early part of the season due to injury, has slowly been gaining traction and still feels he has room to grow.

“With the amount of time I spent out, I had a lot of time to think about the type of player I wanted to be when I came back. I’m just trying to stick to my strengths,” said Phillips. When asked about what type of player he wants to become, he spoke on how he wants to be a “shot-first player going forward.”

The Terriers have a quick turn around that includes two massive fixtures, the first against No. 14 UMass on the road for a 7 p.m. puck drop on Tuesday night.

“We’ll probably just have a short practice and then get back out there. I hope [UMass] had a tough weekend as well,” said O’Connell.

After battling last year’s national champions, the BU will return to Agganis Arena to take on another ranked opponent in the Providence Friars. That matchup is scheduled for 4 p.m. on Sunday.