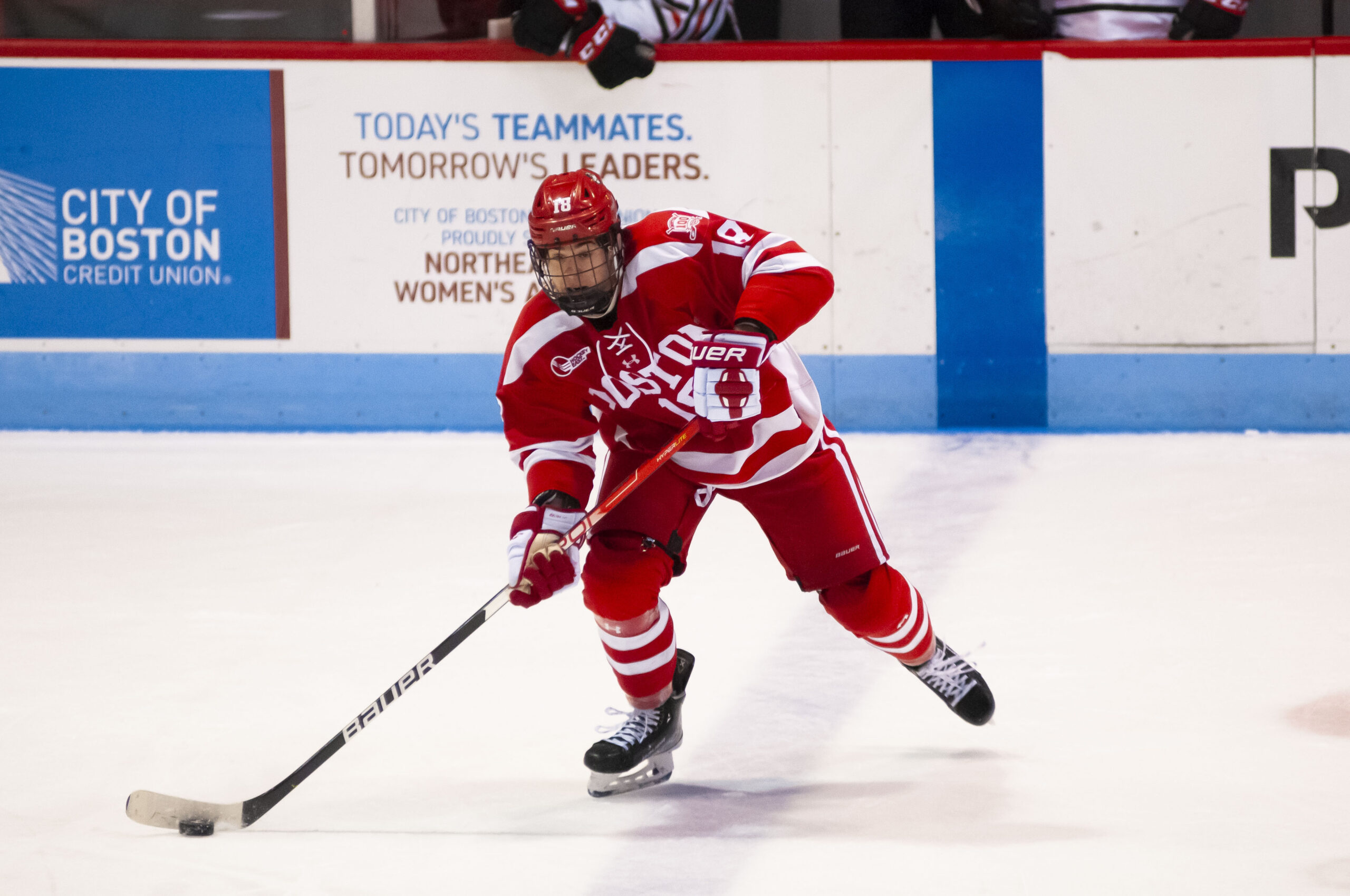 HARTFORD, Conn. — Jay O’Brien scored the game-winning goal in overtime in a 2-1 win for the Boston University Terriers against the University of Connecticut Huskies at the XL Center on Friday.

O’Brien scored eight seconds into overtime off the opening face-off with a wrist shot from the right circle, beating UConn graduate goaltender Darion Hanson to the blocker side.

“[Hanson] had my number a little bit tonight, so I needed to give him a little bit of payback,” O’Brien said. “I wouldn’t say I was shooting for a rebound, but I tried to bury it. Lucky enough it went in. It was a good win for us.”

Jay O'Brien's game-winner: Walks right in off the opening face-off of OT and roofs a wrister to win it. 12 points (5g, 7a) in 11 games for O'Brien this year. pic.twitter.com/wyoScfGe0F

Junior forward Matt Brown scored, and junior forward Ethan Phillips and junior defenseman Dom Fensore each had assists. Sophomore goaltender Drew Commesso made 25 saves for BU (10-9-3, 6-5-3 HE). The Terriers have won four games in a row, six of their last seven, and are unbeaten in in seven games, the second-longest streak in the nation.

“I’m very pleased with the way we played down here,” BU head coach Albie O’Connell said. “We were able to make a play in overtime. We’ve been on both sides of it this year. It’s great when you win in overtime. It’s not great when you lose, and the point system is frustrating that it goes down as a loss because for UConn, they probably thought they played a pretty good game, and probably should have gotten a tie on that. But those are the breaks, and we made one more play than they did.”

Brown scored with 2:50 remaining in the first to give BU a 1-0 lead. Fensore forced a turnover in the neutral zone, and Phillips made a move around the UConn defender to get the puck to Brown, who beat Hanson with a backhand. Brown now has seven points (five goals, two assists) in his last seven games, including the exhibition loss against the USA u-18 team.

Matt Brown's goal: Fensore's back-check pressure in the neutral zone forces a turnover. Phillips makes a good move to get around the defenseman, and Brown maintains control before roofing the backhand. May have caught Hanson off guard. 1-0 BU. pic.twitter.com/jkan6yAqvm

“Brown’s gotten healthy, which is the biggest thing [for his success],” O’Connell said. “He’s starting to move the way he can move, and with that shot, he didn’t have a lot of room. He’s a guy that can get hot, and offensively he’s a weapon. … He’s got elite offensive ability.

The second period saw back and forth chances for both teams, highlighted by Hanson’s right pad save on sophomore defenseman Cade Webber with 3:31 remaining.

Holy cow what a save by Darion Hanson. Flashes the right leg to ROB Cade Webber before getting his stick on Fensore's rebound bid. Hanson got some taps from BU on his way back to the UConn bench during the TV timeout. pic.twitter.com/qOCFJX41Xl

Chase Bradley's goal: BU gets discombobulated defensively, and UConn gets a couple chances between Jachym Kondelik and Bradley. Rebound gets pushed right to Bradley, who buries it. pic.twitter.com/CMfslUDViN

O’Connell thought there was not much Commesso could have done on the goal in his eyes, saying the young goaltender had a strong game otherwise.

Commesso improved to 9-7-3 with a .909 save percentage and 2.59 goals-against named to the United States men’s Olympic team on Thursday.

“It’s really exciting,” Commesso said. “It’s been a dream of mine for a while. A lot of things have been cancelled due to COVID, which is really unfortunate, but I feel like this is kind of a silver lining. I’m very excited for the opportunity.”

O’Connell said the Terriers are completely supportive of Commesso as he heads to Beijing to join Team USA in a short while.

“We’re psyched for him. It’s a big honor,” O’Connell said. “He gets a chance to represent his country. We told him, whatever his decision was, we’d support him either way if he wanted to stay or go.”

O’Brien now has eight points (three goals, five assists) in four games since returning from the holiday break. He is the only point per game player for the Terriers with 12 points (five goals, seven assists) in 11 games on the season, despite being in and out of the lineup due to injury.

“I think away from the ice, just getting dialed in [has been key],” O’Brien said. “I’ve had some tough goes here with injuries, but I was just staying strong, staying positive and just being around the guys. You never want to be hurt. … When I’m healthy, I’m ready to go.”

“We’re happy he’s on our side,” O’Connell said. “He was snakebitten a little bit tonight. He was really good, and his line was really good. I’m happy for him because he’s had some ups and downs this year. He’s been on the shelf quite a bit, and we’re a different hockey team when he’s in the lineup.”

BU will return to action next weekend when they host the University of Vermont for two games at Agganis Arena. Puck drop on Friday is set for 7 p.m., while Saturday’s matchup is slated to get underway at 4 p.m.