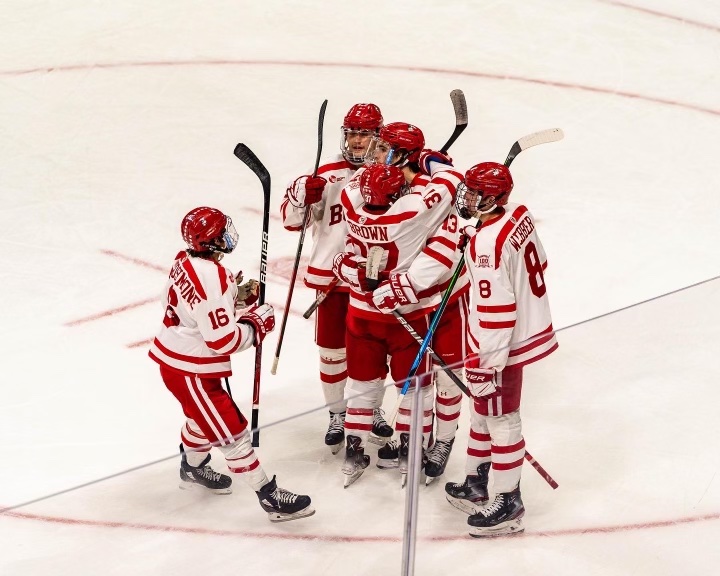 With the amount of talent that Boston University possesses, not many neutrals would’ve expected the Terriers to have so much work left to do in the season, and it’s not just related to conference play. The Terriers (9-9-3, 5-5-3 H.E) haven’t been ranked in the top 20 since late October, and even with other Hockey East teams underperforming this year, BU finds itself tied for sixth in the conference. The team they share that tie with, the UConn Huskies (9-8-0, 6-4-0 H.E), will face off with the Terriers this Friday at the XL Center in Hartford.

The Terriers were triumphant in their first trip to Connecticut, pulling out a 2-1 victory behind two late goals from Sam Stevens and Robert Mastrosimone. However, in the other battle against the Huskies, BU was blown out in their 2021-22 home opener at Agganis Arena by a final of 5-1.

Despite being the visitors, the Terriers haven’t lost at UConn since 2015, and hold an overall 11-7-2 record all time against the Huskies. UConn has come out of the gate a little slow in 2022, losing two of their first three games including a loss to AIC.

“They’ve got a really good blend of forwards. … They’re extremely good off the rush and they can score,” said Terriers coach Albie O’Connell at his midweek press conference. Despite the recent trends in the right direction for BU, O’Connell still has some hesitation with this matchup. “They gave it to us pretty good in our own building,” he said when regarding this impressive Huskies squad.

This test against UConn has presented a ton of tight games over the years, but one thing this matchup never lacks is physicality, with the Huskies being one of the most heavy hitting teams in college hockey.

Despite the difficult opponent ahead, BU has a lot of confidence coming into this game. Since their loss in the exhibition against the USA U-18 team, the Terriers are 3-0-0, which includes a sweep of the high scoring ASU Sun Devils. What makes the two wins even more impressive is that just a few days later, ASU went into Matthews Arena and dominated a very highly ranked Northeastern team 6-2.

“The boys didn’t really know how well they played last week until they saw what Arizona did against Northeastern,” said O’Connell. The power play that the Sun Devils used to light up NU was practically non-existent against BU, with the Terriers continuing to work on their penalty kill that has been up and down so far this season.

When asked about what the team needs to work on going forward, O’Connell stated, “positionally, we have to do better on the power play and penalty kill.”

That continuity and improvement on the special teams is going to be tricky when roster consistency is hard to come by right now, not just for the Terriers, but the entire NCAA.

“We had a couple guys missing and we will probably have a couple more this week. That’s going to be the nature of the beast for the rest of the season,” said O’Connell when discussing what the troubles moving forward might look like.

Most of these absences are either due to COVID-19 or various injuries, but just like in 2018 when the NHL refused to allow player participation in the Olympics, BU was hit hard again. In 2018, Pyeongchang took Jordan Greenway from the Terriers, now it’s Drew Commesso’s turn as he will get his chance to shine on the world stage representing team USA.

“It’s like the World Juniors with less preparation. … We won’t be the only team that loses guys for the Olympics,” said O’Connell when asked about the possibility of losing players for Olympic competition.

BU will still have Commesso for the next few weeks. The sophomore goaltender is 8-7-3 with a .903 save percentage and a 2.67 goals-against average.

In net for the Huskies will most likely be Union grad transfer Darion Hansen, who holds a 9-7-0 record with a respectable 2.62 GAA and an impressive .912 save percentage.

UConn is lead by a duo of underclassmen. Sophomore Ryan Tverberg leads the team in points (17) and goals (9) in 17 games, while freshman Jachym Kondelik is second with 16 points (6 g, 10 a) in 17 games. Kondelik is also one of the nation’s top faceoff winners coming at 24th overfall in most face-offs won.

“They’re really good in the face-off circle. … Condelik is one of the best face-off men in the league. He can take it off both sides and win it physically too,” said O’Connell in regard to UConn’s advantage in the circle. Face-offs have been an issue for BU all season long, still sitting in the bottom third of college hockey as a team at 47.9 percent.

Leading charge for the Terriers is defenseman Dom Fensore, who paces all BU skaters in points with 17 (3g, 14a) in 21 games. Fesnore also got the nod as the team’s nomination for the Hobey Baker award, which is for the most outstanding player in all of college hockey.

“He’s been really good at both ends. For a small guy he goes into the corners and wins puck and his skating is world class. When he’s playing well he’s playing within himself and moving the puck,” said O’Connell, who didn’t have enough good things to say about the 2019 third round pick of the Carolina Hurricanes. The head coach also believes that Fensore is “arguably one of the best offensive defenseman in our league.”

Fellow juniors Mastrosimone and Wilmer Skoog have supported him with 15 and 14 points respectively. However, the most efficient Terrier has been Jay O’Brien, who has put up 11 points in just 10 games and looks to stay in the lineup for the remainder of the season.

While there are many little things that could decide this contest, O’Connell stressed the significance of effort on defense.

“It’s important that we play good defense. We need to transition the puck out of our zone well,” said O’Connell, who recognized the defensive errors of both UConn and BC in their battle last week that essentially decided the game.

Puck drop is at 7:05 p.m. on Friday night with three massive points on the line for both squads. While the Terriers hope for a victory, they’re not looking just to impress the rest of Hockey East, but the entire NCAA as well as they try to regain a spot in the top 20.