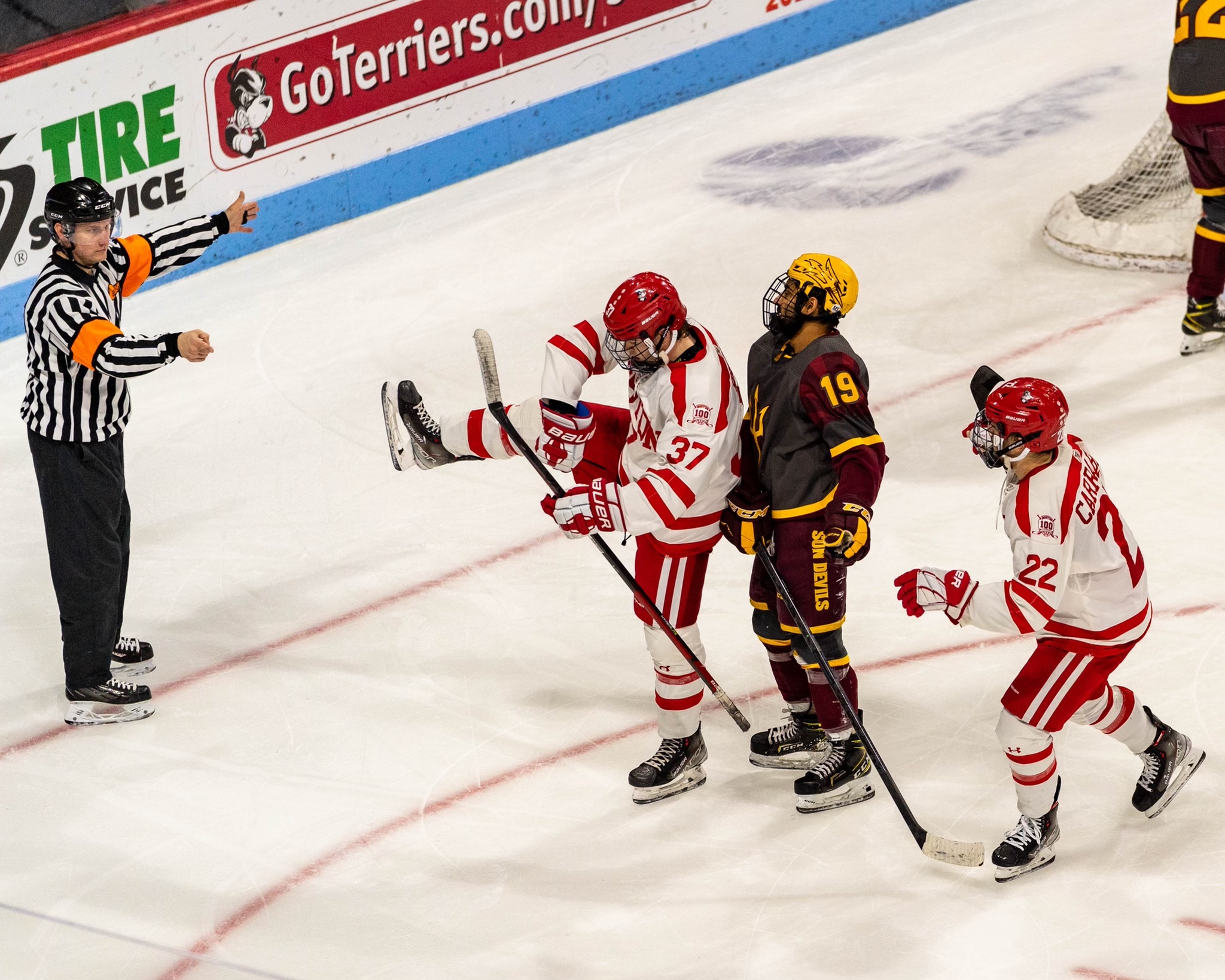 “I thought we had some really timely goals. Especially the ones at the end of the period,” BU head coach Albie O’Connell said after the game. “We’ll take the win. We’ve played well in games this year and haven’t got the results.”

O’Connell was pleased with his team’s offensive output for the weekend, but he was quick to praise his goaltender, Drew Commesso.

“I thought he was a major factor in that game. That’s one of the reasons why we won, and we are hoping that he can be one of our best players every night, and he was tonight.”

The sophomore netminder stopped 36 of the 38 shots he faced in Saturday’s game and finished the weekend with 62 saves on 65 shots.

The Terriers carried the play in the opening period and spent the majority of the opening 20 minutes in the Sun Devils’ zone.

With roughly five minutes to go in the period, first-year defenseman Ty Gallagher got the Terriers on the board.

Matching roughing penalties had the two teams playing 4-on-4 hockey, and junior defenseman Alex Vlasic got the puck down low to O’Brien, who drew ASU netminder Ben Kraws out of position. O’Brien fed Gallagher for a tap-in goal to put the Terriers in front.

Goal 4 for number 4 during 4-on-4. #symmetry pic.twitter.com/NVDUpQntzu

The Terrier’s excellent puck movement was a significant factor on that goal, and they moved the puck efficiently on their second goal as well. With time winding down in the first period, junior forward Robert Mastrosimone sent a cross-ice pass from the right-wing corner that landed right on the tape of junior forward Matt Brown. Brown wasted no time and roofed the puck over Kraws’ blocker as soon as he collected the pass.

Taking you into the second period with Brownie's buzzer beater! pic.twitter.com/emHEWIRDdn

The second period was much more even and featured several chances off the rush. With less than three minutes to go in the middle stanza, junior defenseman Cade Webber fired a stretch pass from just behind his own blue line. The pass connected with Kaufman, who redirected the puck directly to Tuch to give him a partial break. Tuch quickly snapped one over the right pad of Kraws to give the Terriers a 3-0 lead.

What an end to the second period for Luke Tuch! Here's his first of two goals in a span of 1:05. pic.twitter.com/6BWbYqzjA1

On that goal, Kaufman drew a penalty against Arizona State defenseman Ty Murchison, who tripped him as he one-touched Webber’s pass to Tuch. The Terriers took advantage of the ensuing power-play by getting everybody involved and moving the puck quickly. Freshman forward Brian Carrabes won a puck battle down low and nudged it to O’Brien, who fed junior defenseman Dom Fensore at the top of the point. Tuch redirected Fensore’s shot just Kraws’ glove to put the Terriers up 4-0.

The officials reviewed this one, probably to admire Tuchy's redirection, before the score officially became 4-0! pic.twitter.com/rSZfyh5Z28

Tuch now has three goals in his last four games and said after Saturday’s game that he has spent a lot of time working on his game in front of the net and off the rush.

“Playing in front of the net has been a big aspect of my game and going forward in my career too. Also, off the rush. I think both those goals I had [tonight] were areas I definitely worked on in practice. Just quick releases and working in the shooting room has been a big part of it too,” Tuch said.

The Sun Devils carried the play to start the third period, and they finally got on the board when graduate transfer defenseman Tim Theocharidis, who impressed all weekend with his smooth skating ability and poise with the puck, fired a wrist shot through traffic that Commesso was never able to see.

With a little over five minutes to go in the third, the Sun Devils had an opportunity to get back into the game when senior assistant captain Ty Amonte and Webber took back-to-back penalties for BU. The Sun Devils had two shots on goal during the 5-on-3 and two more during the remainder of Webber’s penalty, but Commesso stood tall and kept ASU from capitalizing on the power-play.

According to O’Connell, Commesso has been keeping a problematic BU penalty kill afloat recently.

“He covered up some mistakes, but we have to be better in that area,” O’Connell said. “We had a meeting today about how we played on the penalty kill, and we had some bad reads throughout this game, so we’re going to have to definitely improve there. Even though the numbers look good, some of it was the goaltender, and you need him to be your best penalty killer at times.”

With that being said, BU took most of the wind out of ASU’s sails after killing off the five-one-three, and despite a late ASU goal by Arizona Coyotes prospect Josh Doan, the Terriers held on for a 5-2 victory.

The Terriers now hold a .500 record and will begin a six-game stretch of conference play starting next Friday night against UConn. The puck drop for that game is set for 7:05 p.m from XL Center in Hartford, Connecticut.