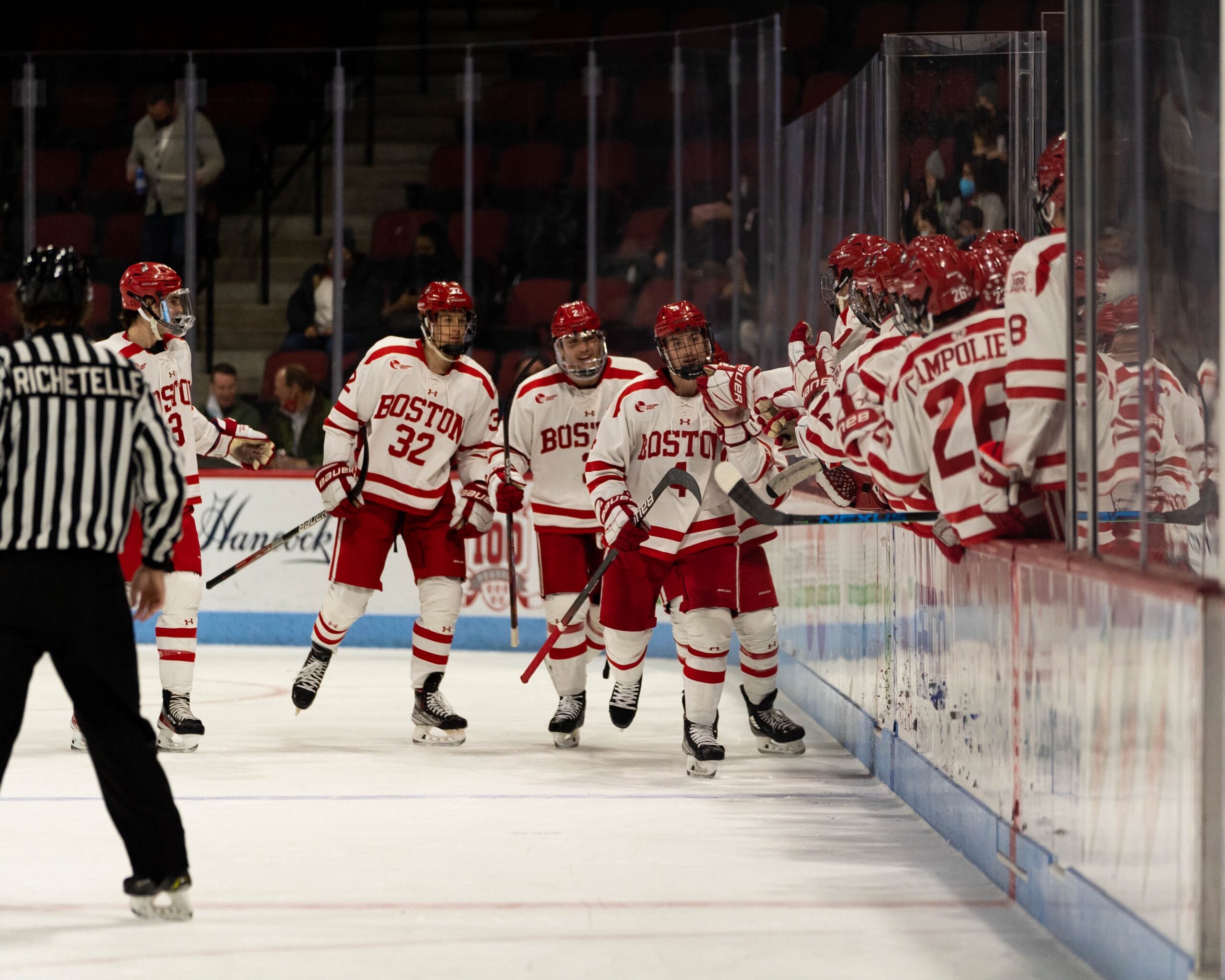 If one of the new year’s resolutions for the Terriers was to dominate on the offensive end of the ice for the remainder of the season, Friday night’s game against the Sun Devils would be a step in the right direction towards checking that resolution off their list.

“From the drop of the puck to the first shift, we were there,” said BU head coach Albie O’Connell. “We had some physicality. … I think it was about as thorough as we’ve played all year.”

Sophomore goaltender Drew Commesso (26 saves) got the start, and seven different players scored for BU, including freshman forward Tristan Amonte who tallied his first goal as a member of the Terriers.

It wasn’t until just under two minutes into the second period that the puck found the back of a net, as Amonte got the scoring going for BU.

Amonte’s older brother and line-mate, senior assistant captain Ty Amonte, got the puck loose down low and passed it to junior forward Ethan Phillips in the right face-off circle. Phillips one-timed a pass to Tristan who was crashing the net and backhanded the puck past the Sun Devil’s net-minder, sophomore Cole Brady (31 saves), to take the lead.

How cool is this? Ty helps set up his brother Tristan's first goal as a Terrier to give us a 1-0 lead! pic.twitter.com/ptHheZvNRp

“It was nice to get on the board for him,” said O’Connell on Tristan’s first goal. “That will give him some confidence because he was in and around it all in that first period. … It was really good to see. I was happy for him. That line played really well.”

The Terriers found the back of the net two more times in the second period, with freshman defenseman Ty Gallagher scoring on the power play thanks to an ASU roughing penalty 7:18 into the second stanza.

Gally sends it top shelf to give us a 2-0 lead! pic.twitter.com/t9Taj8sIl3

BU junior forward Robert Mastrosimone gave the Terriers a three-goal cushion with a highlight-reel goal with less than three minutes to go in the period. Mastrosimone stripped the puck from a Sun Devil defenseman who was attempting to clear the play and walked in on Brady, back-handing the puck into the back of the net.

Just under halfway into the final play of regulation, ASU’s Sean Dhooghe scored his fourth goal of the season to bring the Sun Devils within two. Dhooghe redirected a shot by Matthew Kopperud, to put one past Commesso.

But just over two minutes later, the Terriers responded with a breakaway goal from junior forward Jay O’Brien giving BU their three-goal cushion back.

Good luck trying to stop OB on a breakaway! pic.twitter.com/QfCGzciiIv

The remainder of the third period was all BU as the Terriers would go on to score two empty netters, thanks to forwards Dylan Peterson and Jamie Armstrong, who scored his first goal of the season.

And another power-play goal by junior forward Matt Brown helped seal the victory over the Sun Devils.

ASU is the most penalized team in all of college hockey and has allowed the second-most goals in the NCAA. So for the Terriers to capitalize on the man-advantage twice, it was good to see guys execute, according to O’Connell.

“Our power play was terrible in practice yesterday,” added O’Connell. “It’s never always going to be perfect, but it was good to see guys executed and that’s what it comes down to. To Execution, shooting the puck.”

The Terriers are set for a rematch against the Sun Devils with the tail end of their back-to-back series set for Saturday night at 7 p.m.

On how to keep the momentum going, O’Connell says that his team has to have the right mindset going into the series finale.

“Human nature would be to let up a little and think it’s going to be easy because we scored seven,” said O’Connell. ‘But, there was a lot of hard work and our commitment to winning was high, so we’re going to have to need that again to win.”

Feature Image: Freshman defenseman Ty Gallagher (4) and the Terriers celebrate his goal in the second period of a 7-1 win against Arizona State at Agganis Arena on Friday, Jan. 7, 2021. Photo by Carolyn Mooney.